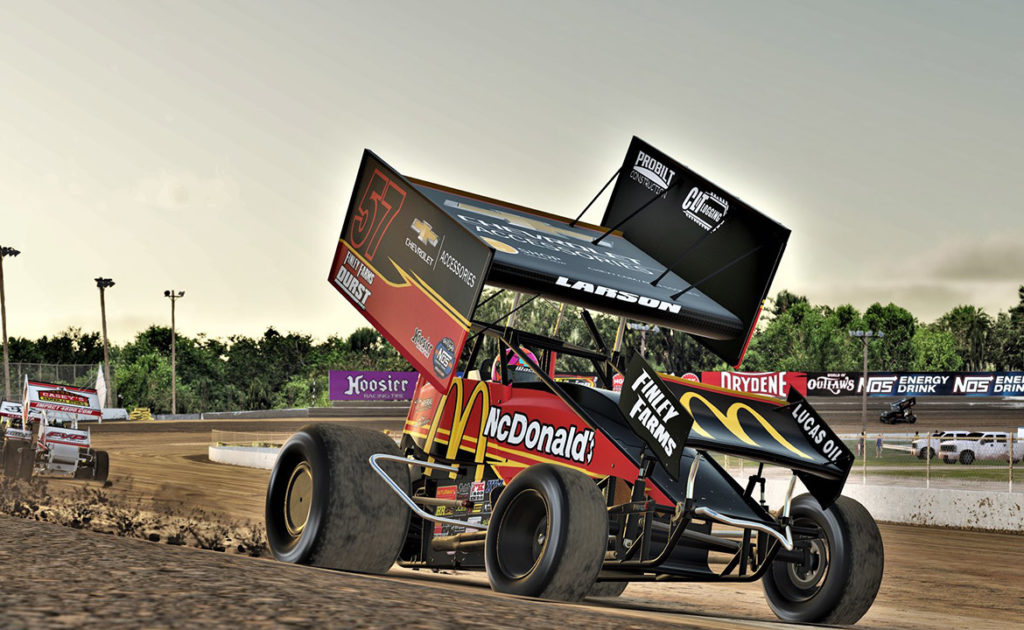 History was made with the World of Outlaws NOS Energy Drink Sprint Car Series last week, making its debut on FOX Sports 1 – its virtual debut. And it’ll be made, again, this week.

The reception was strong enough, with thousands of fans lauding the broadcast, to warrant another round of World of Outlaws iRacing Invitationals on FS1 this Wednesday at 8pm (ET).

That’s only one of the big Sprint Car events this week, too. DIRTVision presented by Drydene will be hosting another iRacing Invitational on Tuesday, and on tap for the #DVWatchParty this Saturday is the fan-favorite 2000 and 2001 World of Outlaws Sprint Car races at Bristol Motor Speedway.

On Tuesday, April 7, The Greatest Show on Dirt takes its turn around the (virtual) Knoxville Raceway for the fourth round of World of Outlaws NOS Energy Drink Sprint Car iRacing Invitationals, live on DIRTVision at 7 p.m. (ET).

The eWinged Warriors have not disappointed with massive slide jobs and tight wheel-to-wheel action every race. iRacing aficionado Logan Seavey won the first round and was then bested by Aussie Jock Goodyer in the second. NASCAR-star and Sprint Car phenom Christopher Bell was the class of the field during the first FS1 broadcast of the race.

With $1,000-to-win, winner takes all, on the line, the Tuesday night event will feature a field of more than 50 entrants and a full night of action with Qualifying, Heat Races, consolation races and a 35-lap Feature.

Then, on Wednesday, April 8, the Pro Invitationals at 8 p.m. (ET) on FS1 will, again, feature a hand-picked field of 20 elite drivers. It’ll be a night of Feature racing only, with the Sprint Cars first and the Late Models directly after.

Johnny Gibson will be back to call both Features with Clint Bowyer and Jeff Gordon providing commentary and Adam Alexander hosting.

The iRacing World of Outlaws NOS Energy Drink Sprint Car World Championship continues tonight, with another big debut. This time, the Pro iRacing series will race at Fairbury Speedway. The race will be streamed live at 9 p.m. (ET) on the iRacing eSports Network.

The Series’ last race, and second of the season, so far, was won by James Eden at Lernerville Speedway. Defending champion Alex Bergeron picked up the first win of the season at Volusia Speedway Park.

DIRTVision is bringing another impressive slate of races and special guests for its Sprint Car #DVWatchParty this weekend.

On Saturday, April 11, at 7 p.m. (ET), Sprint Car fans will get to relive two of the most talked about Sprint Car races to this day, the 2000 and 2001 World of Outlaws NOS Energy Drink Sprint Car Series races at Bristol Motor Speedway. Three-time Series champion Sammy Swindell, Stevie Smith and Eli Gold will be a part of the roundtable discussions to recount the excitement from the famous half-mile track.