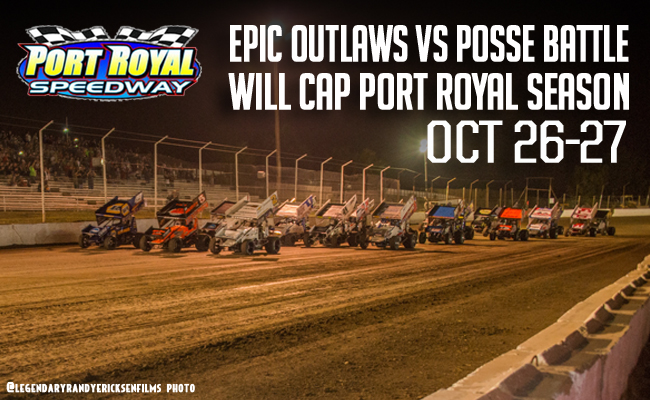 PORT ROYAL, PA — Sept. 11, 2018 — The final 2018 battle between the World of Outlaws and the Pennsylvania Posse will be bigger than ever this year. After persistent rains forced the postponement of the Tuscarora 50 at Port Royal Speedway last weekend, World of Outlaws officials have been working with the speedway to pull together a spectacular season finale at the end of October.

The 51st annual Tuscarora 50, with its unique format, will now be a World of Outlaws event, replacing the second night of the Nittany Showdown scheduled for Friday and Saturday, October 26-27.

The Nittany Showdown, originally scheduled as a two-day event this year, will now return to a one-day format on Friday, October 26, followed by the $51,000-to-win Tuscarora 50 on Saturday for a spectacular Port Royal Speedway Season Finale Weekend.

For ticketholders, Friday’s Nittany Showdown remains unchanged. Wristbands and reserved seat tickets from the originally scheduled Tuscarora 50 will be good for the rescheduled event on October 27. There will be a rain date of Sunday, October 28.

Those with Saturday Nittany Showdown tickets will receive a full refund from the World of Outlaws and should contact Port Royal Speedway after September 17 for tickets to the Tuscarora 50.

Last Saturday, 53 cars were pitside at Port Royal Speedway when rains hit just after qualifying time trials for the Tuscarora 50 had been completed. In hopes of completing the program on Sunday, the slated rain date, speedway officials forged ahead with plans to conduct the event on September 9. However, rains overnight and through the morning on Sunday forced another cancellation.

The World of Outlaws Craftsman Sprint Car Series has competed at the Speed Palace for the past four consecutive years, with nine-time defending Series Champion Donny Schatz scoring the win last year, Pennsylvania native and full-time World of Outlaw Logan Schuchart scoring the dominant win in 2016, this year’s Knoxville Nationals Champion Brad Sweet taking the checkers in 2015, and Pennsylvania’s Ryan Smith scoring the upset victory in 2014.

Meanwhile, if Lance Dewease wins the Tuscarora again on Saturday night in the Don Kreitz No. 69K, it will make Kreitz the winningest car owner in Tuscarora 50 history with six under his belt. He is currently in a tie with other five-time owner winners Al Hamilton and Bob Weikert. Kreitz got three as an owner/driver and currently has a pair with Dewease as driver.

Tickets to Friday’s Nittany Showdown are available online. Reserved seats for the Saturday Tuscarora 50 program, a limited number of which are still available, must be purchased via the speedway office and are expected to go on sale the week of September 17. Orders can be placed by phone beginning September 17 by calling 717-527-4414.