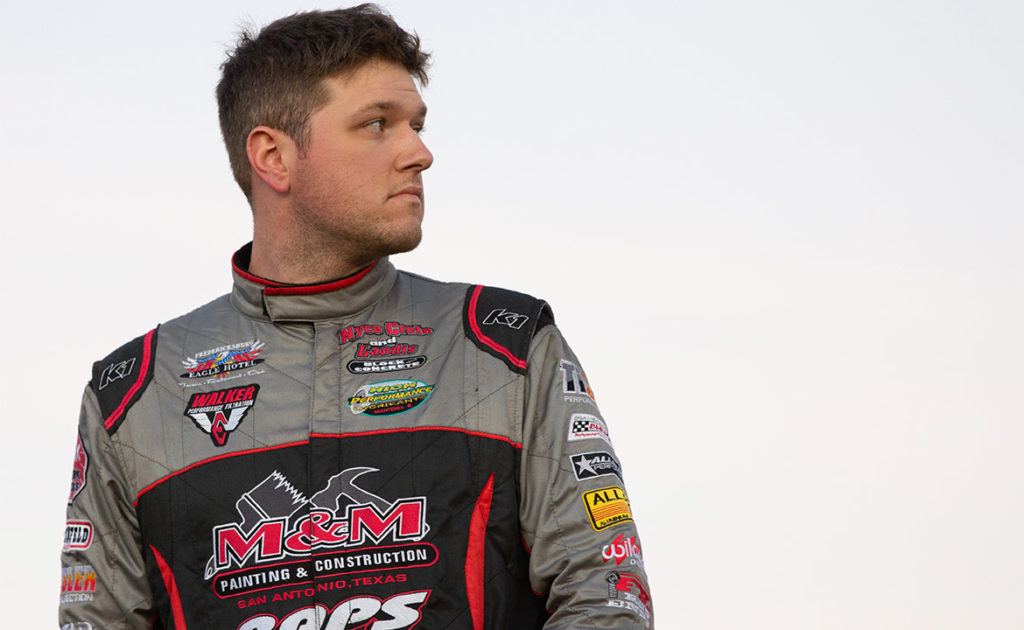 Along with providing drivers a platform to turn laps before returning to real racing, iRacing has also helped give their sponsors much needed exposure on national broadcasts.

Through the World of Outlaws NOS Energy Drink Sprint Car iRacing events on DIRTVision and CBS Sports Networks, drivers and sponsors have been seen by thousands of fans across the world.

For four-time World of Outlaws winner Brent Marks, who joined CJB Motorsports this year, bringing his sponsors with him to help support the team, that exposure has been a huge benefit.

“That’s been a big help for everybody,” said Marks, of Myerstown, PA. “Everyone has been affected by not racing. We still have to do things with the race team to make it worth our sponsors’ time and stay invested in the sport. We tried to do anything we could. It felt like being a part of the DIRTVision and CBS Sports broadcasts helped that and gave them the exposure that they need. Even though it was all virtual exposure, it was still better than nothing at all. At least we were able to do something for them there.” 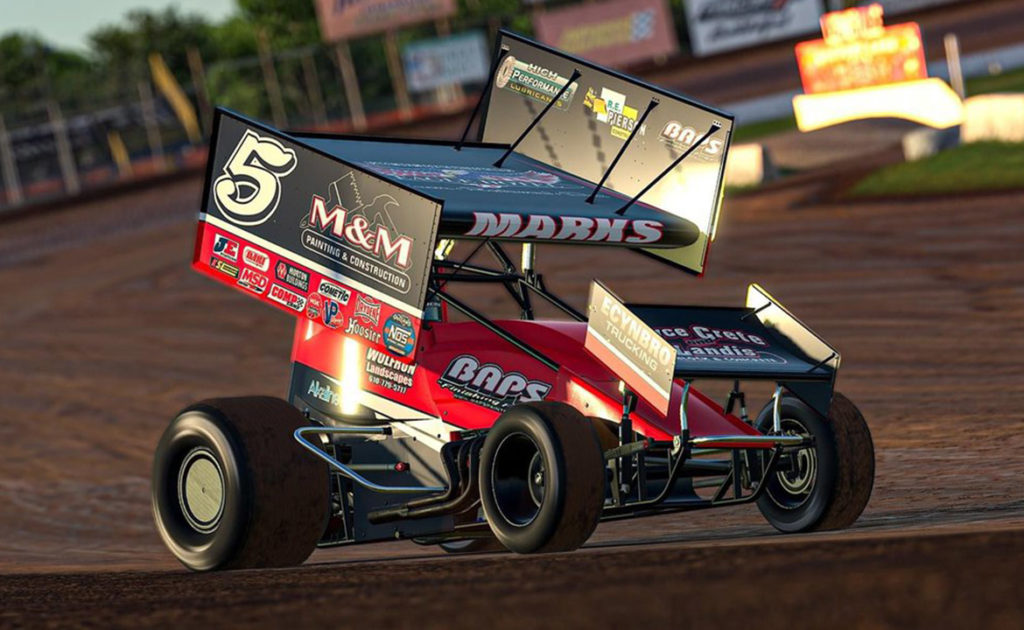 Marks joined the World of Outlaws iRacing Invitationals late, initially not having an iRacing set up. But once he got his Fanatec steering wheel and pedals, he quickly became accustomed to the virtual racing world.

He qualified for his first iRacing Feature at the virtual Knoxville Raceway — out of a more than 60 car field — and finished 16th. His speed progressed with each race, giving him more airtime, but bad luck stood in his way of good finishes at times. Marks was on his way to a top-five finish in the May World of Outlaws NOS Energy Drink Sprint Car iRacing Invitational at Volusia Speedway Park before an ill-tempered Logan Seavey drove into him and wrecked him under caution over a misunderstanding.

However, Marks rebounded the next race, which was broadcasted on CBS Sports Network. He battled in the top-three all night, at times challenged for the win, and earned a third-place finish.

“I’m getting better,” Marks said. “It was a little rough at first to get used to everything. The set ups on this thing is totally different than real life. That’s been a huge challenge and trying to figure out the lines that work best and things like that. Really the biggest thing that’s helped me out the last couple of weeks is trying to get all of my steering wheel settings right. That really helped. It’s been fun, though.”

There are various settings for the sim racing wheels, such as the amount of force feedback you want to feel. That allows you to feel the bumps in the virtual tracks and the handling of the car through the wheel. In talking with experienced iracers, Marks said they told him to turn down the force feedback. That didn’t work for him, though. Used to feeling everything from the seat of his real #5 Sprint Car, Marks needed some kind of feedback. He turned the setting back up and immediately found more speed, citing it gave him a “more realistic feel.”

His involvement in iRacing has gone beyond his racing in the World of Outlaws events, too. With help from Wicked Cushion, Marks has started his own eSports racing team. The five-car team gave Marks another way to provide more exposure for his sponsors — with each sponsor getting its own car — as well as getting to help out a few iracers who compete in iRacing leagues. 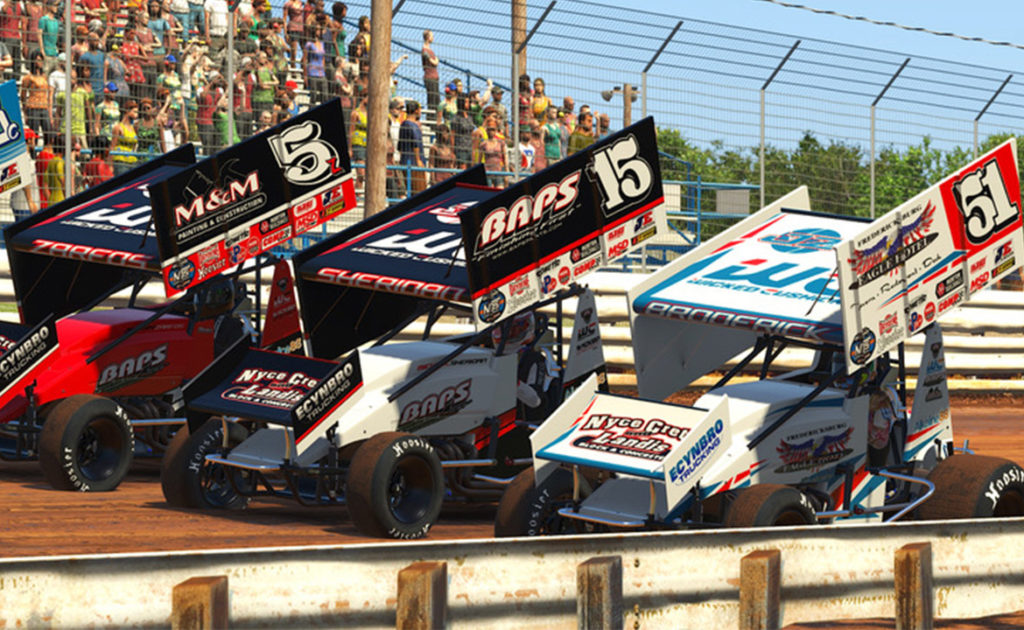 “They’ve been helping me out quite a bit,” Marks said. “I appreciate that. It’s real to them. They love it. It’s cool. They think it’s cool that they’re a part of a team. Trying to get them their own exposure. And each car has its own individual sponsor on it that’s on the CJB car right now. So that’s another cool way to give our sponsors move exposure through another avenue than just me. I think that’s pretty cool, too.”

After a long two months of waiting, he went from iRacing to real racing on Friday as one of the 48 drivers invited to the World of Outlaws’ historic return to racing at Knoxville Raceway. With no fans in the stands, thousands of people around the world watched the race on DIRTVision.

Marks and the rest of the World of Outlaws field of drivers will get that exposure again on Friday, May 22 and Saturday, May 23 when the Series races at Federated Auto Parts Raceway at I-55. There will be a limited crowd of fans, who will be socially distanced around the track. And those not able to attend will again be able to watch all of the action live on DIRTVision.

He finished eighth and 11th, respectively at I-55 last year and will be poised to get another pair of solid finishes to continue building momentum with his CJB team and bring real world exposure to his sponsors. And while the Series and racing world is slowly getting back into a rhythm, Marks still sees more iRacing in his future even when racing gets back into full swing.

“I’ll keep up with it when I have the time,” Marks said. “It’s been cool, and it’s been fun. I’m going to stay involved in it as much as I can. During the off season it’ll be nice to sit down and get some practice in. One thing about iRacing that I think is really cool is the cars are OK, they have some work to do on that yet, but I think the tracks are really realistic. That’s another cool tool to use to learn the tracks a little bit more.”

Marks will be a part of the elite line up of drivers — including David Gravel, Logan Schuchart and Christopher Bell — in Tuesday night’s World of Outlaws: eDirt Racing Shootout on CBS Sports Network at 8 p.m. (ET).

Tickets for the Saturday, May 23 event at I-55 are already sold out, but you can still purchase tickets for the Friday, May 22 event, click here. Tickets are also still available for the May 29-30 events at Lake Ozark Speedway, click here.