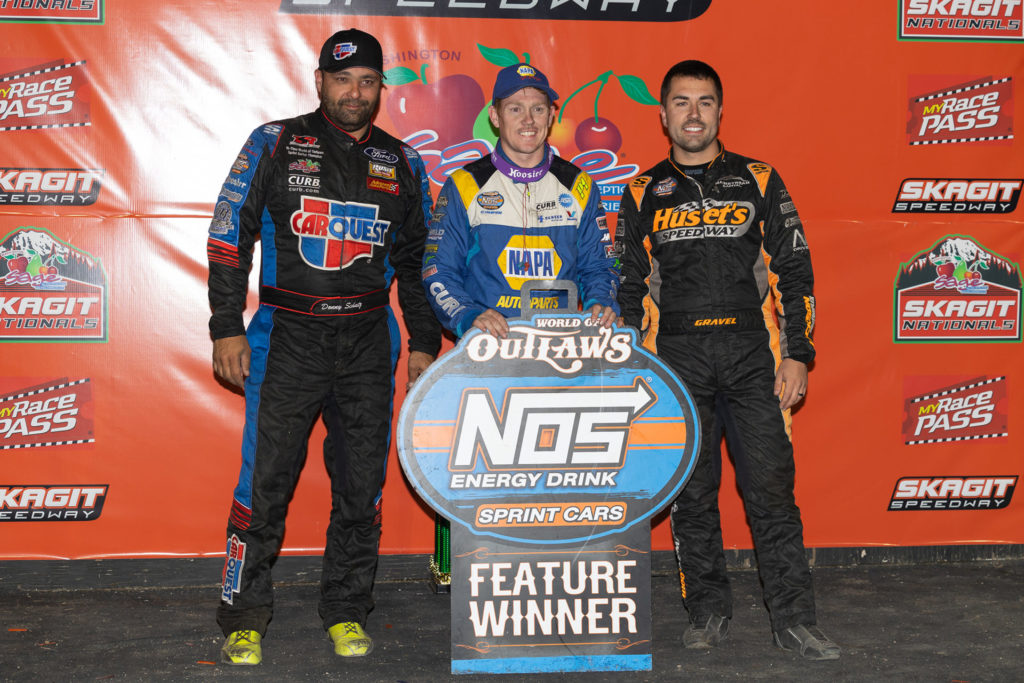 15 Different Winners with The Greatest Show on Dirt This Season

With the 2021 World of Outlaws NOS Energy Drink Sprint Car season behind us, it’s time to look back on how the landscape of the All-Time Wins List changed across the 80-race grind.

Through 44 seasons and 3,500+ Features, only 147 of the best Sprint Car drivers have the right to say they’ve won a race with The Greatest Show on Dirt. A plethora of monumental moments in 2021 was crucial in adjusting the layout of the list and building/creating legacies of these superstars.

The biggest moment of them all came at Dubuque (IA) Fairgrounds Speedway on June 18, when Donny Schatz made history with his 300th career victory. It was an emotional night with parents Danny and Diane in victory lane as the 10-time champion joined Steve Kinser (690) and Sammy Swindell (394) in an elite club. The Tony Stewart/Curb-Agajanian Racing #15 driver tacked on two more wins at Red River Valley (ND) Speedway and I-80 (NE) Speedway to bring his total to 302 wins.

Another iconic night was May 22, when Dave Blaney ended a 25-year absence from victory lane with his 95th career win at Sharon (OH) Speedway. The 1995 Series champion completed a last-lap pass on Sheldon Haudenschild and promptly sent all of Sprint Car Racing into pandemonium as he become the second-oldest winner in Series history. The Buckeye Bullet continues to sit solidly in eighth on the all-time list.

The league leader in wins was Kasey Kahne Racing’s Brad Sweet, who matched his 2019 season-best of 16 victories amid a third straight championship campaign. The Big Cat now has 74 career wins, leaving him only 10 shy of 10th-place Stevie Smith (84) ahead of the 2022 season. The Grass Valley, CA native will try to become the newest to crack the top-10 since 2018 when his then KKR teammate Daryn Pittman (86) did it.

While all 74 of Sweet’s triumphs have come with trusty owner Kasey Kahne, his championship counterpart David Gravel has taken a different path to 69 career wins, slotting him 13th all-time behind Jac Haudenschild (72).

The biggest climb up the charts this season came from Carson Macedo, who enjoyed a career year with 11 victories in his inaugural full-time run with Jason Johnson Racing. The Lemoore, CA 25-year-old snagged wins at Knoxville (IA), Eldora (OH), and Williams Grove (PA), along with a $75,000 National Open score to jump from 53rd to 35th all-time. He’s now tied with fellow Outlaw Kraig Kinser at 17 career wins.

Sheldon Haudenschild continued to show signs of steadfast improvement with Stenhouse Jr. Marshall Racing, recording a career-best eight victories with plenty more to offer. A noteworthy home state win at Eldora and Ironman 55 sweep highlighted his upgrade from 35th to 27th on the all-time list. The NOS Energy Drink #17 pilot enters 2022 with 22 career wins, exactly 50 behind The Wild Child, his now-retired father.

A seven-win season for Logan Schuchart brought him to exactly 30 career wins, an accomplishment that brings him equal with his grandfather and car owner Bobby Allen for 20th on the all-time list. Among the highlights for the Shark Racing, Drydene Performance Products #1S this year was back-to-back Jackson Nationals titles, a first career Gold Cup score, and a third straight Texas Outlaw Nationals.

Before his departure at Roth Motorsports, Aaron Reutzel racked up four wins including the $15,000 Morgan Cup at Williams Grove and $30,000 Huset’s 50 in South Dakota. The Clute, TX native advanced from two to six career wins, matching his hero Gary Wright (Hooks, TX) as the winningest Texas in Series history.

Kyle Larson followed his record-breaking 2020 campaign with a stellar encore in 2021, highlighted by a Memorial Day win at Lawrenceburg, his first Kings Royal crown at Eldora in July, a $176,000 payday with his first Knoxville Nationals title in August, and a National Open preliminary win in October. The Elk Grove, CA native now has 24 career wins through 109 starts (22% winning percentage), which has the reigning NASCAR Cup Series champion tied with Ron Shuman for 25th all-time.

Madsen climbed aboard the Tony Stewart/Curb-Agajanian #14 and snapped a nearly three-year, 106-race drought by sweeping the Jackson Nationals prelims. He added a Port Royal W to hit 28 career wins, placing him 22nd all-time as the winningest Australian.

For Marks, he returned home to his family-owned operation and immediately found speed aboard the #19. Wins at Eldora, Williams Grove, and Charlotte took “The Myerstown Missile” to seven career wins in a tie for 53rd all-time.

Northern Territory’s James McFadden became the fourth Australian to tackle a full Outlaw tour, and thus doubled his win total from two to four aboard the Kasey Kahne Racing #9. The reigning Rookie of the Year will enter 2022 tied for 68th all-time as he prepares to transition to the Roth Motorsports #83 for his second slate with the Series.

This season, we added two brand new names to the list, and both were Hoosier’s. Lebanon, IN’s Spencer Bayston earned his career-first at Attica’s Brad Doty Classic, while Indianapolis, IN’s Tyler Courtney made his maiden voyage to the grand stage in spectacular fashion with a $175,000 score at Eldora’s Kings Royal.

Bayston, who will join the World of Outlaws full-time in 2022, added another win at Port Royal to kickstart his new relationship with CJB Motorsports on the right foot. In doing so, the 23-year-old became only the 30th driver to win his first and second-career Feature in the same season.

19-year-old Giovanni Scelzi became the 15th and final driver to win with the Series this year, delivering his first win for KCP Racing and putting him in a tie for 72nd all-time at three career wins.

The all-time wins list will be adjusted again when the World of Outlaws NOS Energy Drink Sprint Cars’ 2022 season kicks off Feb. 10-12 at Volusia Speedway Park for the 51st DIRTcar Nationals. Fans can BUY TICKETS HERE or watch every lap LIVE on DIRTVision if you can’t make it to the track.