McMahan Wins Prelude to the Ironman 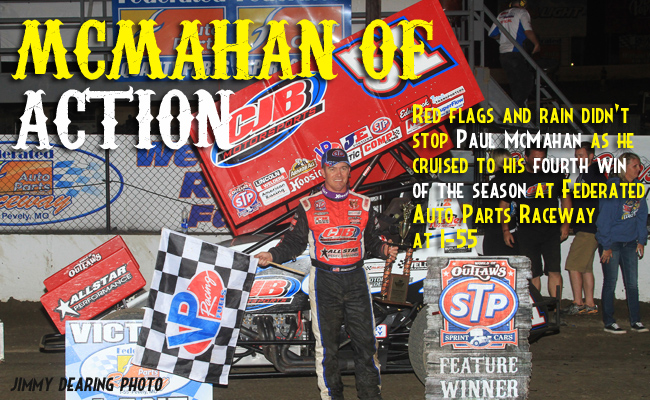 PEVELY, Mo. — Aug. 1, 2014 — The Monroe Shocks & Struts Prelude to the Ironman at Federated Auto Parts Raceway at I-55 proved to be a long event that saw rain delays and a two hour red flag to repair damage to a catch fence – but none of that slowed Paul McMahan as he held off Kerry Madsen and drove to his fourth World of Outlaws STP Sprint Car Series win of the season Friday night.

Rain fell early on in the day at I-55, but it was a bizarre wreck in the night’s second heat that delayed the feature into the early morning hours of Saturday. With two to go, a wreck involving then second-place running Cale Thomas, sent the young driver into the catch fence in the middle of turns one and two. A large portion of the fence was ripped out and racing action stopped as maintenance crews worked to repair the gap.

Two hours and a rain shower later, racing returned to the track and Kerry Madsen won the heat.

Thomas was OK. He went on to win the Last Chance Showdown and compete in the A main before being knocked out in another wreck early on.

The night though belonged to McMahan, who dominated the feature and held off Daryn Pittman and Madsen to win.

“First, I’ve got to thank all these fans for sticking around here because I know how late it is and I tell you what, I was one of the guys hoping they would cancel it – but thank God they didn’t tonight,” said McMahan, driver of the CJB Motorsports car. “Hats off to all the track maintenance guys that busted their butts and got that fence back together because when it first went down, I didn’t think we had a chance of racing tonight.”

As the green flag fell on the feature, Pittman took a quick lead as a caution flew before one lap could be completed. When the race returned to green, McMahan took over the lead position through the first few laps.

“Daryn actually got a better run off the bottom,” McMahan said. “I think he was just committed to running the bottom there on the first lap and I was able to power around the outside to get by.”

“When you’re out front early in the race you really don’t know where you want to be. I just saw what he did there on the first two starts, what he did to me in the dash and was able to get the jump. I get to control the restart being the leader there so I took off a little early and got a good run up off the corner and was able to get to the top.”

McMahan said lapped traffic around the track presented him with trouble during the feature.

“It’s so fast around the top and you really got to slow down to hit the bottom and I really didn’t want to slow down that much,” McMahan said. “I got in there behind Cody [Darrah] and I tried to slide him one time and I couldn’t get by. He was fast enough to stay up front so I just figured I would follow him around and hopefully no one would get by me.”

McMahan scored his fourth win of the season. He is currently third in the championship points standings, 167 points out of the lead.

Kerry Madsen, who started the feature in the sixth position and battled his way through the field, nearly had his night ended on lap eight as got too far into the cushion and slowed dramatically.

“I was just kind of tight and got too aggressive and nearly threw it all away,” said Madsen, who ended up not losing any positions with the incident. “The guys gave me a great racecar, absolutely. It was a fun track.”

In the final laps, Madsen worked his way through lapped traffic in his American Racing Custom Wheels car and closed the gap on McMahan. In the final lap, in the final turn, Madsen tried sliding McMahan but was not able to clear the pass.

“Actually, I’ll be honest, I thought I was going to get Paul,” Madsen said. “I thought, let’s be patient, wait until we get the right move and I could make that move in three and four. I wish I would have tried a little harder earlier. He drove a great race, congratulations to the CJB team and great result for us – second. We’re definitely proud with that.”

Points leader Donny Schatz brought his STP/Armor All car home to a third-place finish – his seventh podium finish in a row. Schatz said he and his team were hoping to have a car that would allow them to get up and challenge for the lead.

“Got a little past our bedtime, so we kind of fell off a little bit,” Schatz said.

“The bottom was pretty good the first part there. Every lap it just kind of went away awful quick. And you had to be up on the top making speed. Once you got up there it was pretty hard to pass unless you had traffic. We were going around some cars so fast there really wasn’t an opportunity to get one that was racing with someone.

“We had a decent car. I guess we got a top-three. That’s better than the alternative… but we want to win. Tomorrow night is 55 laps and we’ll be a little better.”

Schatz maintains his 106 point lead over Pittman in the race for the championship.

David Gravel took home his seventh quick time of the season. Only McMahan and Joey Saldana have more quick times so far in 2014.