McMahan Wins at I-96 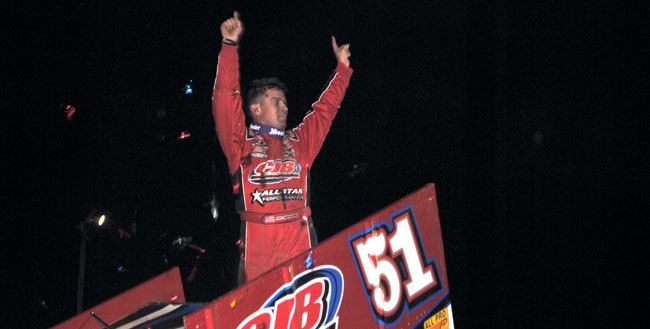 McMahan was running second with eight laps to go when leader Donny Schatz slid too high up the half-mile track and slipped back to third. Shane Stewart had been running third and went past both Schatz and McMahan to grab the lead, but on the very next lap Stewart also drifted too high like Schatz, giving McMahan a chance to seize the lead. McMahan, who had earlier set a track record in qualifying, made the most of his opportunity by leading the final seven laps for his third victory of the season and his second win in the past three races.

Schatz settled for second with Joey Saldana, hard-charger Craig Dollansky and Jason Sides rounding out the top five. Stewart eventually came up a lap short on fuel and finished 17th.

McMahan became the second driver this season to qualify with the quick time and go on to win the event, joining Daryn Pittman, who accomplished the feat on May 21 at New Egypt (N.J.) Speedway.

Schatz was in command for the first 22 laps, pulling away on the initial start and three ensuing restarts after cautions, before he missed his mark.

“I just didn’t really see where I was going you know, I had trouble when I got up to lapped traffic, you couldn’t really judge it was a little bit of a dark spot,” said Schatz, driver of the Tony Stewart Racing STP/Armor All J&J. “I just made the mistake, I misjudged where I was at and I was carrying a lot of speed and blew right through (the cushion). It dug the front end in and got lucky we didn’t tear anything up and were able to finish.”

Saldana advanced from seventh to finish third as his new team continues to gel.

“We’ve been struggling lately, so to come out of here with a third, I think Shane Stewart must have run out of fuel or we would have run fourth,” said Saldana, of Brownsburg, Ind., and driver of the Motter Equipment/Fatheadz Eyewear Eagle. “We just had a good solid run all night. It seems like if you’re off a little bit here you’re off a mile and we’ve been off a mile here lately so it’s nice to get a good solid finish here tonight.”

Dollansky methodically advanced through the field to earn a fourth-place finish after starting 13th, giving him the KSE Hard Charger award.

McMahan started the night by taking the top spot in qualifying with a time of 14.731, a new track record. Saldana held the previous track record of a 14.834. With a dash draw of six, McMahan made the best of the situation by picking up two spots to start outside of the second row in the feature event.

Kasey Kahne Racing teammates, Daryn Pittman and Cody Darah, both had tough nights. Darrah’s rough luck started in qualifying where a sour motor relegated him to the final qualifying spot. Pittman’s night was on a much better pace, he was running second through 13 laps, but a cut tire forced him to the work area. He rebounded to finish 13th and now has a 157-point lead over Schatz in the championship standings.

The World of Outlaws STP Sprint Car Series is back in action on Wednesday night at Kokomo (Ind.) Speedway.

NOTES – Paul McMahan set quick time in qualifying at the semi-banked half-mile oval in 14.731 seconds. … Donny Schatz, Kerry Madsen, and Shane Stewart won heat races. … The dash draw was a 6 for the 18th time this year. … Donny Schatz won the dash for the fourth time this year. … Bill Rose had trouble with his truck and transporter and was not able to make it to the event. By rule, as a full-time touring racer, Rose received 50 points in the championship standings.

WE’RE ONLINE – Make sure to check out WoOsprint.com for the latest news and results, plus exclusive driver interviews, video and pictures. Also listen to every event live at DIRTVision.com.