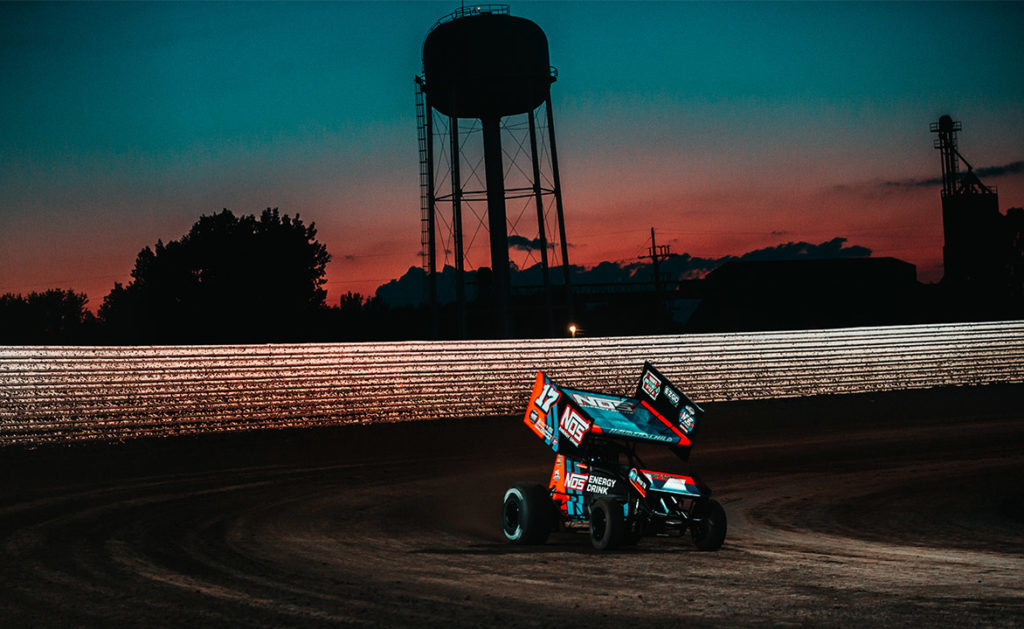 Stenhouse Jr.-Marshall Racing on a hot streak in early half of 2020

The start of Sheldon Haudenschild’s 2020 season has a much better look than the start of 2019. However, he wouldn’t mind this weekend at Cedar Lake Speedway to be a repeat of last year.

The Wooster, OH driver has collected nine top-five finishes and 13 top-10s in the first 17 races of 2020. Last year, he had only three top-fives, seven top-10s and had failed to make four Feature events in a row in the same number of races.

He’s been knocking on the door of a win for the past several weeks, leading laps at the AGCO Jackson Nationals and putting himself in contention to win at a variety of tracks. While he’s been unable to seal the deal, he’s confident in his Stenhouse Jr.-Marshall Racing team, confident in himself and excited to return to Cedar Lake Speedway during the three-day mega event that, for the first time outside the World Finals, will feature the World of Outlaws NOS Energy Drink Sprint Cars and Morton Buildings Late Models.

“It’s one of my favorite tracks,” Haudenschild said about the Wisconsin speedway. “It always seems to put on a good race. Hopefully we can kind of repeat last year and coming out of there with two podiums would be good.”

The doubleheader weekend event at Cedar Lake last year turned into a doubleheader single-day show due to rain. In the first Feature during the day, Haudenschild started eighth and ripped the top to charge through the field and pass 10-time Series champion Donny Schatz for the lead. He parked his NOS Energy Drink #17 in Victory Lane and then finished sixth in the second Feature of the night.

He and his team found better consistency throughout the year after that win. They found themselves in the top-10 more often and never missed another Feature. Haudenschild also went on to dominate the Ironman 55 at Federated Auto Parts Raceway at I-55.

A win this year at Cedar Lake this could open the flood gates to a consistent winning streak with the way his team has been performing. He contributes part of that to the entire team getting along and enjoying racing.

“We all have a lot of fun,” Haudenschild said. “Drew, Kyle and Nickolas, they all work really well together. When I show up, I have a lot of fun and it shows up on track. If we keep doing that the results will keep coming.”

Crew chief Kyle Ripper and crew member Nickolas Goodfleisch were new additions to the team this year. Ripper and Haudenschild already had chemistry together, having worked together when Haudenschild ran his own #93 car a few years. That’s proven to be a benefit with their performance, so far.

They built together momentum at the three season opening races during the DIRTcar Nationals in February. Haudenschild finished 11th the first night, eighth the second night and fourth the third night. Then COVID-19 put racing on hiatus before then could keep it rolling.

When racing resumed in May at Knoxville Raceway, Haudenschild had to transfer into the Feature through the Last Chance Showdown but made a charge from 21st up through the field before flipping in Turn 3. He then finished eighth a I-55 and returned the next night with a chance to win at the track but jumped the cushion while leading and flipped.

Since then, he’s only finished outside the top-10 once – with an 11th-place at Lake Ozark Speedway – and has regularly found himself competing in the top-five. Being able to get in a rhythm of racing every weekend has helped, he said.

“Now, giving us a little bit of time to work together and get some racing in has definitely helped,” Haudenschild said.

There will be three days of racing at Cedar Lake Speedway this year with full attendance each night. Thursday night will feature Qualifying for Friday and Saturday’s events and a special $3,000-to-win Showdown race. Friday and Saturday nights will consist of full race programs including Heat Races, Last Chance Showdowns, and a pair of $20,000-to-win, $1,000-to-start Features – 35 laps each for Sprint Cars.

Saturday’s Feature will also be broadcast live on CBS Sports Network – another reason Haudenschild said he is looking forward to the weekend.

“It’s great for our sport and our sponsors,” said Haudenschild, who has been sponsored by NOS Energy Drink for three years now. “Hopefully we can put on a good show for all of the fans at home and see how it goes.”

You can purchase tickets to the three-day show at Cedar Lake by clicking here.