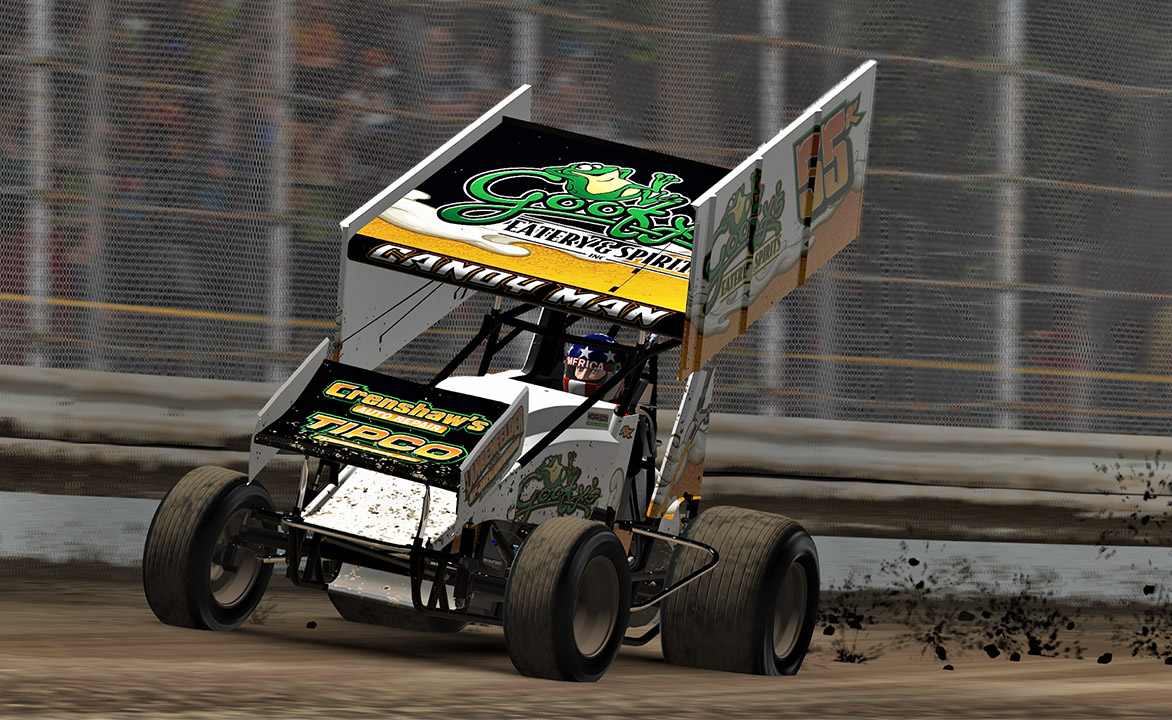 Up until the past few weeks, Robbie Kendall was a quiet part of the Pennsylvania racing community. Now, even with motorsports world on pause, Kendall has used his iRacing skills to become a household name with World of Outlaws fans around the country.

In the first six rounds of the World of Outlaws NOS Energy Drink Sprint Car iRacing Invitationals the 28-year-old from Catonsville, MD has found himself at the front of the field each time.

While bad luck has kept him from a win, so far, he’s been able to market himself and his sponsors through national broadcasts.

“It was awesome,” Kendall said. “I was thankful that everyone with the Outlaws gave me the chance to run with them. Probably the nervous I’ve ever been on an online game was those two races (on national TV). We were competitive.”

Like many drivers, amateur and professional, Kendall started out racing quarter midgets. He then moved up to Micro Sprints before eventually becoming a 410 Sprint Car driver, which he’s done for the last six years. He and his low budget, family owned, HKB Motorsports team commonly race at Pennsylvania tracks like Port Royal Speedway, Williams Grove Speedway and Lincoln Speedway — including World of Outlaws at those tracks and Lernerville Speedway.

“I try to hit them all,” Kendall said. “Anywhere there’s a big race. We’re not married to one racetrack.”

His iRacing experience began in 2017 when he first got on sim racing. He spent a year using the simulator before putting it aside when he bought a house and had a child.

When the World of Outlaws announced it would it would be hosting weekly iRacing Invitationals for its Sprint Car and Late Model Series, Kendall got back on and joined both leagues for “a little fun.”

He’s led laps in three of the six Sprint Car Invitationals — including the virtual Knoxville Raceway event on national television – and finished runner up in the inaugural event.

While the lack of picking up a win can get frustrating at times, just like in real life, it has yet to diminish the fun he’s been having.

“Keeps your head in the game,” Kendall said. “It’s competitive. I like it. I’ve been having a lot of fun. The guys on there are pretty good. Keeps you on your toes. It’s been a blast so far.”

In the first two races he was able to give his real-life sponsor Goofy’s Eatery & Spirits and then has sported to colors of a new sponsor about each week after. He’s hopeful that his iRacing success could turn into more sponsorship opportunities for his real #55k car and more exposure for the sponsors he’s highlighting.

“I started off the first couple of weeks running my own car,” Kendall said. “That was my Goofy’s car that I ran once last year. We had a deal to run it a couple of times this year at big races this year. I asked around a little bit, try to show off people who are shown off in the real world but not showed off in the game. I got a couple of deals worked out. It’s been a blast. Hopefully I’m helping them out a little bit.”

“I actually kind of struggle there in the game,” Kendall said. “I’m going to have my work cut out for me. As long as I put a good lap down, I’ll be alright during time trials. I just can’t get the car stuck in Turn 3 like I can in real life.”

Once racing resumes, you’ll also see his name among those of the Outlaws when the Series returns to Pennsylvania and he plans to try and run the Kings Royal at Eldora Speedway and Knoxville Nationals at Knoxville Raceway.

The World of Outlaws NOS Energy Drink Sprint Car iRacing Invitational at the virtual Williams Grove Speedway will be Tuesday, April 21, on DIRTVision at 7 p.m. (ET).