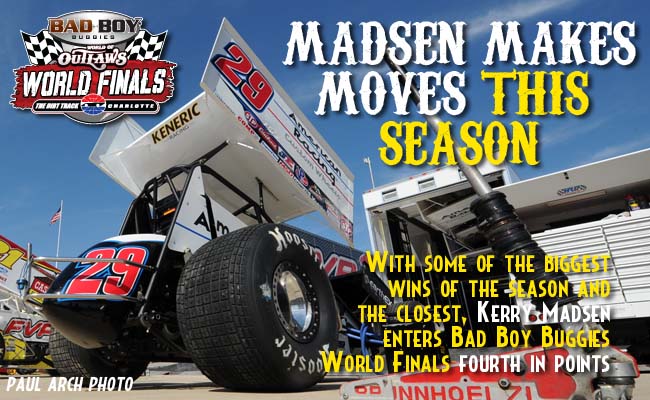 Madsen Made Moves This Season

CONCORD, N.C. – Nov. 4, 2014 – With new crew chief Tyler Swank at the helm and new sponsor American Racing Custom Wheels on board, 2014 was a season of promise and opportunity for Kerry Madsen and his Keneric Racing Team.

From DIRTcar Nationals to World Finals, the season didn’t disappoint for Madsen.

Along the way Madsen scored some of the most coveted prizes on the World of Outlaws STP Sprint Car Series schedule and became the owner of the closest victory in series history.

A last lap pass at the FVP Western Spring Shootout gave Madsen his first win of the year at the Stockton Dirt Track. He then went on to score victories at El Paso Speedway Park and Lakeside Speedway.

The defining victories of the season were to follow.

His biggest win of the year – and of his career – came in July at the legendary Kings Royal at Eldora Speedway. The race, which Madsen credited with getting him interested in sprint car racing, had long been on his radar. And he came close in previous seasons. 2014 was the year.

Madsen started in seventh and powered forward, passing David Gravel on lap 13 to take over the lead. Through cautions and challenges from Gravel and Donny Schatz, Madsen held firm. When the dust settled, Shane Carson crowned Madsen, King Kerry the 31st.

“I just want to thank Eldora Speedway for just letting me be part of this fantastic race,” Madsen said in victory lane. “I moved over from Australia and this is pretty much the race that hooked me on American racing.”

The win came in the midst of an impressive run of eight podium finishes in a row for Madsen.

At Federated Auto Parts Raceway at I-55 Madsen proved to be the strongest man, holding off Donny Schatz and taking home the Ironman title.

“It feels bloody awesome! I can’t believe it! This is one of the races you want to win,” Madsen said. “Man, that track, I just hammered down man. That was a lot of fun.”

In one of the stranger moments of the 2014 season, Madsen became the owner of the closest win margin in World of Outlaws STP Sprint Car Series history. As the series made its final West Coast stop at Antioch Speedway Madsen looked poised for a strong performance. On the final lap, after leading 23 of the 29 laps, Madsen drag-raced Kyle Hirst to the checkered flag – he beat the young driver across the finish line by just .005 seconds.

Without a doubt, this season has been one for the record books for Madson and his Keneric Racing team. As they take on the Bad Boy Buggies World of Outlaws World Finals at the Dirt Track at Charlotte, the driver sits in fourth in the championship standings, locked in a tight battle with Joey Saldana for the position.