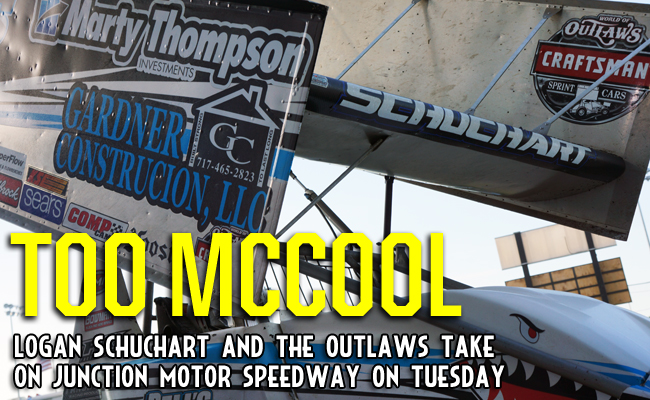 MCCOOL JUNCTION, Neb. — August 12, 2016 —The 2016 season has been a breakout one for Logan Schuchart with the World of Outlaws Craftsman Sprint Car Series. After coming very close to winning on several occasions over the last couple of years, the 23-year-old scored his first Outlaws win earlier this season and has been in contention for a handful more.

The Pennsylvania native looks to keep his strong season going as he returns to Junction Motor Speedway in McCool Junction, Neb., on Tuesday, August 16, as the World of Outlaws Craftsman Sprint Car Series is presented by Henderson Irrigation, Friesen Auto Group, Penner’s Tire Pros, Sutton Electric Inc., Todd’s Body and Glass, Southeast Community College and a special thanks to Bill Otto. Schuchart was the KSE Hard Charger Award winner last season at Junction, powering his way to an eighth-place finish, after starting 15th.

“Junction (Motor Speedway) is a fast track,” said Schuchart. “You need a very strong motor for it. We go there right after the (Knoxville) Nationals, so we’ll have a solid motor in the car. We got going pretty good in the feature there last year, so hopefully we can do that again. We were able to move around a bit and I ran up against the wall and had some fun. Hopefully we can have some fun again.”

Schuchart picked up that elusive first World of Outlaws Craftsman Sprint Car Series on July 8 at Cedar Lake Speedway in Wisconsin. He certainly earned it, as he held off seven-time and defending series champion Donny Schatz en route to the victory. Schuchart nearly won at Weedsport Speedway in New York, back in May, leading 30 laps, only to have Schatz get by him with five circuits remaining.

“The win definitely lifted a little pressure off us,” said Schuchart. “I hope that we keep getting closer and closer. We ran fourth at Ohsweken (Speedway in Canada) a few races ago and started 14th. I wish we had started up front a little bit more there and I think we could have had a shot at Donny (Schatz) in that one. Slick tracks are what we like, so hopefully when we go to Junction, it’s slick and we can move around a bit. We like all the track and are trying to make ourselves better at all of them.”

Schuchart, who is part of the two-car Shark Racing team, which is owned by his grandfather, Hall of Famer, Bobby Allen, approaches each race as its own entity. While the team may not have the budget or resources that many of their competitors have, they make the most of what they do have and put forth their best effort every time they hit the track.

“Every race is its own game and every one of these is hard to win,” he explained. “We just try to make ourselves better at each race and progress as the night goes on. Where you end up is where you end up. We do the best we can every time we hit the track and some nights are better than others.”

While the format in place this season with the World of Outlaws Craftsman Sprint Car Series puts a large emphasis on time trials, it also allows a driver an opportunity to work their way from further back in a heat race into a position to make the dash or at least move up a couple of rows in the main event starting lineup. On the night that Schuchart won, he timed in 10th-fastest and was able to race his way to second in a heat race to earn a spot in the dash, where he finished second to start on the front row of the A-Feature. Schuchart traded the lead with veteran driver Joey Saldana a couple of times in that race en route to scoring the win.

“Time trials has always been important,” he noted. “You have to be good the whole night, every time you hit the race track. The goal is to always finish up front, no matter if it’s a heat race, the dash or the feature. If you time trial well, then you can work to stay up front in the heat race and that will put you in a good spot for the dash and feature. That’s how you put yourself in a position to reach victory lane and that’s our goal each night.”

When the World of Outlaws Craftsman Sprint Car Series rolls into Junction Motor Speedway on Tuesday, August 16, around 25 nights of racing will remain on the season. Schuchart would like nothing more than to add a few more wins to his resume before the season ends. Through action on August 11, Schuchart is eighth in points, with one win and 22 top-10 finishes, of which seven are top-five performances. He also has been fastest in time trials on two occasions in 2016.

“Hopefully we can pick up a couple of more wins,” said Schuchart, when asked about his outlook for the rest of the season. “One is not enough and it’s not enough for anybody. We have enough races left on the schedule and we have been rolling pretty well lately, that I think we can pick up a couple more wins. We’ve learned a lot this year and I think we can put ourselves out front if we keep working hard and putting ourselves in good positions.”