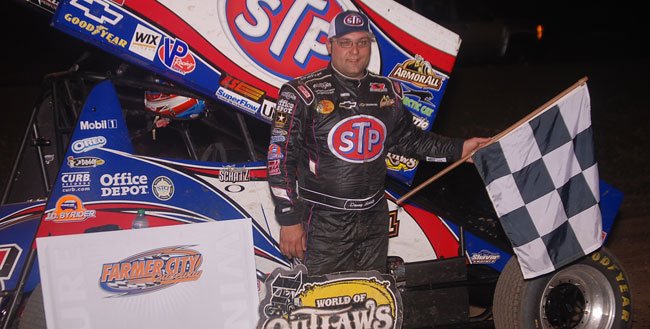 FARMER CITY, Ill. — April 25, 2012 — There were nearly a half-dozen drivers within striking distance of the lead eight laps into the World of Outlaws feature at Farmer City Raceway on Wednesday.

As the competitors banged wheels and narrowly negotiated lapped traffic, the packed stands took advantage of the first World of Outlaws Sprint Car Series event at the high-banked, quarter-mile oval since 2003.

“When we got to lapped traffic the first go-around, there were four or five guys that could have got the lead at any point,” four-time Outlaws champion Donny Schatz said. “It was like a hornets nest. We needed to stay out of that situation and that we did. When the race restarted those guys were all beating and banging on each other around there, and I just stayed out of the way on the bottom and got through there.”

The excitement elevated a few levels on a restart following a caution on lap 13 when Shane Stewart and Cody Darrah collided in turn two. Polesitter Kerry Madsen, who led from the drop of the initial green flag, and runner-up Daryn Pittman spun in turn one in front of the field.

Sammy Swindell, who was running fourth, had nowhere to go and skidded into the duo as they slid toward the middle of the track. Third-running Craig Dollansky slid off the top of the track and nearly tipped over during the process to avoid the melee as cars were sideways trying to avoid the mess.

Schatz was there to capitalize. After restarting fifth and maneuvering through the mess, he inherited the lead. Schatz led the final 28 laps of the race to become the first three-time winner this season.

“On the start I got next to Dollansky and he got a good run off into the corner and I needed to slow down because I saw cars in front of us,” he said. “I just went to the bottom and was lucky enough to miss them.

“It doesn’t help to have guys fall out in front of you. We like earning these races. We’ve earned plenty of them, but we’ve had them go that way against us (as well). You had to be smart and stay out of the trouble, and that we did.”

The race was anything but over at that point. Brad Sweet, who went from sixth to second during that restart, stayed within a car length of Schatz for most of the race as the track slicked off with each completed lap.

“I’d like to try it over again,” Sweet said after a season-best second-place finish. “I don’t really know if I could have done anything different. I was just really trying to take care of my tires. It was really slick down in turns one and two. When I was coming off (turn) two I was just trying to take care of my tires and it was kind of on the cushion in (turns) three and four.

“Donny just never made a mistake. I was right there. If he would have made one little mistake or we got some traffic, I think we could have at least made a race out of it. I don’t know if we would have been able to beat him or not.”

Kraig Kinser charged from seventh to third. After losing a couple of positions in the opening laps, he took advantage of the wild restart.

“We were fortunate that we avoided some of the collisions there early in the race and got away with a pretty respectable finish I think,” Kinser said.

He moved to fifth after the restart on lap 13, passed Austen Wheatley for fourth place on lap 15 and eventually worked by Danny Lasoski for the podium finish on lap 23.

Lasoski placed fourth and Brady Bacon charged from 17th to fifth. Joey Saldana was sixth and Steve Kinser drove from 22nd to seventh to earn the KSE Hard Charger Award. Randy Hannagan advanced from 18th to eighth and Chad Kemenah from 23rd to ninth. Wheatley rounded out the top 10.

Madsen, Wheatley, Dollansky and Kraig Kinser each claimed heat race wins and Bacon won the Last Chance Showdown. Sweet turned the quickest lap in qualifying with a time of 10.609 seconds.

Complete results will be posted after Victory Lane.

(9:50 p.m.) Caution on a restart of lap 21 when Kerry Madsen and Chad Kemenah collided in turn four.

(9:43 p.m.) Sammy Swindell and Craig Dollansky were unable to make repairs in time and the race has restarted.

(9:40 p.m.) All four drivers went to the work area with Craig Dollansky being towed. Kerry Madsen and Daryn Pittman have returned to the track. Pittman has no front wing.

(9:36 p.m.) Oh man! The top four just crashed in turn one on the restart. It looked like Kerry Madsen and Daryn Pittman got sideways and couldn’t save it as Sammy Swindell had nowhere to go and ran into them. Craig Dollansky swerved high and slid off the track, coming to a stop outside turn two.

Madsen and Pittman made contact exiting turn four on lap 10 in a similar circumstance that happened Saturday between Dollansky and Joey Saldana. However, Pittman was able to save the car after getting sideways and continued to battle Madsen for the top spot.

(9:22 p.m.) Cars are being pushed off. I can see flashes of lightning in the distance.

(8:47 p.m.) Kerry Madsen led all eight laps to claim the dash and earn the pole for tonight’s 40-lap feature. Here are the dash results:

(8:42 p.m.) The dash is on the track. There is some bad weather heading this way, so we’re going to try to get through everything.

(8:34 p.m.) A “six” was drawn in the pill draw for the dash, which puts fast qualifier Brad Sweet on the outside of the third row. Here is the dash lineup:

(8:15 p.m.) Jim Moughan and Brady Bacon start on the front row of the 12-lap Last Chance Showdown. Here is the lineup:

(8:02 p.m.) Craig Dollansky took advantage of being moved to the pole after polesitter Jim Moughan jumped the original start in the third heat race. Jason Sides finished second to also advance to the dash. Here are the results:

(7:55 p.m.) Austen Wheatley led all 10 laps and Danny Lasoski finished second in the second heat race. Cody Darrah drove from fifth to third in the final two laps. Here are the results:

Bacon pulled to the infield on the second lap and Paulus went to the pits after the warm-up lap.

(7:33 p.m.) They are doing a little track work before the modifieds hot lap. Opening Ceremonies will follow before the sprint car heat races.

The top five from each advance to the feature and the top two to the dash.

There are 36 sprint cars. Each will get two qualifying laps, which determines the order of the four, 10-lap heat races. Those heats will be inverted by four and the top five will transfer to the 40-lap feature. Also, the top two in each heat plus the next two in qualifying who advance from the heat (but don’t finish in the top two) advance to an eight-lap dash. That lineup will be inverted by either four, six or eight based on a random draw.

The drivers who aren’t in the feature will compete in a 12-lap Last Chance Showdown, which transfers the top four to the feature.

(5:09 p.m.) It looks like we’re at 36 cars in the pits. There are some dark clouds in the area and green on the radar to the west and south, but only a 10 percent chance of rain the rest of the night (according to weather.com).

(4:27 p.m.) The drivers are doing the pill draw to determine the qualifying lineup.

(3:17 p.m.) It is fairly humid out here right now, but the bad weather is holding off. There are 23 sprint cars in the pits.

(2:35 p.m.) We’re at Farmer City Raceway for our only race in Illinois this season.

It is very gusty and there is a 30-50 percent chance of thunderstorms, but the sky looks great right now. It’s in the mid-70s and there are scarce clouds.

The drivers are starting to filter into the pits and I’d anticipate tonight could be a season high for a car count. Hot laps are scheduled for 6:30 p.m. with racing at 7 p.m.