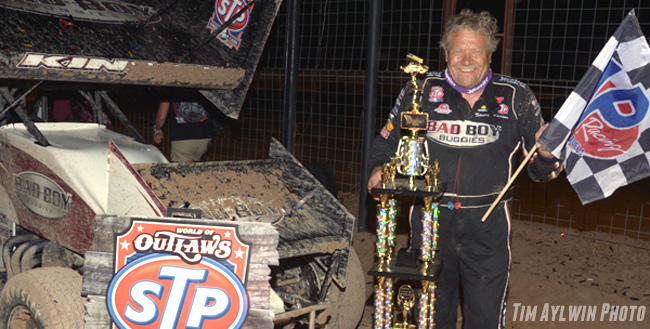 Tony Stewart Racing teammates Kinser and Donny Schatz owned the front row for the feature, and Kinser never looked back. Kinser, the only touring Outlaw with experience on the 3/8-mile oval, quickly charged to the lead and pulled away while a wild race for second took place behind him. Points-leader Daryn Pittman was able to hold off Craig Dollansky for his 11th top-five finish of the year.

“I was worried about everybody,” said Kinser, relieved to finally be in the win column for the 575th time in his World of Outlaws STP Sprint Car Series career. “The year hadn’t been going that great. It’s just good to get a win. We’ve been struggling to get a win and the whole team needed it.”

The general consensus among racers was that the track was solid and only getting better as the night progressed. “Still, you have to cowboy up,” said Gravel, “and you have to hit very precise marks.” That definitely benefitted Kinser, who has a knack for finding victory lane when the series debuts at a new venue.

To win, however, Kinser had to hold off a hard charge by Schatz who raced on Kinser’s bumper for half of the feature. Just after the halfway mark, however, Schatz pushed high in turn two and gave up second to Pittman.

“It was getting to be a pretty god race when Donny made that mistake down in one and two,” Pittman said. “The top four were pretty much all over each other.”

From that point on, the battle shifted to second and third between Pittman and Craig Dollansky.

“Hat’s off to my guys, we fought back,” Pittman added. “We thought we were having a motor going—it was just dying in the corner. This altitude we’re running at, it’s just not something we’ve done this year and it takes some getting used to … This is the first time we’ve have a streak like this but we are really enjoying it. We’re going to try to keep the top-five streak alive till November.”

This was Pittman’s eighth top-five in the past 12 races.

Dollansky finished third and Gravel held on for fourth.

“You can’t complain with top time and a new track record—and finishing in the top five. I just wish things had played our way a little different in the feature,” Gravel said. “I was just behind Daryn there, and I just didn’t get a good start on the restarts. And the car was never quite the same after that. If things had played a little differently, I would have been on the podium, but all in all it was a good night.”

The biggest drama of the night was added by Cody Darrah, who took a huge tumble in turn two. “I just got myself tight coming off four and then got crossed up going into one. It was my fault, but we have some strong cars and I don’t have any lasting effects from the crash,” Darrah said.

The real winners may well have been the fans, however. El Paso Speedway was packed. “This is normally a Friday night track and we’ve never had this many people in the stands on a Friday,” said track owner Royal Jones, who also raced and wound up finishing 14th. “Just look at all the guys in the pits. They are excited.”

TRACK RECORD – David Gravel drew first blood and scored a track record at El Paso Speedway Park. While that is not impressive by itself since this was a brand new track and the fastest qualifier was guaranteed to record that mark, what was remarkable was the fact that Gravel was the last driver of 21 cars to take time and the track had already lost some of its grip when he circled it. He posted a time of 13.453 seconds.

WE’RE ONLINE – Make sure to check out WoOsprint.com for the latest news and results, plus exclusive driver interviews, video and pictures. Also listen to every event live at DIRTVision.com .