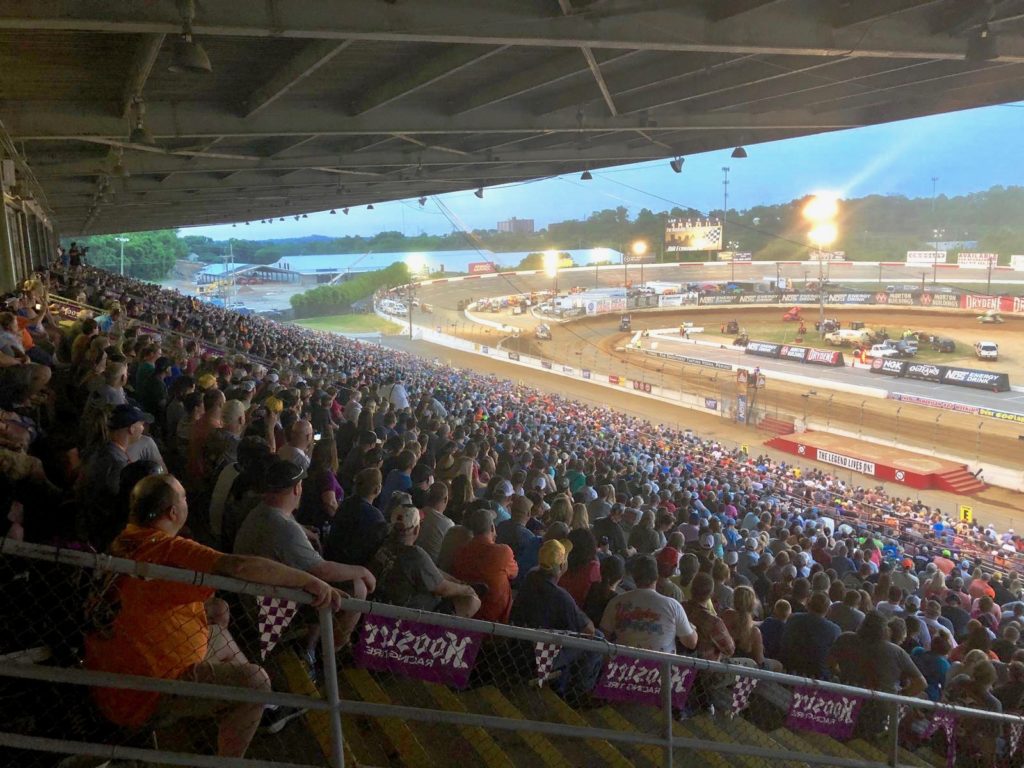 It has been sixty-two years since a cloud of dirt has billowed from the surface of the Nashville Fairgrounds Speedway, and last weekend saw it return when the World of Outlaws NOS Energy Drink Sprint Cars came to the historic track for the first time in their 41-year history. The highly anticipated two-night event showcased the best Sprint Car drivers in the country pitted against a very unique and technical track. In the end, the fans, the facility, and even Broadway Street in Downtown Nashville were the real winners.

After a solid year of planning, preparations for the event started in early May, when workers began constructing and reinforcing fences. A convoy of nearly 200 dump trucks then funneled in, dropping 7,000,000 pounds of dirt on the aging asphalt of the track’s quarter-mile oval.

Buzz surrounding the event began to build as soon as it was announced last November, when racers and fans alike applauded bringing the touring series to the Nashville track in the heart of America. The track has seen its ups and downs over the past decades after NASCAR moved the last of their major series races from the fairgrounds out to the modern 1½-mile tri-oval outside of town.

Despite some political games and encroaching development, the Fair Board and speedway promoters have been working feverishly to prove Nashville can and will support a major motorsports event. Following recent agreements between track operator Tony Formosa Jr. and Speedway Motorsports that led to the hugely successful Music City Outlaw Nationals, there’s little doubt Nashville wants racing to accompany its honky tonks with live music on Broadway.

And, of course, a race in Nashville wouldn’t be complete without some musical flavor at the event itself. Rock and Roll Hall of Famer John Oates was on hand to meet with drivers and fans before waving the green flag during the first night of competition. A lifelong motorsports fan, Oates was excited to see dirt racing come to the city.

“Being part of the first World of Outlaws sprint car race at Nashville Speedway really took me back to my childhood,” Oates said. “I grew up watching the midgets and sprint cars on dirt back in Pennsylvania, and to this day it is some of the most exciting motor racing in the world — action and hardcore competition all over the field. This is American oval track racing at its best!”

If people were needing proof Nashville would

show up to support a race at the fairgrounds, the proof could be seen in the stands. Thousands of seasoned fans mingled with those who were at their first dirt race, both drawn by the allure of 900 horsepower winged sprint cars attempting to harness their power and stay contained to the tight and tricky racing surface.

While fans bought t-shirts and souvenirs from the merchandise trailers parked outside, MRN’s Ray and Erin Evernham hosted a live broadcast of their popular show ‘Winged Nation’ under a tent on the midway. Fans were able to see World of Outlaws drivers such as Donny Schatz and Sheldon Haudenschild up close and personal as the duo interviewed them and talked about all things dirt racing.

The Redneck Riviera Party Deck was packed with partying fans, playing beer pong and corn hole on the backyard styled wooden structure. During lulls in the action the air was filled with the outlaw country sounds of Nashville’s Curb Records recording artist Tim Dugger, as the rising star played acoustic songs to the partying fans, bringing the festive atmosphere of Nash-Vegas out to the track.

After the show Dugger said, “I think the [event] shows that Nashville can and will support racing whether it’s dirt or asphalt. It was a step in the right direction for racing to return to the fairgrounds, and when promoted by the right people the fans will show up.”

The first night’s race proved to be a technical one, while drivers and crew chiefs struggled to master the quirks the recently constructed track threw at them. Won by 10-time World of Outlaws NOS Energy Drink Sprint Car Champion Donny Schatz, the Feature took a mere 13 minutes to complete as drivers avoided calamity, bringing out the caution flag only one time.

“It’s a pretty hyped up event, no doubt about it. There’s a lot of people here. We’re in an awesome market that we haven’t been in before. It’s great to win the inaugural race here,” said Schatz in victory lane after a celebratory air guitar session with the now iconic guitar trophy.

The second night of racing found the field dialed in. After a full day on the surface and time to game-plan the morning before, the competition was phenomenal on track. The Feature brought fierce battles throughout the field, while eventual race winner Shane Stewart picked his way through lapped cars to take the checkers and a paycheck of $25,000 home with him.

“None of us really knew what to expect coming into this place. Yesterday (Friday night) was a little bit of a mess, but I felt like the guys, the Outlaws, as a group, cleaned it up a lot today (Saturday),” Stewart said. “I know the track guys, we questioned everything that they did, but they did their best and made it two lanes. And honestly, Brent and I had a really good race for the lead. At the end of the day that’s all you can really ask for is a good race for the lead. I felt like Brent and I did that.”

As the fans filed out of the grandstands and into the pits after each race, the smiles on their faces told the story. World of Outlaws CEO Brian Carter could be seen amongst the crowd enjoying the event and quietly making mental notes on where it can be improved.

“It’s great to be welcomed into such an incredible market as Nashville with so much excitement and enthusiasm,” Carter said. “It wouldn’t have been possible without the support of our wonderful local partners and the Nashville community. It’s a great achievement to fill the house and entertain so many race fans with the Greatest Show on Dirt.”