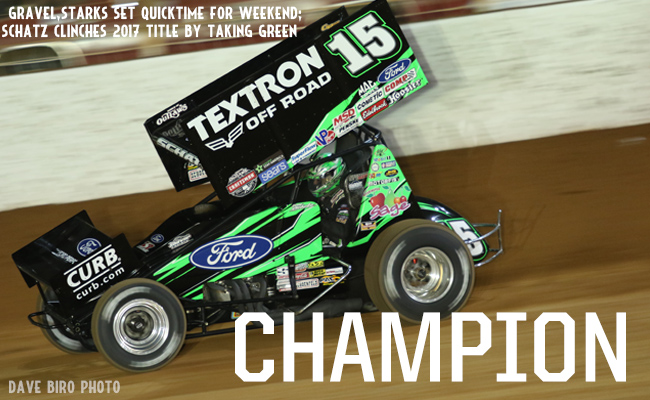 CHARLOTTE, NC – November 2, 2017 – David Gravel and Trey Starks topped Friday and Saturday Qualifying, respectively, but it was Donny Schatz stealing the show on the opening night of the Textron Off Road World of Outlaws World Finals at The Dirt Track at Charlotte Motor Speedway. Schatz clinched his ninth World of Outlaws Craftsman Sprint Car Series Championship by taking the Green Flag in Hot Laps.

In true The Dirt Track at Charlotte Motor Speedway fashion, the track surface held its condition throughout the evening. David Gravel set fast-time for Friday’s program with a lap of 12.530, over two hours and thousands of laps later, Trey Starks set fast-time for Saturday’s program with a lap of 12.606; a true accolade to The Dirt Track at Charlotte Motor Speedway track preparation crew. Additionally, Starks was the second to last car, out of the 52 sprint cars signed in, to take time for Saturday’s program.

“It’s really nice to see the track didn’t change with all the laps put on it. As a driver, especially when you don’t draw well, that’s all you can ask for. The track being equal for everyone is a big key when you have a big car count,” Starks, who was fourth quick in Friday’s program, said following his Saturday fast-time effort.

“Fast time is obviously how you want to start any night. Hopefully we can park this CJB Motorsports on the frontstretch a couple of times this weekend,” Gravel, who was also third quick in Saturday’s program, said.

Daryn Pittman had a strong evening, setting fast time in Flight B for Friday’s program as well as going second quick for Saturday’s program. 2018 IRA Champion, Bill Balog cashed in with a pair of third place Qualifying runs.

Additionally, Joey Saldana, Kerry Madsen and Paul McMahan all set themselves up nicely with front row Heat Race positions for both nights. McMahan is making his first starts of the season in the Tom Buch owned No.13.

As for Donny Schatz, all the North Dakota native needed to do was take the Green in hot laps to clinch his ninth Series Championship. Schatz did more than just that, securing second quick for both programs this weekend. Schatz will seek his 20th win of the season this weekend at the Textron Off Road World of Outlaws World Finals at The Dirt Track at Charlotte Motor Speedway.

Racing action for the World of Outlaws Craftsman Sprint Car Series begins at the Textron Off Road World of Outlaws World Finals tomorrow evening. You can catch all the action LIVE on DIRTVision.com; don’t miss a second of the action.