Gravel Looks for Three-Peat at Wilmot 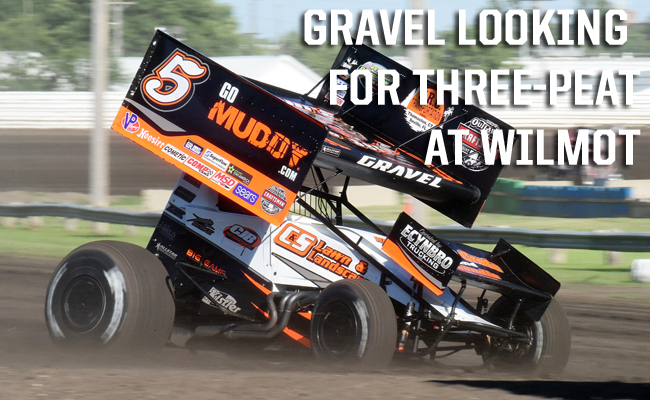 WILMOT, Wisc. — July 27, 2017 —When asked to pinpoint what has made him so successful at Wilmot Raceway with the World of Outlaws Craftsman Sprint Car Series, David Gravel can’t quite put his finger on one specific item. He has made two starts with the Outlaws at the 1/3-mile in Wisconsin and both times he has been victorious at the end of the 40-lapper.

Gravel returns to Wilmot Raceway this weekend on Saturday, July 29 for the running of the Badger 40 for the World of Outlaws Craftsman Sprint Car Series. The event will mark the fifth times the series has visited the track, with Gravel being the only repeat winner.

“It’s been two different cars and two different teams, but the same result,” said Gravel of his wins at Wilmot in 2014 and 2016. “I’m looking forward to going back there. It’s a very unique track with turns one and two being a lot different than turns three and four. For some reason, I have that track down pretty well. I think I’ve gained some fans in that area, so hopefully we can put on a good show for them and see if we can get three in a row.”

Since the last time that Gravel and his fellow World of Outlaws Craftsman Sprint Car Series competitors raced at Wilmot, some re-configuring was done to the track surface. Having veteran crew chief Barry Jackson in his corner, Gravel and the CJB Motorsports team will evaluate the surface on race day and compare notes from the past.

“When we get there, we’ll kind of check out what they did,” he noted. “I keep hearing that they wanted to add some banking to the track. For me, I kind of made the top work, even as flat as it was. I’m guessing the top will now probably be a little more dominant than it was before. In the past, the bottom was the fastest until that slicked off and then the top came in. Now, it will probably be that the top comes in and the bottom might come in later in the night. Hopefully it’s not too much different than last year and we can have the same result.”

Earlier this month, Gravel picked up his 10thwin of the season in the Brad Doty Classic at Attica Raceway Park in Ohio. For the 25-year-old, it marked a new career high with the World of Outlaws Craftsman Sprint Car Series. Gravel won nine races last year and reaching double digits was a big goal for the CJB Motorsports team this year.  The Connecticut native is already twice ahead of his pace from last year, as he had five wins entering the Badger 40 at Wilmot Raceway in 2016.

“It’s been a good year,” Gravel said. “Getting to that double digit win total was a big goal of ours. Now that we are there, we’ll keep chugging along. We have an important couple of months we are in the middle of, so hopefully we can carry some momentum through that entire time.”

The World of Outlaws Craftsman Sprint Car Series is in the midst of the traditional “Month of Money.” Gravel, who has a couple of high-dollar events remaining during this stretch, won the Don Martin Memorial Silver Cup at Lernerville Speedway last year. Remaining on the docket of marquee events this year is the $20,000-to-win Ironman 55 at Federated Auto Parts in Pevely, Mo., and the “granddaddy of them all” the $150,000-to-win 5-Hour Energy Knoxville Nationals at the famed Knoxville Raceway in Iowa in August.

“There is always added pressure, but I don’t think it gets to me too much,” he explained of the ‘Month of Money.’ “We look at the Kings Royal, Silver Cup, Summer Nationals and Ironman 55 as just another race. We are always up for the challenge when the big money is on the line. That’s when the driver has to step up and come through. That’s how your make yourself a great driver, you have to step up on the big stage.”

Gravel, who finished a career-best third in points last year, is in that same position this season, with around 35 race nights remaining this season. Along with his 10 wins, Gravel has 45 top-10 finishes, which is second-most in the series. He also has 29 top-five finishes, which is third-most, behind eight-time and defending series champion Donny Schatz, the current point leader and Brad Sweet, who sits second in points. Gravel is currently 42 points behind Sweet in the battle for second and 130 markers behind Schatz for the top spot.

“We’d like to duplicate what we’ve done so far,” said Gravel, of his outlook for the second half of the season. “We kind of started the season off a little rough, with a DNF (did not finish) the first race of the year. We struggled in Las Vegas a little bit, but ever since then, we have been very fast. Hopefully we can keep it up. If we can get close to that 20-win mark that would be pretty amazing. We’ll see what we can do and keep chugging along.”

Tickets for the Badger 40, featuring the World of Outlaws Craftsman Sprint Car Series at Wilmot Raceway in Wilmot, Wisconsin on Saturday, July 29 and can be purchased online atslspromotions.ticketforce.comor by calling SLS Promotions at 815-344-2023 and at the track on race day.