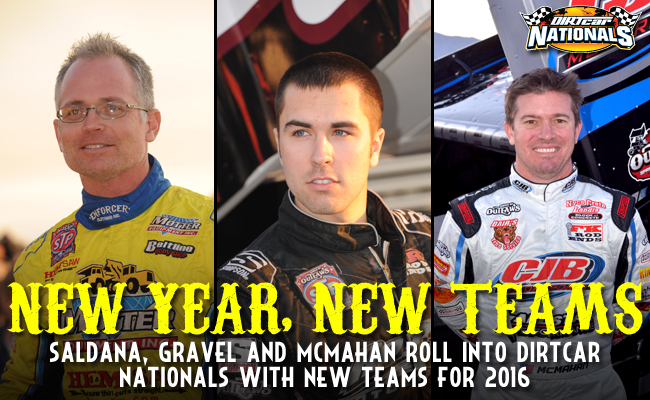 Drivers look to continue success with new teams in 2016

CONCORD, N.C. – Jan. 31, 2016 – As the 2016 World of Outlaws Sprint Car Series prepares to kick off the season, Joey Saldana, David Gravel and Paul McMahan will be traveling to the 45th Annual DIRTcar Nationals at Volusia Speedway Park in different haulers than they did last year.

Saldana makes the move to Roth Motorsports in 2016. He drove for the team during his rookie season in 1996, winning the Kevin Gobrecht Rookie of the Year Award and finishing 11th in the championship standings.

“Dennis and Teresa Roth came to me with this opportunity, which allows me to stay full-time in the World of Outlaws – which I love being a part of – and continue with a great engine program,” Saldana said. “I’ve used Rick Long’s engines for the last 10 years and everything builds around a great engine package.

“Roth Motorsports has a good nucleus. It’s a great team and engine package… Right now we’re putting in the time to be ready right out of the box in Florida. It’s hard to change teams, and especially crew chiefs, and come out of the box and beat Donny Schatz and [crew chief] Rick Warner.”

In preparation for the upcoming season, Saldana and his new team have been busy trying to develop chemistry while competing in the Winter Heat at Cocopah Speedway in Yuma, Ariz. Following action at Winter Heat, in which Saldana and Roth Motorsports finished sixth in the final points, Saldana shifted focus to the Chili Bowl Nationals in Tulsa, Okla.

“Normally we are in Australia or New Zealand in the off-season. But the last two years we had a chance to run the Chili Bowl. First year with Bryan Clauson’s midget, then this year we built our own which was a great experience,” said Saldana, who finished tenth. “My boys are at the age now where Christmas is a big deal, and I can’t miss that for racing in Australia.”

Another driver changing rides is David Gravel, who will be making the move to CJB Motorsports.

“I’m very excited about the opportunity,” Gravel said. “CJB Motorsports is a proven team and one of the best rides. I can’t wait to see what I can do and show off my talent.”

Gravel, who is no stranger to change, will move to his third team in two years after making the move from Roth Motorsports to Destiny Motorsports in April 2015.

“I have bounced around quite a bit over the last few years to several different teams. I am used to the change, but I want to find a permanent home and stay for a while, and I think I have the perfect team for that,” said the 2013 Kevin Gobrecht Rookie of the year. “The hardest part about changing teams is getting used to everyone. Getting used to the different cars, trailers and crew and also the different lingo between the driver and the crew chief.”

After being shut out of victory lane in 2015, Gravel most looks forward to getting back into victory lane and building consistency with his new team for the 2016 season.

The driver Gravel will be replacing at CJB Motorsports, Paul McMahan, finished the 2015 season seventh in points with three wins. McMahan will take over the ride vacated by David Gravel at Destiny Motorsports for the 2016 season.

McMahan said the timing worked out well for him at the end of 2015 as he was in search of a new home. The team came together for the first time during Winter Heat.

“I’m looking forward to just to getting back on track from where I was a couple of years ago,” McMahan said. “I know it’s going to take some time to get everything. I’ve worked with (Crew Chief) Scott Benic before many, many years ago and (team owner Rick Rogers’) has a good attitude.

“It’s tough to come out your first season – things like Daryn coming out and winning a championship doesn’t happen. You’ve got to build everything around you. You’ve got to build toward goals. Me being a little more of a veteran in this is going to help a lot. We can work through the issues we might have.”

McMahan said it also helps that the team already has a year under its belt running a full series schedule. The issues that a lot of teams encounter, like the strenuous schedule, will be less of a problem. He said things like effective communication will take some time to develop but that they are on their way.

“I expect us to win a handful of races, I expect us to finish in the top-five in points and finish toward the front every night. That’s where I’ve been the last several seasons,” McMahan said.

“We all know it’s going to be a little bit of a struggle at the beginning but if we can minimize that early, that’s all you can ask for.”

With the start of the season and the 45th Annual DIRTcar Nationals less than three weeks away, all three drivers have one thing on their mind – unseating 2015 DIRTcar Nationals Champion Daryn Pittman and claiming the ‘Big Gator’ for themselves and their new team.

Tickets for DIRTcar Nationals start at just $20 and are on sale now by calling 844-DIRT-TIX (347-8849), or by visiting http://www.DIRTcarNationals.com. Infield parking will be available on a first come, first served basis to all fans with a pit pass. The cost of the infield parking pass is $10 and will be available at the pit gate off of turn four.