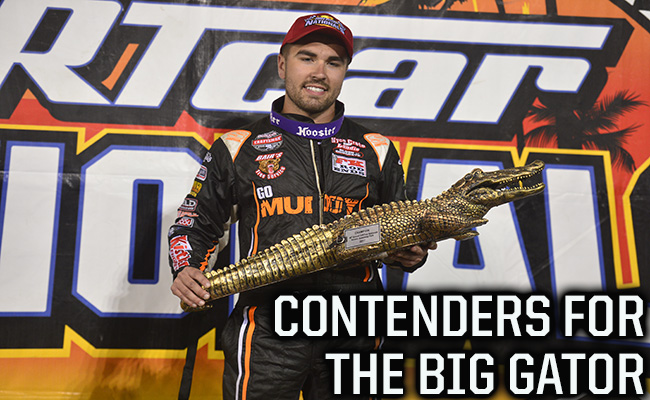 Eyes on the Prize; Contenders for the Big Gator

Entering 2018, the World of Outlaws Craftsman Sprint Car Series appears stronger than ever and is headlined once again by the Big 5. Donny Schatz, Brad Sweet, David Gravel, Daryn Pittman and Shane Stewart have separated themselves from the rest of competition as racing’s elite. The quintet has earned a combined 112 World of Outlaws wins in the past two years. Although it’s no guarantee these teams will enter All-Star competition, all five did so last year and are expected to compete and subsequently be frontrunners for the Big Gator.

Let’s take a closer look at the favorites for the DIRTcar Nationals Championship.

Donny Schatz – Winner of three of the five Features in 2017, including one from 17th position, anytime the word contender is brought up, Schatz is the favorite. The now nine-time Series Champion is the man to beat. Mediocre qualifying and heat race efforts prevented the Fargo, ND native from capturing the Big Gator in 2017, but expect Ricky Warner and the Tony Stewart Racing No.15 to be ready to go the moment the trailer unloads.

David Gravel – Despite battling motor woes throughout the week, the Watertown, CT driver scored the prestigious trophy piece in 2017 on the strength of consistency. The DIRTcar Nationals title jumpstarted Gravel’s career year, concluding with 18 Outlaw wins on the season. With no changes to the team, expect the CJB Motorsports No.5 to be in contention for the Big Gator and the Series Championship at season’s end.

Brad Sweet – The retirement of longtime KKR Crew Chief Kale Kahne provides some cause for concern a year after the Grass Valley, CA-native finished second in the Series points standings on the strength of 56 top-five finishes. Eric Prutzman is expected to turn the wrenches on the Kasey Kahne Racing No.49 in 2018, and the duo will look to hit the ground running at Volusia.

Shane Stewart – Rebranding to Kyle Larson Racing in 2018, the team returns with Lee Stauffer as crew chief and championship aspirations. Paul Silva is overseeing this team, and everything he has touched in dirt racing has ended up winning. Who knows, perhaps Stewart will have a teammate in Volusia?

Daryn Pittman – Three wins and 28 top-fives may not seem like an off year for many, but it certainly was for the 2013 Series Champion. A strong conclusion to 2017 has Pittman and company rejuvenated heading into the New Year. A new sponsor and paint scheme will be the perfect motivation for Pittman to get 2018 started off right.

Chad Kemenah – The now six-time Arctic Cat All Star Circuit of Champions (ASCoC) Champion headlines the Series once again and will be a model of consistency all week. The Hunter Racing No. 10H is one of the fastest cars in the country and will be ready to defend its All-Star title and represent the Series at Volusia.

New Kids on the Block:

Neither Ian Madsen, 32, nor Aaron Reutzel, 27, are exactly kids, but they will both be rookies for their respective Series. Madsen joins the World of Outlaws following a dominant season in the Midwest topped off with the 2017 Knoxville Raceway Championship, and Reutzel gives the All-Stars some much-needed firepower. Reutzel, the 2015 American Sprint Car Series (ASCS) National Champion, has shifted his focus to 410 racing in 2018, and with good reason. Reutzel was impressive on Sprint Car racing’s biggest stage — the Knoxville Nationals — coming from 19th to seventh in the 50-lap finale. Madsen and Reutzel will be looking to start their respective rookie seasons off in style at DIRTcar Nationals.

You never know who will show up at Volusia. Last year, Kyle Larson was able to compete once and thrilled the crowd coming from 15th to second. The other four nights Christopher Bell occupied the ride and had a strong weekend highlighted by a podium finish. Larson has hinted that he may be making an appearance at DIRTcar Nationals in 2018 once again. Kasey Kahne and Tony Stewart will both be in attendance throughout the weekend, but will they be behind the wheel? If any of our NASCAR friends compete, they are more than capable of stealing a race or two.

The wait is nearly over. It’s almost February, and it’s almost time for Florida. See how these storylines play out by getting your tickets today or follow along on social media on social media platforms at: (@WorldofOutlaws, @WoOLateModels, @DIRTcarNats).