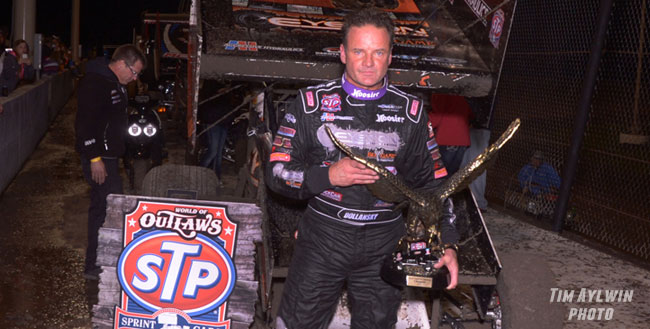 Dollansky fought off Paul McMahan’s relentless effort through heavy traffic in the 30-lap A-main to remain perfect in Outlaw competition at Salina, where he also won in 2011. Points leader Daryn Pittman was third with Sammy Swindell and Joey Saldana rounding out the top five.

The event was originally scheduled for Friday night but wet weather forced the race to run a day later, when cool temperatures equaled big horsepower as all but one of the competitors qualified under the previous track record.

“It’s a great racetrack, a beautiful facility,” said Dollansky, of Elk River, Minn. “I was up in the grandstands earlier today, it’s just nice all the way around. It was a fast racetrack tonight with the rain, it definitely made for a fast race. To start with we had to put ourselves in position to have a little luck on our side to get a good pill draw for the dash, but then you also have to capitalize on it. It was a great win for this entire race team.”

Dollansky’s Eyecon Trail Cameras car charged out to a quick lead in the A-main and was seemingly in traffic immediately on the high-banked 3/8-mile oval.

“I felt like we were losing some air in the right rear tire and I could feel myself getting tighter, especially behind cars, so I was trying to adjust our line a little bit and watch what we were doing behind lapped cars,” Dollansky said. “Some of those lapped cars we were able to get by pretty easy but we definitely got pretty tight behind some other ones.”

McMahan was trying to seize the lead in his CJB Motorsports machine, but while he could get up to Dollansky he was unable to carry enough momentum to surge past him. Still, it was a remarkable performance after the team was forced to change motors early in the night, putting them behind from the start.

“We started off the night real bad,” said McMahan, a California native who lives near Nashville. “We had to change motors after we broke a pin on the mag so we had to change motors and got no hot laps. We went out to qualify and ended up third quick, that made a good night for us. It put us in the dash and we were able to gain a couple of spots in the dash and start fourth in the feature. We got rolling pretty good, we got to third right on the start and got underneath Daryn when he got a little tight with a lapped car. We freed up a lot from the dash to the main event and I just kept trying to run the bottom as hard as I could. Craig was getting a little tight and kind of sliding up a little bit. I was getting close to him off of turn four a couple of times but I just didn’t have enough to get by.”

Lap after lap, Dollansky was nearly perfect in the A-main, weaving through traffic flawlessly and giving McMahan no chance to sneak into the lead.

“You’re trying to hit your marks on every lap and he was opening up the corner far enough where I could actually get underneath him a little bit on entrance to make the tight corner … but that was the only way I was going to get by him,” McMahan said. “There was no way I was going to be able to drive around him on the top.”

Pittman, who is from Oklahoma, started alongside Dollansky on the front row and tried to hold back McMahan while chasing down Dollansky, but wound up settling for third in the Great Clips car.

“If you got in at all too hot you get the air off you and get tight and push up,” said Pittman, who was raised near Tulsa and definitely drew the majority of cheers during driver introductions. “It felt like it would kill the motor and it seemed like it would take a lap for it to get wound up again. It felt like you were going to lose spots. As tough as it was to pass, you still had to be on it and hit your marks, make sure you kept clean air on the wing so the car did work as good as possible.”

So Dollansky remains perfect at Salina, having won the World of Outlaws STP Sprint Car Series only two races at the track. He also carries winning momentum into May, with the Outlaws set to invade Eldora Speedway Friday and Saturday (May 3-4).

NOTES – Cool conditions at Salina led to big horsepower as 21 of the 22 cars qualified quicker than the previous track record. Joey Saldana set quick time in qualifying for the second time this season. … Sammy Swindell, Steve Kinser and Craig Dollansky won heat races. … The dash draw was a 8 for the seventh time this season. … Craig Dollansky won the dash for the first time in 2013. … This was the second time the World of Outlaws STP Sprint Car Series competed at Salina Highbanks Speedway.

WE’RE ONLINE – Make sure to check out WoOsprint.com for the latest news and results, plus exclusive driver interviews, video and pictures. Also listen to every event live at DIRTVision.com.