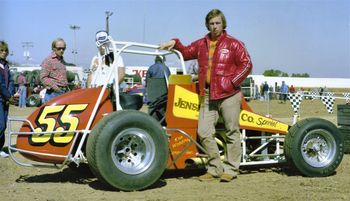 Northern California and Central Pennsylvania have always been where the World of Outlaws might be defeated. Last week’s Gold Cup Race of Champions by Colby Copeland nearly furthered a tradition that started in the very first Outlaw race won by Jimmy Boyd and Kenny Woodruff’s Sacramento Special right up to its 2019-20 champion Brad Sweet from Grass Valley, CA. To reward his oldest fans, Sweet brought the series back to Placerville Speedway after 23 years. But the champ lost his 2020 date to Covid and the 2021 edition to raging forest fires.

Tim Green’s face should also be on that wall. Hailing from the Sacramento suburb of Carmichael, he owns no fewer than 155 feature wins on 54 tracks in 17 American states and at least three Australian territories. He whipped the World of Outlaws, All Star Circuit of Champions and California Racing Association. Two titles at Knoxville Raceway paid for an apartment in Des Moines. He was King Of The West. He won from Quincy, California to Quincy, Michigan and from Mount Pleasant, Iowa to Mount Gambier, South Australia.

Woodruff was the man who first turned Green loose in Middle America in 1979, second season for the World of Outlaws. Tim had generated little notice in the heavy winged modifieds that slugged it out every Saturday in West Sac, but the raw talent was so obvious that when Woodruff and Boyd broke up at the Knoxville Nationals, Kenny came home to place third with Tim in the 1978 Jimmy Gordon Memorial bagged by Boyd and Ed Watson.

Woodruff was sold. He had a new driver for a new team based in his native Iowa. The car was the Jensen Construction 55. It was owned by a conglomerate that evolved into Serace and Vermeer, Inc. When the team became Knoxville regulars, it would be co-owned and wrenched by Ken’s son Jeff Woodruff. Dad wanted the first Jensen machine to come from Bob Trostle’s torch in West Des Moines, but Bob was late so Kenny sent Tim to Texas with the Ferrari family. When their new car was ready, Green was second at Shelby County and fastest in Marion County. Jensen did not enjoy victory until Fourth of July at North Star Speedway in North Minneapolis. The next four months were phenomenal: three straight wins at Knoxville including their Nationals prelim, Tim’s first Outlaw victory at Mid-Continent Nebraska and his Gold Cup prelim. He had never seen Manzanita Speedway before winning its 1979 Western World Championship at age 23.

Green and Woodruff went after The Outlaws in 1980, winning in Houston, Riverside, Lakeside, Knoxville, Granite City, and Grandview during Tim’s second Quaker State swing. Green won 11 of 111 from the first race at Volusia through Sedalia and Wapello County. Jensen finished fourth at the 1980 Knoxville Nationals and fourth in Outlaw points. Trostle took Tim to Phoenix, Tucson, Ascot, and Corona. Tim’s job with Jensen gained an Outlaw prelim in the Devil’s Bowl before ending in July of 1981.

Trostle hired Tim for eight wins in five states to seal Green’s first Knoxville crown. Tim capped the year by winning at Watsonville for Quentin Bammer. Trostle and Green grabbed 17 victories in 49 starts in 1982. Seven wins were NSCA events at Marshall, Mount Pleasant, Knox County, Eldon, Des Moines, Sedalia and Hartford, SD. They won at Oskaloosa, Odessa, twice at Tri-City, and four at Knoxville plus the track title. They were the 1982-83 scourge of Australia by winning ten times.

Green rejoined the World of Outlaws in 1984 Blazer Plumbing Stanton cars prepared by Daryl Saucier for Emory Wisenbaker of Houston, Texas. Green again nailed Volusia and Dallas straight out of the gate then beat The Outlaws at I-70. Ohio Speed Week turned special at Portsmouth where Green lost the lead to Steve Kinser, found a faster lane behind him, then slayed the dragon on the last lap. During the Dakota swing, Green flew home.

Tim and Ed Watson won the Cotton Classic, Baylands, Placerville and 1984 Gold Cup qualifier. They began 1985 by winning at Knoxville and twice at Chico before Tim hired on with Merrill Contracting of Springfield, IL. They too won at Knoxville, beat All Stars at Lawrenceburg, and topped two Sundays on Chuck Merrill’s hometown bullring. Since the first Maxim was four years away, Merrill used Gamblers. Fifth at I-70 was their Outlaw best. Chuck opened 1986 with Tim in Florida and Texas before Green bagged Baylands for Bob Miller and Calistoga for Don Snow. Green did not follow NARC to Calistoga until wings were allowed. Lee Osborne built a car for Sam Bailey that swept the 1986 Dirt Cup in Green’s capable hands.

It was the summer of 1986 when Tim Green began a partnership with Vergil Owen that endured for the 10-year duration of his career and still endures today. Vergil and Annie Owen’s first wins with Green came at Antioch and Knoxville. All Weld Machine of Milpitas opened 1987 by winning at Hanford and Baylands before a Sunday drive nearly turned tragic.

Tim Green’s career was 99 percent sprint cars. He never tried a champ car, took one midget to Ascot’s last dance. But on a whim, Green accepted Wally Pankratz and Clyde Prickett’s offer of a second supermodified, which made Madera asphalt a pleasant diversion until he backed into a wall and burst into flames. Six excruciating months followed before Tim raced again. Miraculously, he won immediately. Tim and Vergil were victorious seven times in 1988: twice at Baylands, twice at Chico, twice at Calistoga, and once in the Dirt Cup prelim.

When civil war split the national ranks in 1989, All Weld put Tim Green on the highway one last time. They finished first at Lernerville and Santa Maria and fourth in Outlaw points to match Tim’s highwater mark of 1980. Once he focused worldly experience on weekend warriors, Green amassed 35 NARC wins in three years, reigning as Golden State “King Of The West” in 1992. He swept the 1993 Dirt Cup worth $13k.

For the first time in two decades, Tim Green did not win in 1995. More and more Saturdays were spent guiding Tim and Marci’s son Nicholas through karts and quarter midgets. Vergil and Annie trained Tim to take over All Weld, which cited 2021 revenue of $6 million.