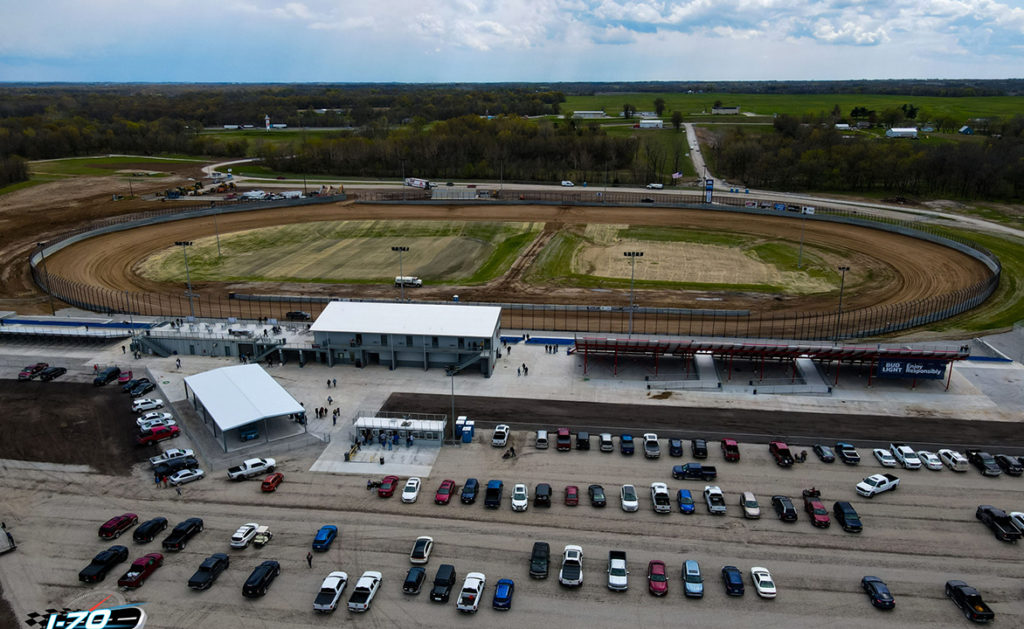 The World of Outlaws stamped it as “The World’s Fastest Dirt Track”. The rake was too steep to scale on foot. Water trucks would have toppled so the surface was sprayed from below. Chutes stood longer than a horseman’s half at 0.54 mile to enable heavy boots to carry corner speed greater than any marquee mat at Knoxville, Williams Grove, or even Eldora’s 0.44 bowl. The shock and awe of Bristol Motor Speedway in 2001 and 2021 was felt in 1981 at I-70 Motorsports Park in Odessa, MO.

Nine exits east of Arrowhead Stadium, home to Kansas City Chiefs football, sits the majestic I-70 Speedway that has weathered reconstruction like the interstate itself. Odessa offered asphalt for 12 years, coated in clay for seven summers then reverted to blacktop for 20 before this decade of inactivity. Outlaws should have reopened it in 2020 until COVID caused a 12-month delay. What’s one more year when K.C has waited 35 years for such a blessed event? Friday and Saturday will bring as many people as Lafayette County will permit.

I-70 enjoyed the same air of anticipation on Aug. 8, 1969 when drag racer Bill Roberts cut the ribbon on his new oval in Odessa. Jon Backlund bagged sprint car honors without roll cage protection. In one month’s time, legal action ended that lethal era. There was a tall cage above Dick Sutcliffe when the local giant averaged 106mph. Sutcliffe’s son Rick threw baseballs past so many people that ESPN pays him to tell how.

I-70 was longer and every bit as banked as the Indiana hills of Salem and Winchester where the United States Auto Club set records. USAC Sprint Cars appeared at I-70 six nights after the 1970 Indianapolis 500 that counted Gary Bettenhausen, Sammy Sessions and Greg Weld among 33. Sam set the Odessa mark at 111 before Gary’s four-cam Ford topped Todd Gibson in the feature. Heats revealed a near-fatal flaw. Odessa’s outer concrete was angled. Lee Kunzman climbed it like a ramp that left the park like a hanging curveball. Burns cost Kunzman a year of his career. The crash so frightened the promoter that six years passed before the next sprint race. USAC Sprints did not return (USAC Stocks fell to Butch Hartman) until 1978 pavement pounders included Bubby Jones, Roger Rager and Tim Richmond. Tom Bigelow bumped the standard to 115mph. Sheldon Kinser defeated dirt stars Billy Cassella and Ron Shuman.

Weld often added MARA Midgets to Sprint Car tickets, which enabled Nick Gojmeric to hire Wolfgang and Brad Doty to dominate. Some hobbyists were as terrified of I-70 as the Belleville (KS) High Banks but at least Odessa had chutes to catch a breath. Gene Gennetten was not fazed. Ayrton’s grandpa was the I-70 Sprint winner of 1975 who designed midgets from his Northwest K.C garage. Gene’s eight wins were twice as many I-70 Midget wins as Steve Knepper from St. Louis.

Weld tried everything. NCRA Late Models were beaten by Billy Moyer. NCRA Champ Cars saw orange Ofixco flyers of Jerry Stone and Tony Armstrong defeated by Bob Ewell from Texas. For the second one, Ofixco imported Ron Shuman to lead Stone in a 1-2 sweep. “The Flying Shoe” really flew around I-70. Following the 1984 Knoxville Nationals, Shuman spent two straight Sundays in victory lane then returned to pillage Odessa’s only CRA show. Weld tried weekly Friday Night Lights as well. Since most regulars also raced at Knoxville, Saturdays would have been promotional suicide. The 1983 Weld Memorial went to Wolfgang after Doug’s new mark of 118 MPH. The eternal standard was established by Sammy Swindell with a Wesmar Challenger that averaged 124 MPH before winning the 1986 Weld Memorial. The 1987 Weld Memorial won by Rocky Hodges (Shoff 23s) ended the era.

One of the fastest things to sail around I-70 was the 1989 American IndyCar Series. Winning at 122mph was Robby Unser, who had been 10th at the 1985 Weld Memorial with a Casey Luna Ford. AIS champ Buddy Lazier would win the 1996 Indianapolis 500 with Lee Kunzman as car chief.

ASA was back for the 1998 Odessa 300 won by Adam Petty over Jimmie Johnson. In the 2002 ASA 300, Kyle Busch finished fourth. But the most famous face to grace I-70 Motor Speedway was actor Paul Newman, who hot lapped in 1990 while he and wife Joanne Woodward filmed “Mr. & Mrs. Bridge” in K.C.

The longer that any track sits idle, less the likelihood of it ever again holding races. I-70 Motorsports Park is nothing short of a million-dollar miracle. Now before anyone salivates at the notion of Sam Hafertepe’s new track record at Bristol Motor Speedway surviving only five days, exhale at the fact that “New I-70” is smaller than the original thrill ride. Depending on tilt, it may resemble US 36 Raceway rather than “The Last Great Colosseum” in East Tennessee.

World Records are solitary pursuits. Side-by-side racing drives turnstiles. I-70 is encouraged to have Brian Brown involved. He brought the FVP Auto Parts banners. As a staunch supporter of Chiefs football and Royals baseball, Brian has broad ideas on integrating fans and competitors with corporate hospitality. He could sell a State Farm suite to Patrick Mahomes. This weekend will not be an accurate gauge because curiosity coupled with the World of Outlaws should spell box office gold. The true test will come after the novelty wanes and Outlaws wander away.