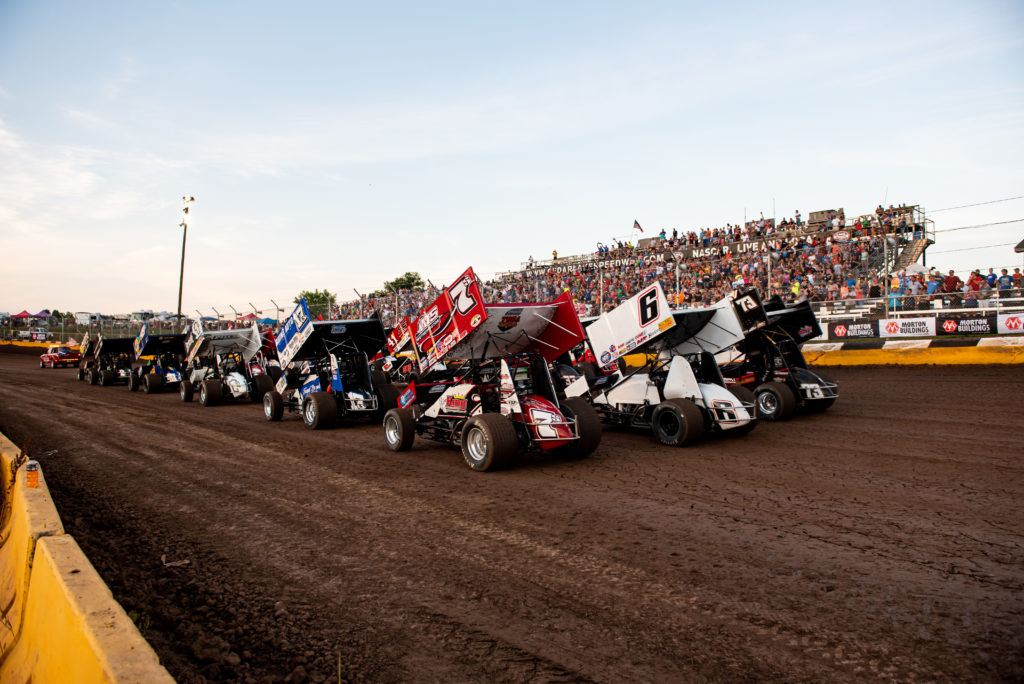 Cedar Lake Speedway staged the greatest race that I ever saw. It was one manic Monday conclusion to the World of Outlaws visit of 1988. To read headlines, Cedar Lake looked like another case of Steve Kinser stomping everyone in the dust, something he did 27 times that season. But it was so much more. The race had five different leaders in five consecutive laps and only five laps to go when “The King” imposed his will. Off the top of the final corner, Steve was three-abreast with Dave Blaney and Bobby Davis Jr. The winner was in doubt until the last few feet. Everyone exhaled.

This epic event was not the first at Cedar Lake by the World of Outlaws but it had to be the best. The place opened on the western edge of Wisconsin in 1957 separated from Minnesota by the St. Croix River. CLS is somewhere between Somerset and New Richmond. No town of Cedar Lake exists. Actually, that’s not true. There are two towns called Cedar Lake, Wisconsin but neither is within 70 miles of Cedar Lake.

Elmer Cook carved a gem: good and wide measuring 0.31 or a tick bigger than a third-mile. Outlaws stopped at Cedar Lake in 1983 and every year to follow with one 2006 National Sprint Tour exception. Cedar Lake was first seen by Ted Johnson as an I-94 exit between Fargo and Chicago. Yet the Cooks were so pleased with Ted’s first five appearances that they signed a two-night contract in 1988. Ted’s format for two-night programs in 1988 locked the first four finishers of the opening A-main (3k to win) into the first two rows of the second night’s A-main (8k to win) with the slowest qualifier of the four on pole, fastest in fourth, etc. One reason why Ted never did count preliminary features as full victories was because Karl Kinser regarded them as little more than opportunities to test tires. If he lost Three Grand to make 8k, that was a sound business decision.

CLS became the second series showcase to Minneapolis and St. Paul some 40 miles away. The area’s most famous Sprint racer was Jerry Richert of Forest Lake, MN. Four times he toured America as champion of the International Motor Car Association. When the World of Outlaws began, their first Twin Cities theater was North Starr Speedway in Blaine. Richert ran second to Kinser in that 1979 debut just before North Starr became an industrial park. Spectators agonized for three years until Cedar Lake filled the void. CLS became host of the Jerry Richert Memorial that turns 20 in 2021.

Cedar Lake is 633 miles and 10 hours from the Eldora Speedway that completed Ohio Speed Week when I was a semi-glorified hitchhiker. People were eager to help. Only one team was capable of bridging seven All Star nights with seven more in Wisconsin and Illinois. It belonged to Bobby Allen, who rode around Ohio in Rick Ungar’s air-conditioned Cadillac while the crew sweated up the truck. That crew consisted of Pat Hoff and Tim Kuhn. Pat was Jac Haudenschild’s brother-in-law in 1988 and a series technical inspector by 1991. Tim helped older brother Joe build Silver Spring winners before driving his own. Soon as Eldora ended, they pulled Dave Shultz steel to bolt in an aluminum cousin because engine rules were not yet standardized. Pat and Tim told me that I could ride along before they told the boss, who did not welcome nor object to my presence initially. Our journey was arduous. Chicago gridlock granted no air flow. I somehow drifted off to sleep until a VCR vibrated loose and landed squarely in the middle of my back.

“Scruffy” Allen was one of 19 competitors at Cedar Lake. Ten men maintained perfect series attendance that season: Blaney, Davis, Cris Eash, Haudenschild, Andy Hillenburg, Mark Kinser, Steve Kinser, Sammy Swindell, Doug Wolfgang and Greg Wooley. Others ran the bulk of 96 shows. Jeff Swindell started with Casey Luna, flew to California to drive for Ray and Jay Williams and brought their orange swirl to Denver after an $11,000 win at the Dirt Cup. In the Cedar Lake opener, Jeff turned them into Outlaw winners. Davis began his third year as car owner until he followed Jeff to Luna and Ken Woodruff. Jac started with Gary Runyon, paired with Les Kepler then talked Ted Lee out of El Paso one more time. Danny Smith nailed Nash Lumber until that Chicago effort dissolved after Knoxville Nationals. Johnny Herrera began in his family 45x, did two months in Ron Pack’s Four Aces, returned to Papa Joe, but finished the year for Smith’s Exxon of Phoenix, AZ.

Cedar Lake’s supporting cast also touted Tony Armstrong of Tulsa, OK. A graduate of NCRA 100-inch iron at the same time as Hillenburg, Armstrong chased the 1988 Outlaw trail from its Ascot inception through the April stop at I-55. When car owner Jim Klein returned to his Fresno truck stop, Tony rejoined the tour at Houston for Louis McAlpine. Sioux City’s Marty Johnson arrived at Cedar Lake after Knoxville’s Twin-16 show with Jerry Richert Jr. Rock Island’s Bruce Moore made the same trek. The Interstate (94) Racing Association was represented by Al Schlafer and John Tierney. Rounding out the field were Minnesota legends Bob Hop and Red Lempelius with Red wrenching ol’ Number 52 for son Spike. Armstrong and Lempelius played pivotal roles in elevating Cedar Lake to mythic status by causing the crash that changed the game.

Every red flag in 1988 was open, meaning any pit crew member could change tires, gears, shocks or driver underwear provided they did not delay the restart. Prior to Spike’s somersault, Sammy was setting a fine pace up high with “The Wolf” prowling low. During the pit stop, Daryl Saucier tightened Blaney to use the vacant center of the speedway. When the green flag returned, mayhem ensued. Jeff slid brother Sam, Mark Kinser passed them both, Davis and Steve arrived from rows seven and eight. Dave had the middle to himself and against a lesser opponent, Blaney would have won. But he left “The King” with just enough room upstairs. Davis finished third. Swindells fell to fourth and fifth with Jeff blaming a lapped Cris Eash.

I was not alone in assessing Cedar Lake as “The Greatest Show On Dirt” quite literally. New York’s Bob Watson served as series competition director and flagman for years on the DIRT Modified circuit. Watson raved. Kelly Pryor was Kepler’s crew chief. He kept one eye on Wolfgang as he sank from second to 10th and the other eye on the feeding frenzy. Decades later when Pryor was working for Rick Hendrick and bumped into me in a Florida saloon, Kelly confessed that he had still not seen a better race. In my own travels, only the 1994 Chili Bowl Midget Nationals or 2013 Trophy Cup at Tulare ever approached or exceeded Cedar Lake 1988.

The most somber reflection regarding July 11, 1988 is how close to the end of Brad Doty’s career Cedar Lake proved to be. Gary Stanton was another full-time Outlaw when he and Brad crossed the St. Croix. Wolfgang had quit Stanton for Kepler; Gary and Brad were a month into their reunion. They did two nights in Chicago, won a winged USAC race in Findlay and then suffered the Kings Royal wreck that paralyzed Doty’s legs and Stanton’s career as car owner. Gary retired to Kentucky to make Mopar engines for Karl Kinser and Keith Kunz among others. Doty remains the voice of Outlaw telecasts. Both of them know that Cedar Lake 1988 was something special.

The Grove: Checkered Past