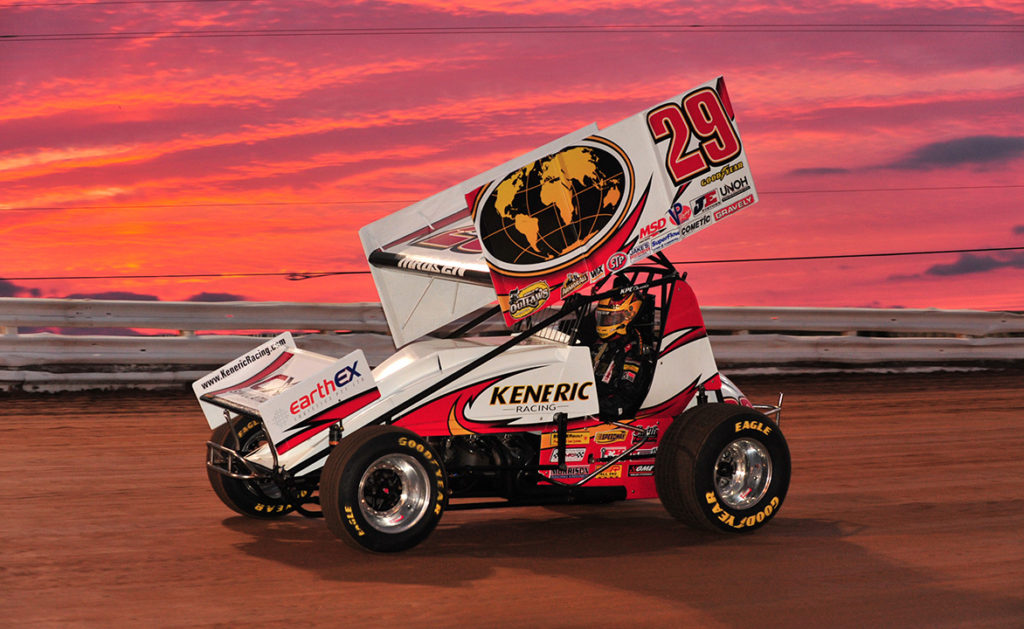 The day after Christmas is Boxing Day in Australia. It is a shopping festival not unlike Black Friday in America where “boxing” can mean fistfights over the last video game. Boxing Day is also the annual start of Australia’s Sprint Car Speedweek.

In a year free from a global pandemic, 10 Americans would be far from family on Christmas to commence seven straight races in Australia. Today’s plague reduced those folks to Brock Zearfoss, the kid from Pennsylvania who will try to be the top rookie in the 2021 World of Outlaws NOS Energy Drink Sprint Car season, right after he is quarantined.

Americans and Australians have been floating between continents for so long that Aussie accents are as common at Knoxville as a Tennessee twang on Mount Gambier. The first such entrants to the 1977-78 Knoxville Nationals were Steve Brazier and Garry Rush.

Aussies remained a Nationals novelty until 1985 when Trostle summoned Max Dumesny. In the summer when no one beat Doug Wolfgang’s Trostle machine, Dumesny performed that task (albeit a Race of States invite) in Trostle’s own silver streak. Trostle and Dumesny joined the Outlaws from Ascot to Baylands. Arizona’s Gil Suiter owned Dumesny’s ride in 1986 when their Challenger won at Manzanita and made the Nationals final. Dumesny and John Sidney, of Sydney, loaded cars and engines into a one-piece transport with the steering wheel on the right. Dumesny was fifth in Findlay and ninth at the 1988 Gold Cup. The 1990 Dirt Cup was America’s next look at Dumesny, who then headed for Iowa’s Bill Kain for wins at Knoxville, Peoria and Spoon River.

Dumesny’s design for 1991 was grand. He opened MD Motorsports in Iowa with future father-in-law Sid Moore. MD held a speed shop, a second car for Skip Jackson (first Aussie to be Knoxville champ) and a third for his fiance Melinda. Dumesny won at K-Ville, Peoria, Huset’s and Moberly. Jeff Woodruff and Jeff Rasmussen hired him to nail Columbus Junction and crack the 1992 Nationals final. They won at Webster City during a run at the 1993 Knox crown that went instead to Lasoski and Guy Forbrook. Al Hamilton got him to Williams Grove before Dumesny returned to the Jeffs and swept Sioux Falls. Max and Melinda settled in Sydney to raise Marcus, Mitchell and Michaela, all of whom raced Sprint Cars.

Australia’s most successful Outlaws have been Kerry Madsen and Brooke Tatnell, born 63 days apart in New South Wales. Their careers contain parallels such as Madsen marrying Tina from Iowa while Tatnell wed Amy of Minnesota. Both drivers toiled long and hard to gain full-time Outlaw prosperity yet persevered for a combined 38 series victories. The only other countrymen to win Outlaw races are James McFadden and Kerry’s kid brother Ian.

America’s first look at Kerry Madsen was Ohio Speed Week 1991 just before his Outlaw debut at Attica. He returned in ‘92 but made about 10 U.S appearances in ‘93-94. His first stateside success came in 1995 at rustic R&R Speedway near Zanesville, OH. Tatnell too was introduced to American audiences in 1991. Hewitt had talked Phil Poor into allowing George Tatnell’s kid into the Don Murphy IGA entry, which became Tatnell’s first Outlaw ride at Kokomo. Ken and Larry Cahill of Iowa City offered their Ford for the first of Tatnell’s 26 Knoxville Nationals.

Tatnell mirrored Dumesny by shipping his own transporter to Ohio Speed Week 1992, only to learn the rig was too tall for each train trestle. He shook All Stars for second at Atomic and was eighth against Kokomo Outlaws. His stateside seat in 1993 belonged to Melinda’s dad. Tatnell and Sid Moore did 16 races in six weeks that crossed eighth at Sharon Nationals. Cahill and Tatnell took second with IRA at Farley but missed the 1994 Nationals final by five cars. Prospects dwindled in 1995. However, Amy Shoup chose him for Speed Weeks in Ohio and PA when Fred Rahmer found a Mini Sprint that won for Tatnell at Grandview.

Tatnell’s ride for the 1995 Knoxville Nationals belonged to Greg Hodnett’s father, Hoyette, and sponsored by Roger Johnson of Kele & Associates. Roger remained by Tatnell’s side for three years. They kept an ASCS 360 that won in Memphis and West Memphis between 410 peaks of second at Haubstadt and third in the first Kele World Challenge. Tatnell took third against Belleville All Stars and third at the 1998 ASCS Nationals. Kele added an accomplished rookie to the World of Outlaws in 1999 when second at Cottage Grove and Top-12 at Nationals were Tatnell’s best.

Madsen struggled for a steady job. Australia’s Barry Lewis put Madsen in a car that earned the Aussie his first Knoxville victory but fizzled before the ‘98 Nationals. Parker Engines and Mike Proffitt provided Madsen the machine that won the 1999 Danny Young Memorial in Des Moines, but Parker parked early in 2000.

Tatnell’s 2000 campaign with the World of Outlaws would have been his second full pull had he not missed two months mending an Eldora injury. Iowa’s Lonnie Parsons became Tatnell’s car owner with funding from Casey’s General Stores. They reached seventh at Kentucky Lake, then third in Las Vegas until splitting ranks before Memorial Day 2001. Tulsa’s Courtney Grandstaff brought Tatnell to NCRA Speed Week to begin four vital summers. Trop Artic 66 whipped NCRA from Hollywood Hills to Salina, Wichita and Belleville plus three titles. Tatnell dusted All Stars in Joplin and Tulsa and achieved Court’s only Outlaw victory at Jetmore, KS. Closer to his chosen home, Tatnell teamed with Forbrook of Minnesota for IRA wins at Jackson, Superior and Sheboygan. It was Rush Racing of Washington that thrust Tatnell back into the World of Outlaws for two seasons, reaching sixth in 2006 points.

Madsen landed his first coast-to-coast gig with the 2006 Selma Shell team after they switched allegiance to the new National Sprint Tour. After it folded, he convinced Australian partners Geoff Kendrick and Bob Gavranich to create Keneric Racing on two continents. They made Madsen a member of nine consecutive Outlaw seasons, followed by four years with Tod Quiring’s Big Game Motorsports team to reinforce his rare level of commitment. Madsen’s new boss for his 2021 racing season, Michael Barshinger, will begin his 37th year of owning Sprint Cars, which displays a dogged determination admired by a hungry Aussie.

No fewer than 47 Australian drivers competed at the Knoxville Nationals between 1977 and 2019. Its number of crewmen is too high to measure. They are often revealed by the black socks purchased by their mum on Boxing Day.

You can watch Zearfoss and McFadden compete in Australia’s Sprint Car Speedweek live on DIRTVision.