CHECKERED PAST: Seven Nights in June 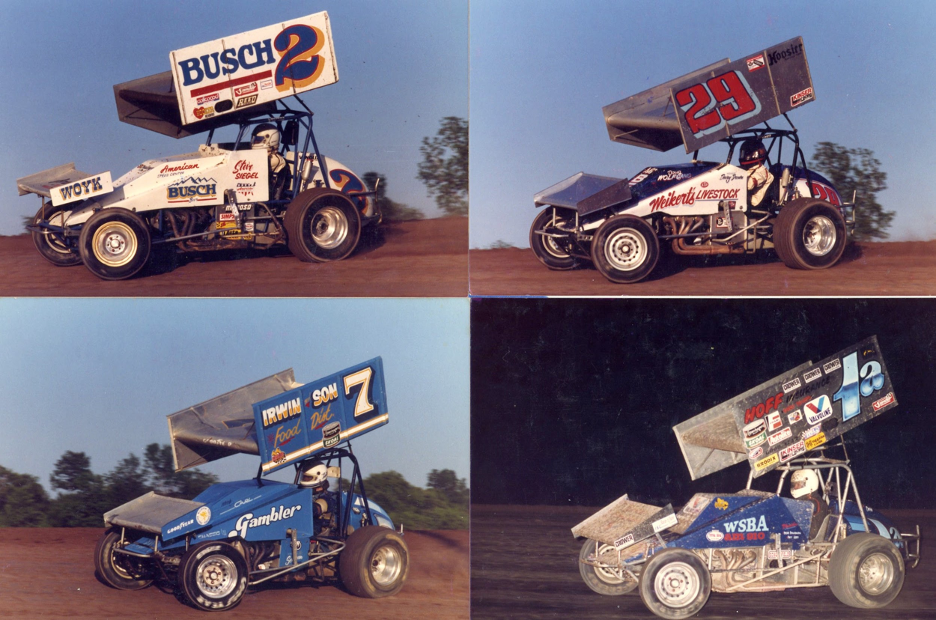 June 3, 1986 Weedsport, NY (0.337d) Race 30 of 82: It was rebranded as Cayuga County Speedway because “weedsport” sounded like boondocks. After wealthy Al Heinke sank several million dollars into the formerly fenceless oval one Thruway exit west of Syracuse, it bore scant resemblance to the Sunday Night anchor of Glenn Donnelly’s DIRT of New York. Donnelly paid so much money to 1973-76 modified stock car champion Will Cagle that Cagle opened a speed shop in the village.

Weedsport was the third and final stop on the 1986 Empire State swing that followed traditional Memorial Day festivities for the World of Outlaws at Lernerville, Williams Grove, Lincoln and Hagerstown, MD. Winner was Steve Kinser, the Babe Ruth of sprint car racing. Weedsport was however Kinser’s first victory in 15 races; a horrible slump by Steve’s standard. After two years of losing the horsepower edge to Davey Brown at Weikert Livestock, Karl Kinser helped Sam Jones design Dash-12 cylinder heads to change the game and lift Steve to 55 feature wins in 1987.

Second at Weedsport was Bobby Allen (1a) during one of the finest seasons of his unrivaled career. Seven of Scruffy’s 21 victories in 1986 were sanctioned by the World of Outlaws: 12k at Eldora, $8440 out of Williams Grove and $8200 from the Devil’s Bowl of Texas. Off the trail, Allen triumphed during Ohio All Star Speed Week at Sharon and Millstream (770 miles overnight from Eagle) and $7500 from his first Jackson (MN) Nationals. The proprietor of Shark Racing 2020 raced no less than 124 times in 1986, matching 21 wins with 21 quick times eight of which were new track records.

Third at Weedsport was Jeff Swindell, who spent the previous week maintaining Ken Woodruff’s car owner points after Williams Grove shrapnel opened Brad Doty’s face. To crew his own car, Jeff had hired Ron Shaver student Kelly Pryor then put a helmet on Pryor at Port Royal to keep their points from falling off. Doty healed quickly but neither Woodruff nor Swindell remained car owners much longer. K-Dub returned to NorCal to help Ed Watson and Darrell Hanestad. Doty stayed in Gambler’s house car but it now belonged to Pismo Beach developers Fred Marks and Les Kepler. They hired Pryor in 1987-88. Jeff Swindell replaced Robby Unser in the first Ford of Casey Luna, who brought Woodruff back to The Outlaws in 1987 and ensuing decade. Marks and Kepler crossed fourth at Weedsport with Jimmy Sills, who toured Australia before New York. Sills moved to Lenard McCarl and the Cahill brothers of Iowa City when Fred and Les swapped Bud Light Nine for Coors Light 18.

Fifth at Weedsport was Dave Blaney and Gary Stanton, who maintained perfect attendance through Sagebrush Swing then joined Allen at Ohio Speed Week and Jackson Nationals. When the World of Outlaws went to California, Stanton and Blaney blitzed All Stars at Lawrenceburg, IN. Sixth at Weedsport for Woodruff was Danny Smith, left standing at The Grove when John Leverenz took Gil Suiter’s car home to Arizona. Danny made deals with 20 different teams in 1986 though rain wrecked a couple commitments. Seventh at Weedsport was Don Kreitz Jr. six nights after his first Outlaw win at Port Royal and seven weeks before Donald shocked the world by capturing Kings Royal in only his second Eldora attempt. Kreitz parlayed that jackpot into a 1987 NASCAR effort that he aborted after a few months. Eighth after quick time (15.73) was Doug Wolfgang (29) in his second of three Weikert seasons and first year that Doug’s designs were fabricated by Ben Cook in Conyngham, PA.

The 1986 World of Outlaws visit to Weedsport was memorable for John Birosh because it presented his first sprint ride and only modified victory. Birosh became an ESS rookie in 1987 aboard steel tubing shaped by brother-in-law Lee Osborne. John soon distributed OzCars like those that nailed six straight titles for Mal Lane. He and Lee collaborated on a street rod for Jeff Gordon, an Osborne protege. Birosh followed Gordon to NASCAR as crew chief to John Andretti and Mike Stefanik, both deceased.

June 4, 1995 Middletown, NY (0.515d) Race 28 of 97: Ken Woodruff and Dave Blaney were $6010 Orange County Fair Speedway victors for the first time in the club’s 13th annual appearance. America consists of infinite shades of hard-packed earth yet only one black track proudly labels itself as The Hard Clay. During one prior visit to OCFS, Woodruff halted his tire groover to ask “Why?” No one grooves a tire for asphalt unless it rains. He sent his driver out on slicks and did just fine. OCFS Outlaws happen on Sundays after fat Saturday shows drain any moisture. One of Orange County’s best attributes is terraced drive-in viewing for spectators.

OCFS is old. It first raced horses in 1857 and introduced automobiles in 1913. Its first endurance occured in 1962 and the Eastern States 200 still caps each season. OCFS was titled Victory Speedway until 1967. Cagle was king until pushing north to school the savages and sell them parts. Middletown’s main man became Brett Hearn, who posted his 16th track championship for big blocks in 2019. He has another eight at 320/358ci. Hearn has raced sprints and modifieds on the same OCFS Outlaw card.

Second behind Blaney was the best OCFS finish ever by Jac Haudenschild (Jack Elden 22), an incorrigible cushion rider forced to behave. Third after fast time of 101 MPH was Stevie Smith (Dan Motter 71m) ahead of Andy Hillenburg, Jeff Swindell (Bob Kramer & Tom Wimmer 7tw), Danny Lasoski (Gil Sonner 47), Greg Hodnett (Kramer & Wimmer 8tw), Aaron Berryhill, Randy Hannagan and Lance Blevins. Three of those boys hailed from Oklahoma. Lasoski was like Sills by racing on the other side of the planet before he toured NY. Hannagan of San Jose was four months into his rookie season. Joe Gaerte lasted another month with Al Hamilton. Lasoski quit Gil to fill Hamilton’s vacancy.

June 13, 2000 Farmer City, IL (0.26d) Race 37 of 96: Dale Blaney’s first feature win with the World of Outlaws happened on one of the many quarter-miles in the Land of Lincoln. In one month, Dale’s second Outlaw win paid Fifty Grand from Eldora. Lou Blaney’s second son came to sprint cars slowly because he was busy playing basketball. Dale averaged 12 points per game at the University of West Virginia, was drafted by the 1986 Los Angeles Lakers, then had to tell Coach Pat Riley that Pat’s college selection was headed home to Sharon Speedway. Dale was a natural driver like all Blaneys. In three decades, his 137 All Star victories far surpassed even Kenny Jacobs, the Henry Aaron of All Stars. Blaney added ten Outlaw pelts to Farmer City and Eldora most recently at Lernerville’s 2015 Don Martin Memorial driving for George Fisher a year before George passed. He teaches young people to play better basketball.

Letting the crowd hear Blaney’s joy at joining a select fraternity was John Gibson, the Pittsburgh drummer who became The Voice of the World of Outlaws in 1997. Gib and Dale were practically neighbors. John watched Blaney’s first laps. They tease about football. Blaney likes Kansas City Chiefs while Gibson bleeds black and gold with Steeler Nation but lives for hockey. During one otherwise friendly game of golf, Dale said in no uncertain terms that if Gibson persisted in announcing Blaney as “The Tall Cool One” (stolen from a Robert Plant song) that physical pain was certain. “Low Rider it is,” Johnny replied.

Second behind Blaney at Farmer City was Steve Kinser chased by Joey Saldana and Sammy Swindell, who lowered the track record to 10.48. Stevie Smith, Tim Shaffer (Dave Helm 11h), Hillenburg, Blevins and Donny Schatz filled the Top Nine spots. Blaney’s first win marked the first of four annual visits before the series skipped Farmer City for eight years. It returned in 2012 but has not been back, shifting instead to the home of Friday Night sprint cars a hundred miles away in Jacksonville, IL.

June 14, 1981 Orrville, OH (0.365d) Race 47 of 102: Karl and Steve Kinser stared down the barrel of ten consecutive victories as never-tense Bobby Allen, Lee Osborne and Johnny Beaber absorbed as much wisdom as Wayne County’s turn four skull session did allow. Sprint car racing has seen some amazing win streaks. Schatz strung six together in 2014. Wolfgang won an astounding 17 straight in 1985 but whipped the World of Outlaws in none of them. No, the pinnacle of pure domination was this reign of terror. Kinsers were eastbound on I-70 when a truck stop quarter told them that rain had postponed Lernerville by a day. Did they drive on to Pittsburgh for a good night’s rest? No, they reversed course to spank All Stars at tiny Macon Speedway: first nine-second oval outdoors. The Posse had pounded The Outlaws pretty hard in 1980 but Kinsers showed Jack Gunn’s gang the same audacity that had crushed Middle America. Their trusty Stanton steamrolled Lernerville, Williams Grove, Lincoln, Rolling Wheels, Lebanon Valley, Weedsport, Penn National, The Grove a second time then Wayne County too. Standard pay was $2100 because All Stars had bumped to $2000.

When the World of Outlaws returned to Wayne County in 1984, victory lane resembled a rugby scrum because Steve Kinser tried to harm Sammy Swindell. One bouncer helping to separate enemy combatants was Joe Gibbs, football coach of the Washington Redskins and soon to immerse himself in motorsports more deeply than anyone not born Penske.

Beaber’s 1981 campaign collected 16 wins at Lernerville, Fremont, Franklin, Skyline, and an All Star show at Speedway 7. Second at East Bay would be Beaber’s best Outlaw finish if not for his win at Mercer Raceway Park as pilot of Kemenah Stanton. Second behind Beaber in that 1978 Western PA classic was Lou Blaney, who ran his final Outlaw race in Orrville on this evening. A month later, Dave Blaney boarded the Trevis sprint car so that dad could focus on winning better than half of his modified races over the next two decades.

June 17, 1978 Alger, WA (0.285d) Race 13 of 59: Doug Wolfgang (Bill Smith 4x) won the first of two Dirt Cups sanctioned by the World of Outlaws. Doug earned $3000 or one-third above standard. Ferkel (Al Daugherty 0) and Allen (Jim Barill & Jasper Petitte 1a) filled the podium. Bob had never previously raced in the Evergreen State while Rick ran the Dirt Cup in 1977 when it consisted of Skagit, Sky Valley and the Elma Fairgrounds that Fred Brownfield molded into Grays Harbor Raceway Park.

Sills would win six Dirt Cups. The Wolf wandered in from South Dakota to win another one for Iowa craftsman Bob Trostle in 1979. It took 15 years before Brownfield could convince Ted to bring his Outlaws back to the upper left corner of our country. Several stars did trickle in to win Dirt Cups between national gigs. Jeff Swindell scored in 1988; Tim Green grabbed three between ‘83-93; Hannagan hit two in ‘97-98; Kasey Kahne captured his state’s biggest prize in 2002-03; Brandon Wimmer in 2007; and Shane Stewart won in 2004 and 2010. It was 2015 when Skagit promoter Steve Beitler turned Dirt Cup into an ASCS 360 plum. Ex-Outlaw traveler Jason Solwold ate the first one then the next two went to Texas visitor Sam Hafertepe Jr. Next year’s Dirt Cup will be the 50th edition. 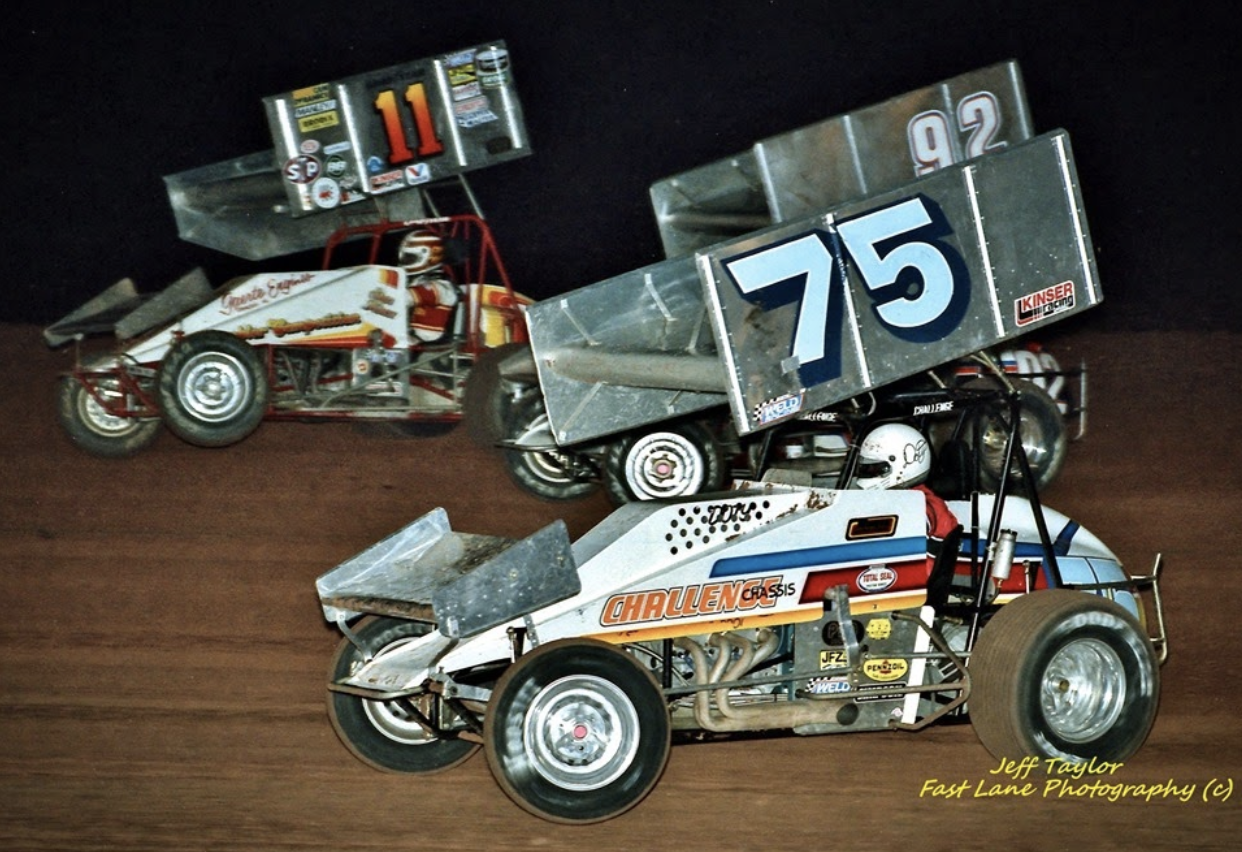 June 22, 1985 Lawton, OK (0.295d) Race 30 of 79: Sagebrush Swing was what the World of Outlaws called its sweltering week through Texas, Oklahoma and Kansas. It started without wings or sanction in ‘79 then joined the national tour for ten years. Lawton’s leg of the series lasted six summers.

Sammy’s sweep was the final time that Lawton Speedway ever appeared on the World of Outlaws agenda until 2020. Coronavirus killed that reunion date circled by soldiers of Fort Sill for Friday, May 1. Red clay is tricky but Lawton has some of the best. Perhaps it can be rescheduled because Sheldon Haudenschild deserves a crack at it.