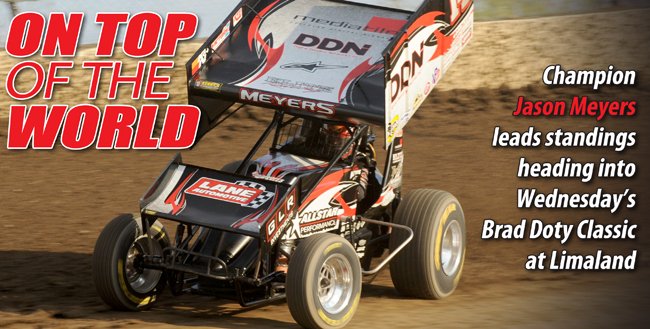 World of Outlaws Sprint Car Series at a Glance:

CONCORD, N.C. — July 11, 2011 —Jason Meyers and Joey Saldana emerged victorious as the World of Outlaws Sprint Car Series spent the weekend in Wisconsin. Cedar Lake Speedway proved to be the perfect night for Meyers, the 2010 Series Champion, to flex some muscle as he led all thirty-five laps of the night’s feature event. (Paul Arch photo)

Saldana set the tour on fire earlier in the year but cooled as the month of June kicked off. A trip to victory lane for the second year in a row could be the catalyst the #9 Kasey Kahne Racing team needed to get their season back on track.

As the Outlaws gear up for the legendary “Month of Money,” the series points standings is closer than ever with the top six running within 85 points of each other.

This week, the Outlaws are in Ohio as the 23rd Annual Ohio Logistics Brad Doty Classic presented by Racing Optics on Wednesday, July 13 and then it’s on Eldora Speedway for the famed Kings Royal weekend.

Tickets for the racing action at Limaland Motorsports Park  are available at www.Limaland.com or by calling the track office at 419-998-3168

Tickets for the racing action at Eldora Speedway are available at www.EldoraSpeedway.com or by calling the track office at (937) 338-3815.

Tickets for the World of Outlaws Sprint Car Series action for the event at Black Hills Speedway in Rapid City, S.D. can be purchased by going to www.SLSPromotions.com or by calling the track at 605-939-0266. This is an updated number from the original release about the added date.

Limaland Motorsport Park is a semi banked, one quarter mile oval. The track record of 10.763 seconds was established  Joey Saldana on July 15, 2009

Eldora Speedway is a high banked, half mile oval. The track record of 12.707 seconds was established by Craig Dollansky on April 13, 2002

Limaland Motorsports Park is a semi banked, quarter mile oval. So far in 2011, there have been four races on a track that size. The winners include: Sammy Swindell – 2 (Merced Speedway on April 1, Tri-State Speedway on April 30) Craig Dollansky – 1 (Silver Dollar Speedway on March 12); Donny Schatz – 1 (Princeton Speedway on June 25.)

Tune in: Listen live as the Voice of the Outlaws, Johnny Gibson, calls the action at all World of Outlaws Sprint Car Series events on the DIRT Radio Network, with a number of events throughout the season being featured on the DIRTVision Cybercast. Visit http://www.DIRTVision.com for more information on all the features, including updated results from each night of racing as well as a chat room to interact with other fans listening to the racing action. Also, be sure to check out the all new official Podcast of the World of Outlaws Sprint Car Series, Outlaws Unleashed, in the iTunes store or at http://www.WorldofOutlaws.com

Up next: Following this weekend, “The Greatest Show on Dirt” will head to eastern Pennsylvania to take on the Pennsylvania Posse at the Williams Grove Speedway in Mechanicsburg, Penn.

There have been 28 World of Outlaws Sprint Car Series A-Feature events this season.