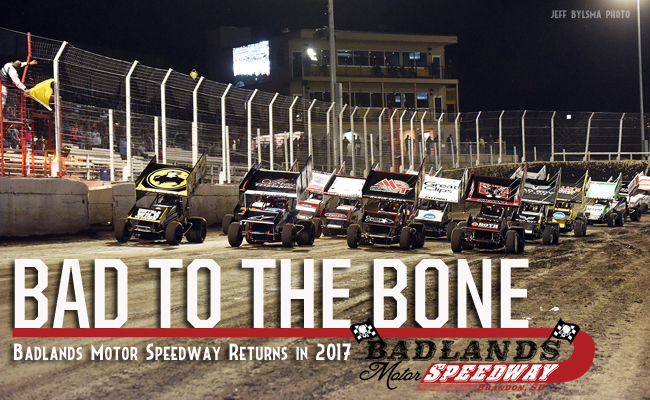 CONCORD, N.C. – February 8, 2017 – The World of Outlaws Craftsman® Sprint Car series will take flight July 1-2 for the Outlaw FanFest at Badlands (S.D.) Motor Speedway. Several of the nation’s best winged sprints will leave their tracks at the speedway for the series’ 30th year there, as the speedway confirmed Tuesday that the Outlaws will own two of the six nights of racing on its schedule so far.

Badlands has been a staple track on the tour since 1983. Since then, the Outlaws have raced there 41 times.  A dozen of those events were multi-day shows, and the Outlaws are set to add one more weekend show to the tally in 2017. This will be the series’ eighth consecutive year at the fast-action bullring.

Last season, series regulars Donny Schatz and Brad Sweet split the weekend, besting a 40-car field. After a wreck on opening night, Jason Johnson rebounded to take the quick time in the second qualifying flight in the finale. Another notable driver returning to the 3/8-mile oval is David Gravel, who scored his fifteenth straight Top-10 performance of the season in the closing night.

Fans will witness a fleet of 900-horsepower power plants shaking the ground beneath a nearly-packed grandstand. While the cars light up faces of all ages in the stands, this year’s event will also light up the night sky. The Outlaw FanFest will feature back-to-back nights of fireworks to celebrate the Fourth of July, a total fan experience for all who walk through the gates.