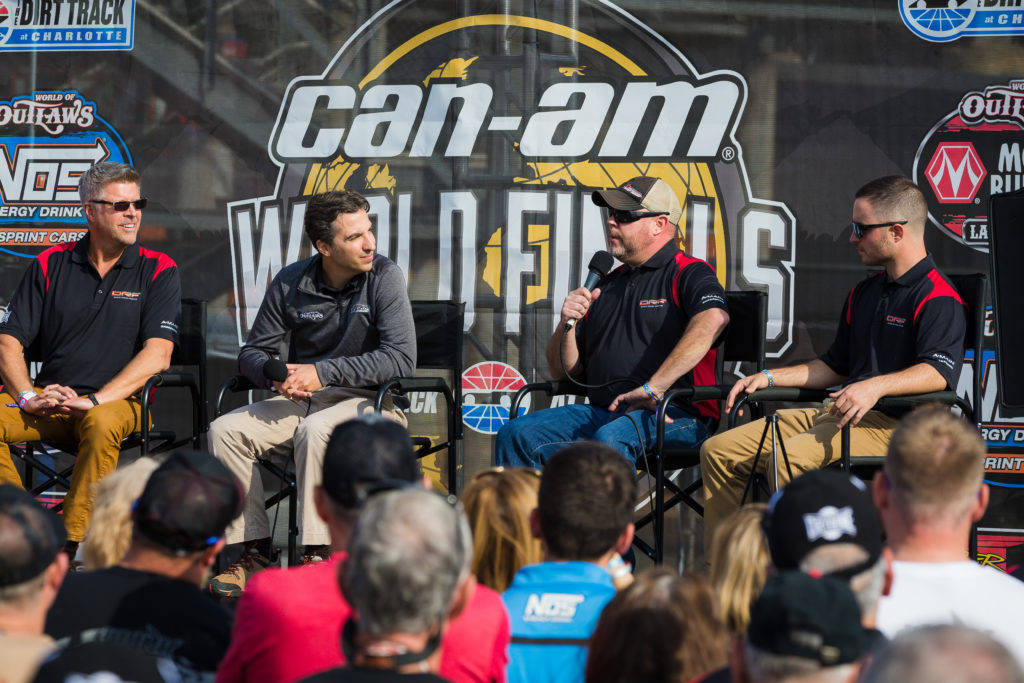 “There’s no better place for us to announce our launch of DRF than the World of Outlaws World Finals. We’re committed to the community of dirt racing,” said Dave Klinger, President of Drydene Performance Products. “Whether it’s our Team Drydene drivers, our sponsorship of DIRTVision, our status as Official Motor Oil and Official Diesel Exhaust Fluid (DEF) of the World of Outlaws, or just our general enthusiasm for this sport, Drydene continues to level up our support. Today, we announce a product made for passionate, competitive drivers across the country: DRF™.”

ENGINEERED FOR THE TRACK

As a proud sponsor of the World of Outlaws and teams Shark Racing (Sprint Series) and Brent Larson Motorsports (Late Model Series), Drydene listened to and worked with high-performing race teams to deliver a racing oil that reaches maximum performance levels on America’s toughest tracks.

“Dirt track ideals and performance drove our development of Drydene Racing Formulas,” said Klinger. “We know that the most competitive teams need their race oil to perform at the highest level in the toughest conditions, just like their drivers do. This season, Team Drydene took this racing oil to many victories. We’ve got a winning formula, and a winning team, and now it’s time for the racing community to get their hands on DRF™ and take their performance to the next level.”

DRF™ is specifically engineered for the oval track. It is available in two lines:

DRF™ Racing Oils are built on a foundation of superior base oils, robust friction modifiers, anti-wear agents, antioxidants and highly shear stable viscosity modifiers that have been proven on the track to optimize competition racing engines.

All DRF™ Racing and Break-In Oils are built with highly specialized surface-active chemistry to maximize each element’s effectiveness in bonding quickly and securely to camshafts, flat tappets, rollers, lifters, cylinder walls and other critical engine components.

“With DRF™, it looks good not only on the Dyno, but it’s proven on the track,” said Schuchart. “I see the results each lap. We’re running longer and faster, and we’re doing it with lower temps and improved horsepower. Using DRF™ has given me an edge all season long.”

“We started the 2019 World of Outlaws season with DRF and saw great results on the dyno immediately, with improved horsepower and torque over other oils we’ve used,” said Michael Newman, owner of Newman’s Racing Engines in Hanover, Pennsylvania, who builds all engines for Shark Racing. “But what makes me even more excited is DRF’s performance on our engines throughout the season: after 600, 800, and even 1,000 laps, our engines look great at teardown. From the crankshaft to lifters to the piston skirts, we’re seeing no signs of scoring, abrasion, oxidation, or pitting. This stuff is the real deal.”

Drydene is celebrating the launch of its DRF™ with promotions, contests, and more on social media (Facebook, Twitter, and Instagram: @TeamDrydene). For product details and purchasing information, visit DRFRacing.com or call 1.877.DRYDENE.

For over a century Drydene lubricants have been made in America and made to last, paving the way on our highways, in our fields and on the production line. And we’re still right here today doing what we do best; helping America Get the Job Done. Drydene products are built with ALL Technology®, Advanced Lubricity Life chemistry, to meet and exceed today’s modern automotive, heavy duty and industrial needs. Drydene offers a complete line of automotive, commercial and industrial lubricants, including engine oils, diesel exhaust fluid (DEF), transmission fluids, grease, and hydraulic & gear oils. For more information, visit www.drydene.com or follow us on Facebook: TeamDrydene, Twitter: @TeamDrydene and Instagram: TeamDrydene.

DRF™ was created by racers, for racers, as part of Team Drydene’s commitment to motorsports and competitive drivers. Available in both A-Main Racing Formula (Synthetic Blend and Full Synthetic) and Shakedown Break-In Oil, DRF™ has logged thousands of competitive laps across America. For product and ordering information, visit DRFRacing.com