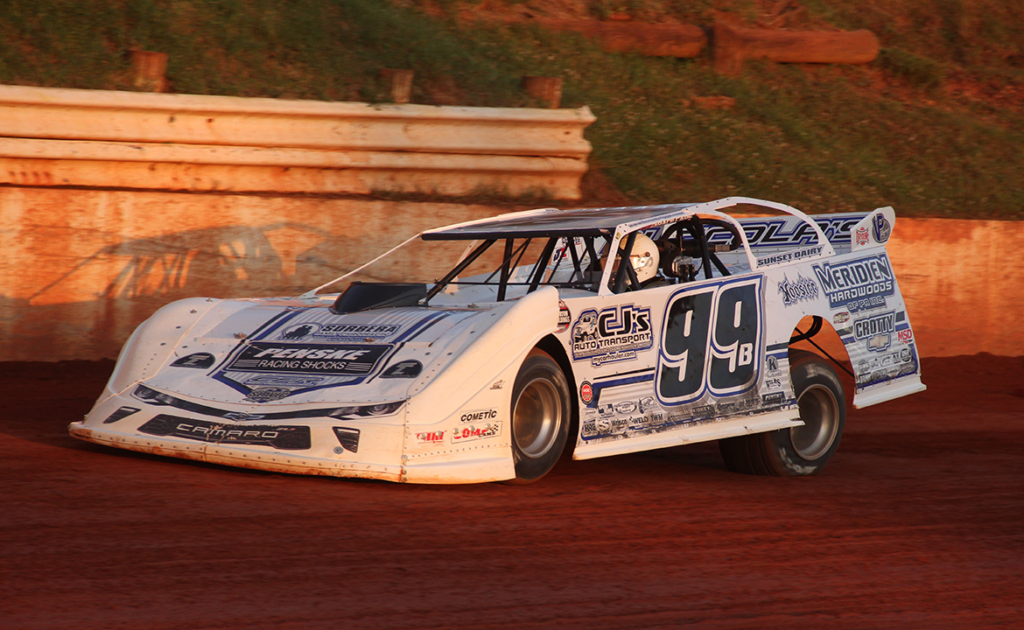 The World of Outlaws Morton Buildings Late Model Series is set to make its debut at the Red Cedar Raceway in Menomonie, Wisconsin, this Sunday, July 14. This will be the 177th different track the Series has visited across 33 states and 4 Canadian provinces since its inception in 1988 and rebirth in 2004.

The most recent track debut for the Outlaws came just this past Tuesday at ABC Raceway in Ashland, Wisconsin, where current points leader and 2017 Series Champion Brandon Sheppard led every lap in a rain-filled affair to win his fourth Morton Buildings Feature in-a-row and 12th of 2019.

Two other tracks have also hosted World of Outlaws debuts this season – the first at Cochran Motor Speedway in Cochran, Georgia, back on May 31, where Evans, Georgia-native Brandon Overton grabbed the lead just after halfway from Kansan Chase Junghans to pick up his second win with the World of Outlaws in 2019.

The very next night brought about another debut for the Outlaws, this time, at the Lancaster Motor Speedway in Lancaster, South Carolina. The Southeastern local favorites came out to play and brought their A-game throughout the entire race around the big half-mile but could not hold off the unwavering speed of Sheppard and the Rocket Chassis house car. He inherited the race lead on lap 21 from local standout Ben Watkins after he blew a tire to collect his then-eighth win of the year.

Sheppard currently sits out front of all drivers in the win column with a whopping 13 checkered flags in 21 starts. The New Berlin, Illinois-native has been on an incredible hot streak all year, now looking for his sixth consecutive victory after winning at Terre Haute Action Track, Independence Motor Speedway, Deer Creek Speedway, ABC Raceway and River Cities Speedway. Sheppard currently sits third in all-time World of Outlaws wins with 50, behind only Richards and three-time Series Champion Darrell Lanigan.

Lanigan has yet to score a victory with the World of Outlaws this season, despite his all-time second-best 72 career Morton buildings feature wins. However, he does boast an overall second-best 12 top-five finishes and sits runner-up in Series points. After a three-year stint as a driver for Clint Bowyer Racing aboard the iRacing #14, the Union, Kentucky-native is back behind the wheel of his signature black Club 29 Chassis for his first full-time season aboard the World of Outlaws since 2015.

Illinois Late Model Veteran Dennis Erb Jr. is sixth in points; Brent Larson and Rookie of the Year contender Cade Dillard of Robeline, Louisiana, are seventh and eighth, while Boom Briggs and Blake Spencer round out the top 10.

Veteran racer, MB Customs chassis-builder and eight-time winner with the World of Outlaws will surely be one to watch out for on Sunday, as the Menomonie-native has posted three-straight top-10 finishes, now heading into his backyard on Sunday.

Joining the Outlaws at the track on Sunday will be the WISSOTA Midwest Modifieds and Limited Late Models; Hot Laps are scheduled for a 5:45 p.m. start.

Tickets for the World of Outlaws Morton Buildings Late Model Series event at Red Cedar Speedway can be purchased at the track on race day, by visiting www.redcedarspeedway.com or by calling (715) 235-6318 any time before the event.

WHAT TO WATCH FOR: Grueling Upper Midwest stretch continues for World of Outlaws