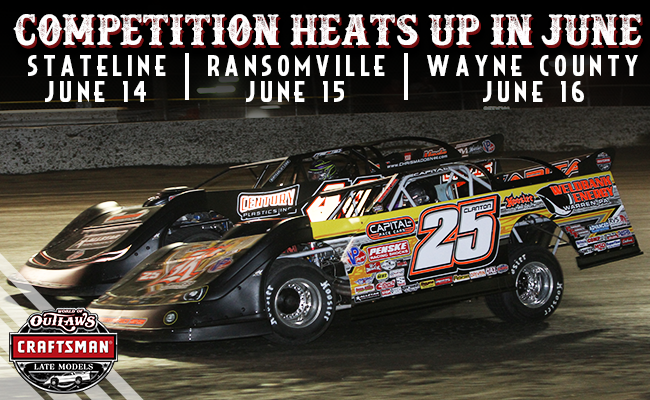 CONCORD, NC­– May 26, 2018– The World of Outlaws Craftsman® Late Model Series has completed 12 races so far this season, and by the end of June that number will nearly double. On the docket for next month are 10 races in six separate states, including Tennessee, New York, Ohio, Pennsylvania, Indiana and Missouri.

The most demanding stretch of racing in June will be mid-month with three stops at three separate tracks in two states: Stateline Speedway in Jamestown, NY on June 14; Ransomville Speedway in Ransomville, NY on June 15; and Wayne County Speedway in Orrville, OH on June 16. Full-time World of Outlaws drivers and their teams will travel almost 400 miles between the trio of dirt tracks to face regional competitors in New York and Ohio who dare stand nose-to-nose with the toughest bunch in Late Model racing.

Each event will consist of a complete show containing hot laps, qualifying, heat races, Last Chance Showdowns and a 50-lap, $10,000-to-win Sears Craftsman Feature. Tickets for Ransomville Speedway on June 15 and Wayne County Speedway on June 16 are on sale now! Tickets for Stateline Speedway will be available at the track’s ticket booth on June 14.

Shane Clanton is the most recent World of Outlaws winner at Stateline Speedway. The Georgia Bulldog marched to a $10,550 victory during the Series’ last visit to the third-mile dirt track in 2013. Clanton considers the northern territory to be somewhat of his second home.

“This is like racing at home for me now.” Said Clanton from Victory Lane in 2013. “We’ve picked up a lot of fans around here because we’ve spent so much time at Ron Davies’ shop the last few years. It’s like all of Ron’s fans have become my fans now too.”

Davies, Clanton’s father-in-law, is based out of Warren, PA, only 30 minutes from Jamestown, New York’s Stateline Speedway.

“The coolest thing about (winning at Stateline) is (Michelle’s) grandfather built it,” said Clanton after his victory. “She’s fond of her grandfather, misses him a lot, so for her to have a win here at a big race is pretty special.”

What made Clanton’s fourth victory of the 2013 season even more special was the fact that he collected the win on his wife Michelle’s birthday.

“She sent me a message this morning and said, ‘I need a W for my birthday.’ I got her one I guess,” said Clanton.

Clanton is still searching for his first win of the 2018 season, but remains one of the most consistent drivers on tour this season collecting five top-five and nine top-10 finishes of the 10-point races so far.

Only two drivers who entered into the World of Outlaws 2005 event at Ransomville remain full-time drivers on tour today: 2015 Series Champion Clanton, and 2011 Series Champion and the final member of the original Dirty Dozen Rick Eckert.

The veteran driver of York, PA’s last trip north to Ransomville Speedway was with the World of Outlaws in 2005. Eckert finished among the top 10. This season, Eckert is still on the hunt for his first Outlaws win. His best finish so far is fourth on Feb. 17 at Volusia Speedway Park during DIRTcar Nationals. His consistency in his new Rocket XR1 Paul Crowl Racing No. 7 places him fourth in the Series Point Standings and only 32 points behind a tie for third between Sheppard and Clanton.

The 2017 edition of the World of Outlaws at Wayne County Speedway was one of the most exciting races of the season as hot shoe Devin Moran rallied from a 19th starting position to battle with Brandon Sheppard for the lead before settling for second. The eventual 2017 Rookie of the Year gave his Ohio fans a show to remember.

Of the Series’ two visits to Ohio last season, Moran collected his first-ever Outlaws win at Atomic Speedway in Chillicothe, OH on May 26 before finishing second the following evening at Wayne County Speedway in Orrville, OH on May 27.

“As we travel all over the country, every region has different dirt, which makes the racing different,” said Moran of Dresden, OH. “I am definitely used to my Ohio dirt. The dirt helps me out as much as the track configuration. While both of these tracks have Ohio dirt, you have to treat them a lot differently. They have completely different configurations. Wayne County is a lot more flat and paperclip-ish, and you’re on and off the gas a lot more.”

The three-race mid-June stretch will help drivers build confidence and momentum towards the three-day 12th annual $30,000-to-win Firecracker 100 at Lernerville Speedway on June 21-22-23. Tickets for Firecracker 100 are on sale now!