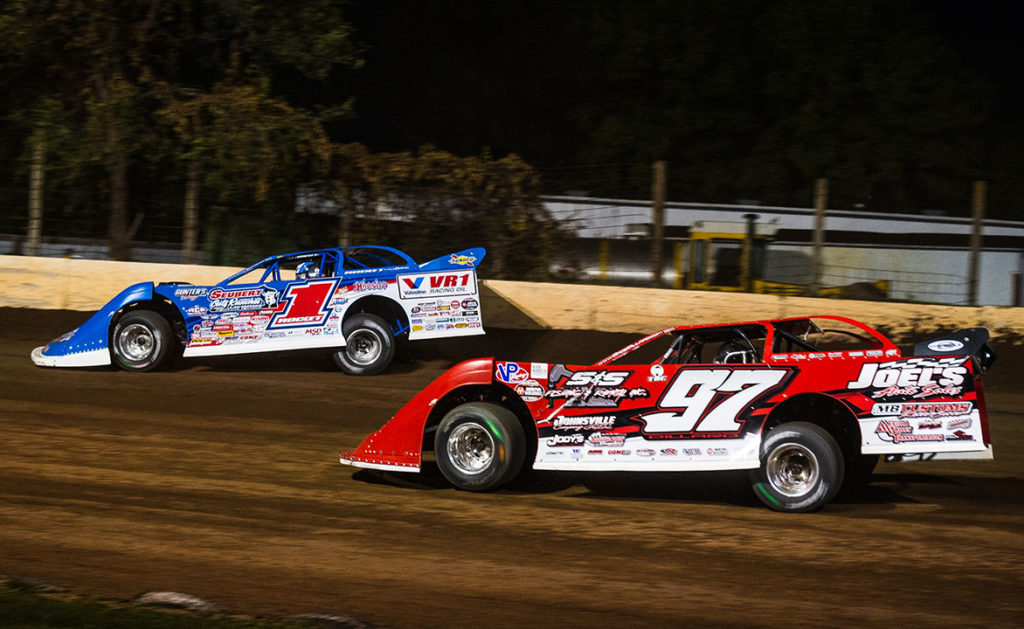 For the first time since 2007, the World of Outlaws CASE Construction Equipment Late Models make their return to Louisiana for a trip to The Rev.

One driver could end their trip to the bayou in style with a $30,000 payday if they sweep the weekend – and be the final driver in history to win a dirt race at the track as it will return to its original asphalt form after the weekend.

Several local divisions will join the World of Outlaws Late Models throughout the weekend. On Friday the CRUSA Late Models and the USRA Limited Modifieds join the event, while Saturday the 604 Crate Late Models and USRA Factory Stocks are on hand.

Here are some of the storylines to keep an eye on in Louisiana:

Top Dogs on The Hunt: Through six races, Chris Madden and Dennis Erb Jr. have emerged as early contenders for the 2022 World of Outlaws CASE Late Model championship.

Each driver scored a Series win at Volusia Speedway Park, and Madden leads the standings entering this weekend—38 points ahead of Erb.

Madden has also found success on 3/8-mile tracks in the past, winning at Mississippi Thunder Speedway last May.

Despite his drought at The World’s Fastest Half-mile, “The Rocket Shepp” enters the weekend with more wins than any other driver in 2022.

Sheppard has six victories this season so far, including two at Vado Speedway—a similar 3/8-mile track.

If Sheppard grabs a victory at The Rev, he’ll make history tying Josh Richards for most World of Outlaws wins all-time (78).

Hometown Thriller: Cade Dillard finally gets his chance to run a national touring series event in front of his home state fans.

“The Thriller” is a multi-time World of Outlaws Feature winner, including two wins last season at Outagamie Speedway and Boone Speedway.

He’s also found success on 3/8-mile tracks in the past, winning an event at Vado Speedway in 2020. Dillard had three top-fives and four top-10s on tracks that size in 2021.

Rookie Battle: The chase for Rookie of the Year has two contenders fighting tooth and nail after leaving the Sunshine State.

Both Max Blair and Tanner English have traded the top spot in the first six races. The Centerville, PA driver holds the lead entering the Pelican State—10 points ahead of English and 86 points ahead of Gordy Gundaker.

Hammer scored one top-five finish on the final night of DIRTcar Nationals and led 17 laps in a Feature earlier in the week before running into bad luck.

The Rev provides a level playing field for the rookie class, as none of the drivers have turned a lap at the Louisiana facility.

Man of Steel: Jonathan Davenport makes his return to World of Outlaws CASE Late Models competition this weekend at The Rev. If it’s anything like his last appearance, he’ll be the driver everyone is chasing.

“Superman” ended the 2021 Series campaign by sweeping both World Finals Features at The Dirt Track at Charlotte.

Davenport won three times with the World of Outlaws in 2021, including a $50,000 triumph at Cedar Lake Speedway’s USA Nationals. A win this weekend would give him 11 Series victories.

Smooth Return: Bobby Pierce will join Davenport on the list of drivers hoping to take home $30,000 at “The Rev” this weekend.

The “Smooth Operator” hasn’t been in action since January at the Wild West Shootout but, like Sheppard, had success at Vado Speedway.

Pierce didn’t finish outside the top-10 during the eight-race event and added three top-fives.

The Rev is a 3/8-mile Red Clay Oval
Online – https://www.therevdirt.com

Around the Turn: The Most Powerful Late Models on the Planet return to Cherokee Speedway in Gaffney, SC for the Rock Gault Memorial March 25-26. CLICK HERE for Tickets.