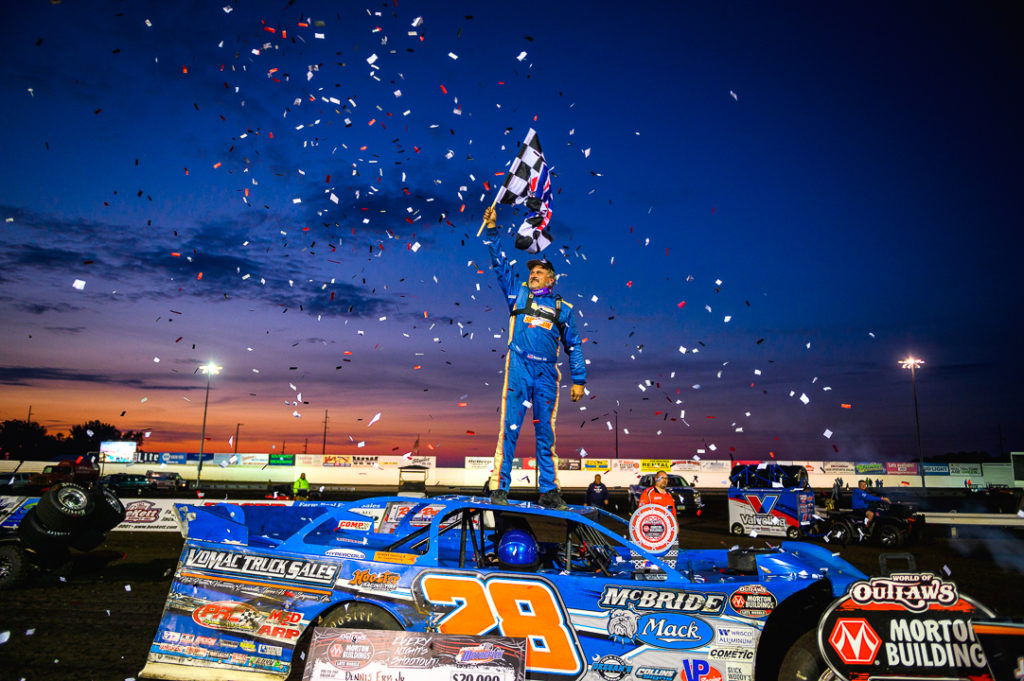 Dennis Erb Jr. isn’t someone who’s known for showing emotion. But you wouldn’t know it Saturday at Jackson Motorplex after he won his second Morton Buildings Feature of the season.

The Carpentersville, IL driver climbed to the roof of his car, throwing two fist pumps into the sky to celebrate his triumph.

But those joyful emotions quickly turned to tears in Victory Lane, as Erb was racing with a heavy heart.

“I lost my uncle a week ago there, and I lost my dog here this week that’s been going up and down the road going to all of these races with us,” Erb said. “It’s definitely a good win for us tonight.”

“The One-Man Band” dominated the first 40-laps of the race, but several late-race cautions kept the field close together.

Erb held off challenges from Frank Heckenast Jr. and Brandon Sheppard on a restart with three laps to go. Sheppard threw a slide job to take the lead away but couldn’t hold on as Erb dove to the bottom to wrestle the position away for good.

“I went into the corner on that last restart and hit a hole and it turned me a little bit,” Erb said. “I slid up the track but knew I had to keep my speed up because they were going to be up top too and it all worked out for us.”

Frank Heckenast Jr. backed up his win on Friday with a second on Saturday. The Frankfort, IL driver changed lanes after watching Brandon Sheppard pass a few cars in front of him. It gave Heckenast confidence to move to the top, and a chance to sweep the weekend.

“I told myself [Friday] before the Feature if you put yourself in contention, you’ll win some of them,” Heckenast said. “If we keep doing this, more wins will come.”

Sheppard was also in contention for the win but settled for third. The New Berlin, IL driver used the top side in the final 10 laps, picking off three cars on the outside before losing second to Heckenast.

“The Rocket Shepp” had to play a waiting game early in the race to make sure he would be a factor at the end.

“I just kind of bided my time as long as I could and took care of my tires as long and as good as I could,” Sheppard said. “I tried the top a few times earlier in the race and it just wasn’t ever any good. Finally, off of one of them restarts I just started hammering it up there and it came to life.”

Sheppard extended his points lead for the second straight night. He’s 64 points ahead of Chris Madden who finished fourth.

Even though this weekend was a wave of emotions for Dennis Erb Jr., more consistent runs may have him riding the top of that wave for the rest of the season.

UP NEXT: The Most Powerful Late Models on the Planet return to Wisconsin for its first mid-week race of the season Tuesday, July 13 at Gondik Law Speedway in Superior, WI.