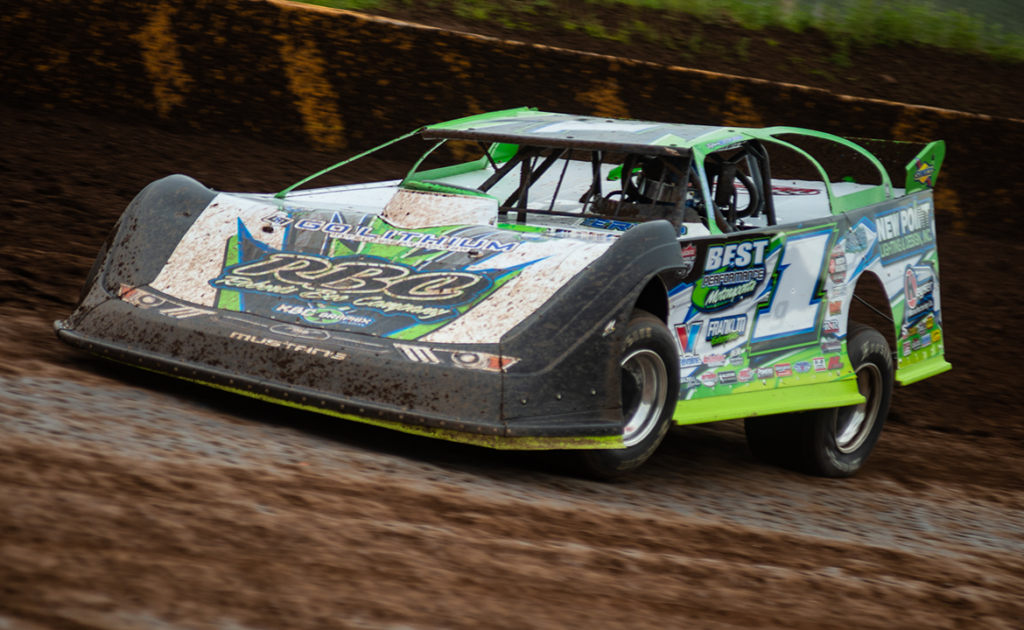 It’s been a slow start for Tyler Erb in 2019 World of Outlaws Morton Buildings Late Model Series crown jewel competition. After jumping ship to the Best Performance Motorsports team in the winter of 2018, the New Waverly, Texas-native grabbed his newfound racing home by the horns and clicked off a bunch of wins to get his 2019 campaign started. But after failing to qualify for the two previous World of Outlaws crown jewel events at Lernerville Speedway (Firecracker 100) and Fairbury Speedway (Prairie Dirt Classic), “Terbo” has secured the pole in this Saturday’s 100-lap, $50,000-to-win USA Nationals Feature.

Accumulating a total of 120.56 passing points across two rounds of Drydene Heat Races with finishes of third and first, Erb earned himself a spot in the redraw, where he pulled the pole for the ensuing eight-lap Dash event. From lap one, Erb seemed to be on rails, flying around the 3/8-mile and turning in the fastest lap of the race.

He took the checkered after leading each lap, going virtually unchallenged for the top spot. He and his new team are firing on all cylinders, and it really shows. On Saturday night, they’ll go for $50,000 against most of the best Dirt Late Model competition in the country, and knowing they’ll lead the field to the green will certainly allow Erb to sleep a little better the night before.

“Drawing the pole was a big part of it,” he said. “I don’t know what it looked like behind me, but to pass here, you’ve kind-of got to bonzai people. And it’s exciting to watch, but driving and being around it, you’re just kind-of on eggshells the whole time.”

It’s 100 laps in distance, and anything can happen in that time. But the big ‘polesitter’ target on Erb’s back certainly doesn’t have him worried.

“It’s nothing new, it’s another race. We race all of these same guys for $5,000 or $50,000. Sometimes, it’ll bring out the best or worst in people. But we’re going to race tomorrow just as we would any other night,” he said.

Rookie of the Year contender Cade Dillard seems to be shedding his ‘rookie’ stripes already, putting his Joel’s Auto Sales, MB Customs Race Cars #97 to Erb’s outside for Saturday’s big dance. Finishes of second and fourth in his Drydene Heats accumulated 109.04 passing points, good enough to earn him the final spot in the Dash.

Redrawing P2, Dillard kept up his momentum in the sprint race to ensure himself a front-row starting spot for Saturday’s main event as the highest-starting full-time World of Outlaws driver.

DIRTcar Summer Nationals regular and 2014 World of Outlaws Rookie of the Year Frank Heckenast Jr. had arguably the fastest car in the pit area on Friday night, setting a new event record for most passing points accumulated in two rounds of Drydene Heat racing and being the only driver on the roster to win both Heats he competed in.

The Frankfort, Illinois-native was riding a wave and showed no signs of falling off on Friday night. After a third-place draw and Dash finish, Heckenast will take his Rocket XR1 into tomorrow’s main event with a load of confidence and great feelings about his driving and his team that backs him.

All of that Summer Nationals experience he acquired in the last two seasons, racing a different track every single night, has really helped his skillset behind the wheel and his crew’s ability to make the right changes when necessary. The #99jr team cashed in on that this weekend, and Heckenast is grateful for every minute he spent on the road, learning the ins-and-outs of his new ride.

“You just learn so much about your car,” Heckenast said. “With this car being new this year, it’s just been unbelievable learning that much in 30 days. It really is a blessing to be able to go out and do that, as I know a lot of people can’t.”

Fellow Summer Nationals veteran and 2010 Champion Jason Feger claimed a guaranteed-starter spot in Saturday’s main event with his victory in the FANSFund Dash event over Chris Simpson, Ricky Weiss, Chris Ferguson and Brian Shirley. “The Highside Hustler” led all 12 laps and became a two-time winner of the event.

The Outlaws saddle up at Cedar Lake Speedway one final time in 2019 on Saturday night for the 100-lap, $50,000-to-win USA Nationals Feature event. Don’t miss a moment of the action, LIVE on DirtonDirt.com and DIRTVision with Hot Laps starting at 6:30 p.m. central!