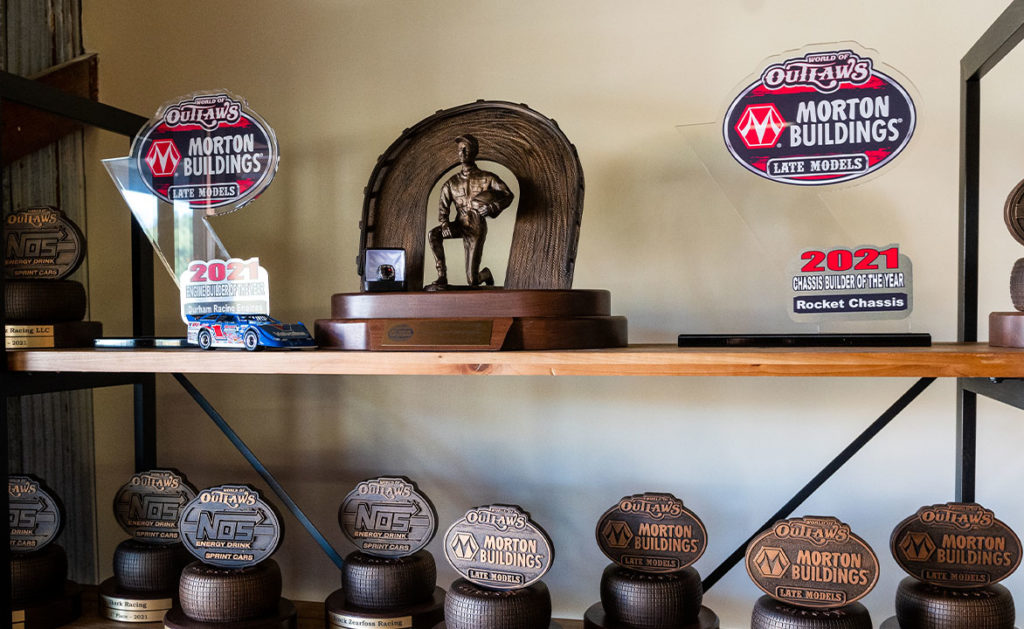 From January to November, the World of Outlaws Late Models competitors fought tooth and nail to earn their positions for the end of the season.

Those drivers were honored Sunday for their efforts at the year-end awards banquet.

Everyone had something to celebrate, from collecting a championship to having the best average pill draw.

Here’s who took home each award:

The Team Drydene Blood, Sweat, and Gears Award went to the driver with the most improved best average finish on the season. Brent Larson took home the award after upping his average finish from 18.2 to 16.2.

The VP Makin’ Power Award offered up a $500 bonus to the driver who received it. This year’s award went to “The One-Man Band” Dennis Erb Jr.

The Raye Vest Award winners go to drivers with the worst and best average Qualifying Pill Draw. Raye Vest was a long-time supporter of 2011 champion Rick Eckert, whose favorite part of the night was the draw. This year’s winners were Tyler Bruening had the lowest average, while Ryan Gustin had the highest.

The Engine Builder and Chassis Builder of the Year award went to the manufacturers behind Brandon Sheppard’s fourth Series championship. Steve Baker from Rocket Chassis accepted the prize for both Durham Engines and Rocket Chassis.

The 2021 Crew Chief of the Year award went to Heather Lyne, Crew Chief for Dennis Erb Jr. Lyne is one of the hardest working individuals in the pit area, and she’s the first woman ever to win this award. She was an integral part of Dennis Erb Jr.’s best season with the World of Outlaws, so far.

Here’s how the drivers finished in the standings:

8th– ($22,000)- Brent Larson from Lake Elmo, MN, had his best season in the World of Outlaws Late Models in 2021. His eighth-place finish in the standings comes on the strength of two top-five finishes, and his best career finish of second at Mississippi Thunder Speedway.

7th– ($23,000)- Boom Briggs is another driver who had his best career season with the World of Outlaws Late Models. The Bear Lake, PA standout grabbed three top-fives, and 11 top-10s this season, including a third at Davenport Speedway.

6th– ($24,000)- Ryan Gustin’s Rookie campaign had both success and heartbreak for the Marshalltown, IA driver. Gustin has nine top-fives and 21 top 10s along with being in contention for several wins. Bad luck sidelined the “Reaper” on more than one occasion, making it a tough climb during his Rookie campaign.

5th– ($30,000)- Ricky Weiss of Headingley, MB, Canada, can describe 2021 as a learning curve. Weiss debuted his new Sniper Chassis this season, and while he didn’t reach Victory Lane, he did make some strides throughout the year. Weiss finishes the season with seven top-fives and 25 top-10s.

3rd– ($40,000)- Tyler Bruening’s consistency was the catalyst for him to grab the 2021 Rookie of the Year Award for the World of Outlaws Late Models. While he didn’t reach Victory Lane, the Decorah, IA, driver scored 12 top-fives and 27 top-10s en route to a third-place finish in the season standings. Bruening also gets an additional $10,000 for winning Rookie of the Year.

2nd– ($60,000)- Chris Madden, from Gray Court, SC, had a consistent season behind the wheel of his Rocket Chassis in 2021. “Smokey” found Victory Lane four times throughout the season, including three-in-a-row at Mississippi Thunder and Port Royal Speedways. Madden finished with 27 top-fives and 40 top-10s—taking home more than $235,000 in earnings for his efforts.

1st– ($100,000)-For the fourth time in Series history, Brandon Sheppard is the World of Outlaws Late Models champion—tying him with Josh Richards for most all-time. It’s also Sheppard’s third consecutive title. The New Berlin, IL driver had eight wins in 2021, along with 34 top-fives and 43 top-10s. A large part of his success is the team chemistry between Sheppard, Danny White, Austin Hargrove, Joel Rogers, and Mark Richards. Sheppard’s title is also the eighth Championship for car-owner Mark Richards.