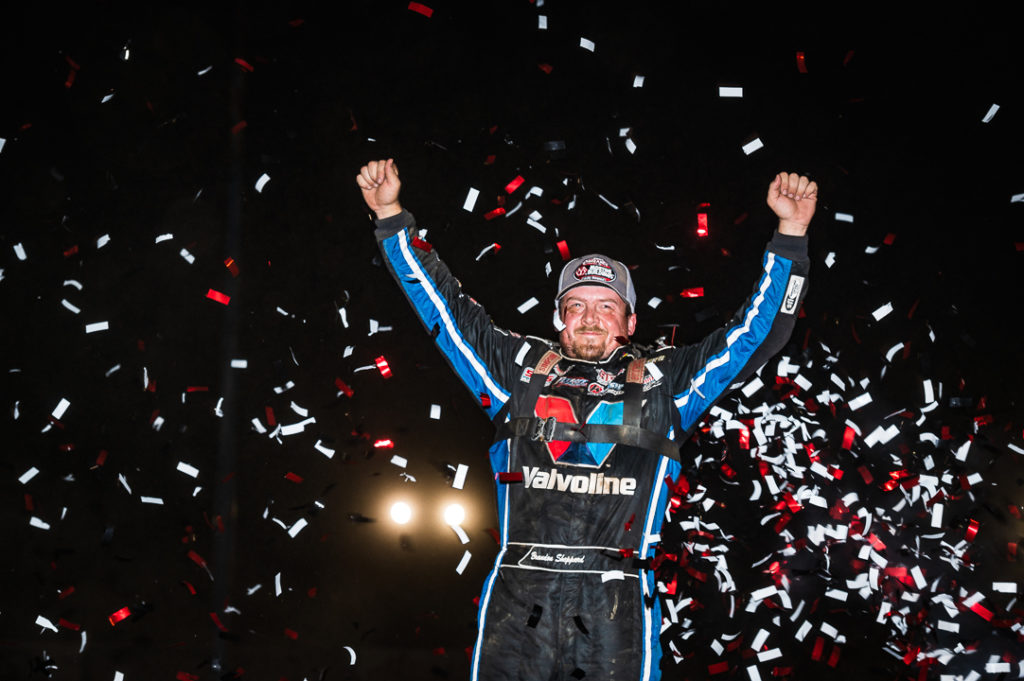 The New Berlin, IL driver is second on the all-time wins list with 75 World of Outlaws Victories

A timely decision by reigning Series champion Brandon Sheppard brought him one step closer to history.

The New Berlin, IL driver, was running second when a caution came out on Lap 2, giving him lane choice on the restart. Sheppard chose the outside, using his momentum to power around Dennis Erb Jr., and hold on for the win Sunday night at Eriez Speedway.

It’s the “Rocket Shepp’s” sixth win of the season and 75th World of Outlaws triumph of his career. He’s now in sole possession of second on the all-time wins list—three wins away from tying Josh Richards for the most all-time (78).

Sheppard knew his decision could be costly later in the race if he couldn’t wrestle the lead away from Dennis Erb Jr., who took the top spot on the initial green flag.

“I wasn’t that great at restarting on the bottom I didn’t feel like, and I thought [Erb] would restart on the bottom, so I knew I needed to choose the top,” Sheppard said. “I knew getting the lead early was going to be key later because the slicker the track got, the more tire wear would come into play.”

Several cautions in the second half of the race halted Sheppard’s chances of driving away from the field. Even though he wasn’t worried about his tires, the “Rocket Shepp” was nervous about how quickly his car came to life on restarts.

“It took me a few laps to really get a good rhythm going and get a good line going to get rolling there, so I really hated seeing them cautions,” Sheppard said. “I didn’t think I was taking off very good on the restarts, and it was definitely stressing me out, but we were able to pull it off.”

While Sheppard led most of the event, the hometown crowd locked their eyes on Eriez Speedway regular Dave Hess.

The Waterford, PA driver, who needed a provisional after an incident in his Drydene Heat Race, drove to second place after starting last.

It’s a finish Hess never expected, as he let the race come to him.

“The car was bad enough that we were real tempted just to load it,” Hess said. “The type of track it was when we got out there, I was just hoping to stay alive and get up through and get a top-10 out of it. Never did I believe we would get up to a podium finish.”

Hess used both lanes throughout the Feature, but a timely switch around halfway was key to his ascension through the field.

“I felt like I needed to get toward the bottom around mid-race, and then we started picking them off down there,” Hess said. “I think one more restart or maybe another 10 laps, and maybe we could’ve at least gave Sheppard some competition and made a race out of it.”

Chub Frank, a 16-time World of Outlaws Feature winner, crossed the line third. “Chubzilla” stated he had a good car but couldn’t keep pace with Sheppard because of tire wear.

“We burnt the left rear tire up on them restarts trying to get back to second,” Frank said. “Where [Sheppard] was running is probably where I was going to have to run, and I think Hess was the only one who probably had a shot at it because he saved his left rear tire.”

The Bear Lake, PA driver felt the number of cautions prevented him from having a better finish.

“Longer green flag runs were definitely better for us; I just couldn’t get enough heat in that right rear tire,” Briggs said. “I never could get to the top where I wanted to go, but I just made that bottom work and ran around for 25 laps, and it paid off in the end.”

On the first restart, Brandon Sheppard’s choice paid dividends on his quest toward World of Outlaws Morton Buildings Late Model history. The New Berlin, IL driver extended his points lead over Chris Madden to 158—shortening his path toward another Series Championship.

UP NEXT: The Most Powerful Late Models on the Planet travel to Davenport Speedway in Davenport, IA, Aug. 26-28 for the Quad Cities 150 presented by Hoker Trucking.