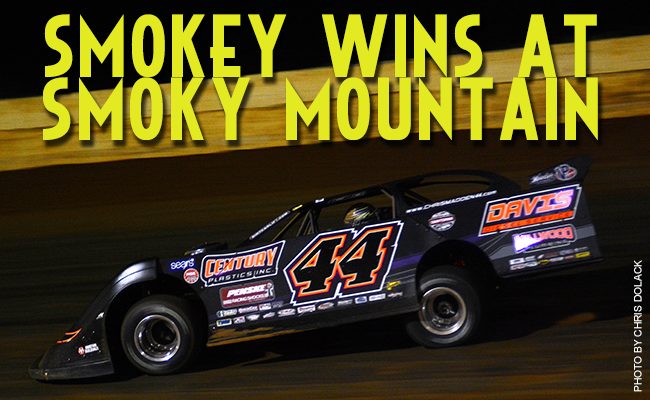 “We’ve had a great racecar all night ever since we unloaded,” said Madden in Victory Lane. “We were off just a little when we hot lapped, then we tuned up and man, we got this thing dialed right up where it needs to be.”

Madden has been on the brink of collecting his first win of the season every time he has hit the track. The Gray Court, SC driver has finished on the podium during all five races so far this season, including two second-place finishes at Volusia Speedway Park and a pair of third place, finishes last weekend at Whynot Motorsports Park. With the addition of this win, Madden now sits on top of the Series point standings.

“I told my guys if we just keep clicking off top two or three, you know, we could have run second both nights last week but we were going for the win and that’s what happens. It pays off in the long run and we got us a win tonight.I’d like to thank God for what he does for me and ask everyone to pray for Timothy [Culp]. I don’t know what happened to him but we don’t want to see nobody get hurt.”

The first caution of the race was on lap two when Culp slowed on the backstretch. He was hit with some debris from the track causing him to be sidelined for the rest of the evening. The 2018 rookie of the year contender was cleared by the medical staff in the ambulance at the track and states that he’s doing OK.

There was a total of three cautions during the 50-lap event. The second caution was on lap three as the defending Series Champion Brandon Sheppard slowed due to mechanical issues between turns one and two. He was running fourth at the time but was forced to retire from the race. The third caution occurred on lap 33 for debris on the track.

Although there were three separate cautions which regrouped the field, Madden was never seriously challenged for the lead. At the half-way point, he had created more than five seconds between him and the rest of the field.

The 2015 World of Outlaws Champion Shane Clanton finished second. The Georgia Bulldog commandeered the position from 2017 Rookie of the Year, and pole-sitter of the race, Devin Moran on lap 19.

“Maybe we can make our car a little better and steal some secrets from [Madden] or something,” said Clanton. “Right now, he’s pretty tough. He should have won last week because he had the best car at the end of the race but we just snuck by him (for second) and we almost won last week. Overall, a good car. This capital car is pretty good right now so hopefully we can just maintain what we’re doing and just keep running one [or] two.”

Clanton is currently fourth in the point standings with his best finishes being at the Series’ last two races where he has finished second.

Moran collected his first top-five finish of the season on Friday at Smoky Mountain Speedway.

“Obviously, we wanted to go out there and win but Chris and Barry [Wright] and them guys did a great job. They were a rocket ship tonight. Shane got by us for second but we were trying to hold him off. After the start of the season, it feels like a win for us. Man, we have been struggling with the Outlaws. To get a run like this to get us back up there in the points a little bit. We’ll just try to put it together a little better and try again tomorrow night.”