GO-PHER BROKE: Sheppard Holds off A Hounding Weiss to Win His First at Deer Creek 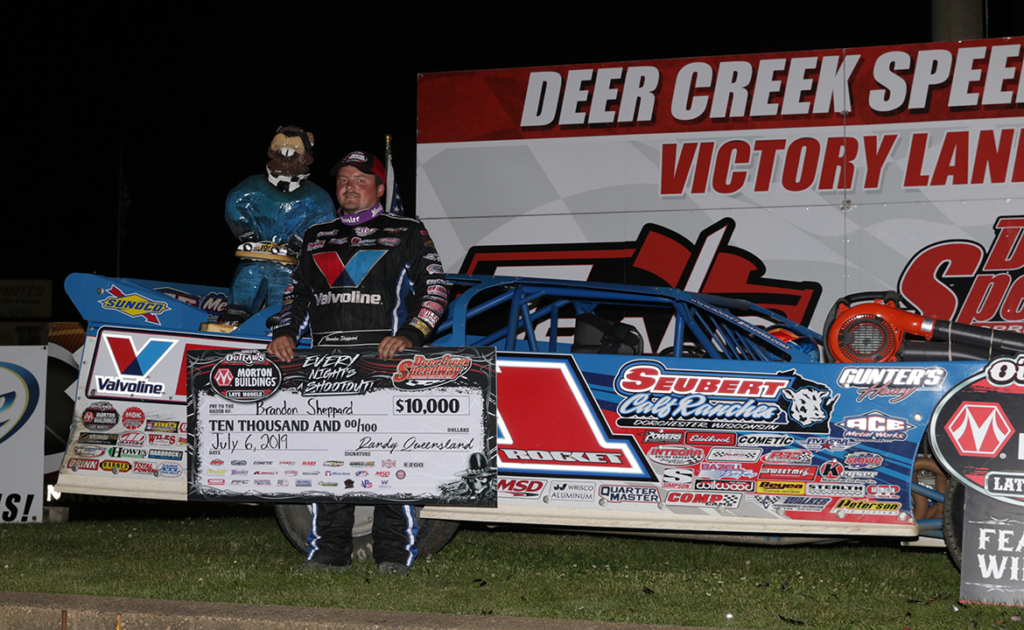 On Saturday night at Deer Creek Speedway, those two proverbs seemed to play quite a significant role over the course of 50 laps in the Bigelow Homes Gopher 50, as Brandon Sheppard picked up his 11th win of the season after a brilliant move to take the lead and a stellar display of defense in the final laps to hold off a hard-charging Ricky Weiss.

After 33 laps of chasing and stalking leader Shane Clanton, Sheppard waited for the perfect moment to pull the trigger and take the lead. He found that moment on a lap 34 restart, driving his Rocket1 Racing ride hard into turn one in the low groove underneath Clanton and drag racing him down the backstretch.

“The Georgia Bulldog” hung tough on the outside and held the spot through the start/finish line to lead lap 34 but couldn’t maintain the advantage past the second turn. Sheppard was too good on the bottom. He carried that lead all the way through the checkered flag to win his third World of Outlaws Morton Buildings Late Model Series Feature in-a-row, and 48th all-time.

“I finally found a little bit better line through turns one and two,” Sheppard said of his patient move on Clanton to take the lead. “A couple of restarts allowed me to slow down and get to the middle-bottom groove, and get enough momentum built up to get around him.”

But once Sheppard captured the lead, it was game-on for the Rookie sensation from Headingley, Manitoba – Ricky Weiss. Of course, it’s always game-on for the Sweet-Bloomquist Chassis pilot as soon as the green flag drops, but what a display of car control he exhibited over 50 laps, going from his ninth-place starting spot to inside the podium before halfway.

Weiss had been working on the leaders for several laps when he finally reached the rear bumper of Clanton, making light work of the Capital #25 on a lap 37 restart to jumpstart his pursuit of Sheppard. By lap 43, Weiss had driven to within inches of “The Rocket Shepp” and his rear bumper and began driving deep into turns three and four in search of an advantage on the bottom.

Once his patience with the aggressive corner entry ran dry on lap 47, Weiss tried a smooth-and-steady turn one entry on the middle-bottom groove and made it stick, making for a great door-to-door drag race down the backstretch. Into turn three they raced, Weiss seemingly looking for a slide-job opportunity, but a very untimely caution was thrown for a slowing Cade Dillard just ahead of them.

Weiss got one more shot at Sheppard on the restart, but ultimately came up just one spot short of his very elusive first career World of Outlaws win.

“I could see we were better in turns three and four, so I knew I wanted to make the move there,” Weiss said. “But right when I got beside him was when I heard the caution.”

“It is what it is,” a positive Weiss continued. “Hopefully, I’ll be racing long enough that the lucky ones come to me and we can say they saved us.”

This finish stands as Weiss’ sixth top-five and fourth podium finish of the year. Two of those podiums, including Saturday night’s, have now been runner-ups to Sheppard. But the five-time WISSOTA Late Models Champion is ready to improve by one spot, heading into a number of tracks he’s familiar with from mastering the northern Super Late Model tour like ABC, Ogilvie and Red Cedar.

“it’s nice to know that we’re going into tracks that we’ve seen before,” Weiss said. “We’ve got a lot of people we can talk to and it’s really not such a guess anymore. We know what gear to run, we know what the track’s going to do throughout the night, what tires to put on. It definitely helps.”

Despite Weiss’ solid Feature finish, his night didn’t exactly start off the way he had planned. After experiencing post-hot lap engine issues, Weiss and the crew pulled out their backup car and scrambled to get it race-ready. The quick turnaround time from hot laps to Qualifying caused them to miss their spot in the order, but Weiss was able to make it out for the one allotted lap, given to drivers who are late to Qualifying, which at least earned him a workable starting spot in his Drydene Heat race.

From there, it was all smooth sailing for the #7 team. Their integrity and determination earned them every bit of success they encountered on Saturday night.

“We’re just happy with how we turned out night around, having to pull out the backup car and thrashing to get it together,” Weiss said.

A very busy stretch awaits the Outlaws this week, as they next head to ABC Raceway in Ashland, Wisconsin for the Series debut at the facility on July 9, followed by a back-to-back-to-back series at River Cities Speedway on July 12, Ogilvie Raceway on July 13 and another track debut at Red Cedar Speedway on Sunday, July 13. Catch all the action LIVE on DIRTVision!

ONE STEP AWAY: Sheppard wins the Scorcher at Volunteer Speedway