Sheppard gets No. 12 in Outlaw Speedway Debut 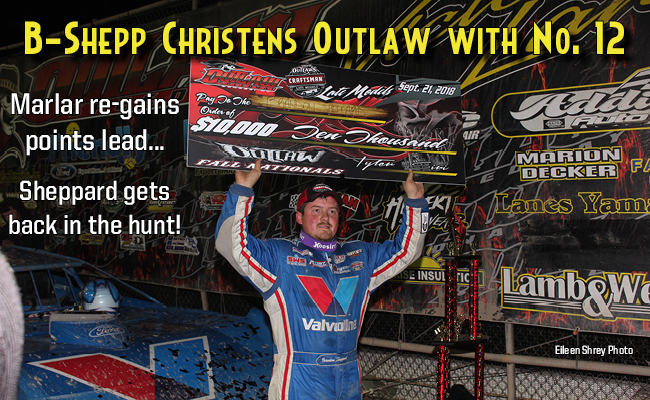 DUNDEE, NY – Sept. 23, 2018 – In what was originally scheduled to be a one-day show, Brandon Sheppard kept up the momentum over two separate days of racing at the Outlaw Speedway, as the World of Outlaws Craftsman Late Model Series made its debut at the small track in Dundee, NY. Sheppard picked up his 12th win of the season, which put him right back in the points championship hunt after falling victim to engine failure the night before at Selinsgrove.

The Outlaws were originally scheduled to race one complete show at Outlaw Speedway on Friday night, as part of the track’s annual Fall Nationals event. But Mother Nature had other plans, as torrential rain soaked the track after the heat races were completed. Series and track officials decided to run the feature race on Sunday evening, which turned out to be quite an exciting 50 laps.

Sheppard started the race from the fifth spot and quickly made his way into the top three by the second lap. He began to chase down leaders Shane Clanton and Mike Marlar, passing both of them by lap 20.

He would go on to battle a few yellow flag restarts and with third-place finisher Mike Marlar around the 2/3-mark, but surrendered the lead only briefly for one lap at a time in a back-and-forth battle that ended with Sheppard losing Marlar in lapped traffic. Ten laps later, Sheppard collected yet another checkered flag.

The track surface seemed much to the drivers’ liking, which made for some great multiple-lane racing. Sheppard made most of his passes on the low side, even through lapped traffic.

“We had a really good racecar, I could drive wherever I needed to go in lapped traffic and all that,” Sheppard said. “That definitely made it easier for sure. Our car has been really good, so I think it’ll be tough to beat if we can do that at the next few tracks.”

This was the night Sheppard needed to get back into the thick of the points battle with now-leader Mike Marlar and second-place Chris Madden. He’s still a whole 40 points behind Marlar but has four races left to make one last-ditch effort for the title.

“Someone will have to have a bad night for anything to happen,” Sheppard said. “But my team works really hard, nobody wants to win more than them guys do. We’re going to try our best and do the best we can to get it up there.”

Runner-up Devin Moran had quite a sporadic race, going as far back as 11th at one point early on. But one by one, he began to pick off each car in front of him, putting the No. 9 into the top three by lap 34. And with two laps remaining, Moran drove it way deep into turn three to put a textbook slidejob on third-place finisher Mike Marlar to lock up his second runner-up finish of the weekend.

“I was right there behind Mike, I just didn’t know where to go,” Moran said. “That middle was so slick, you couldn’t run though it hardly. I tried it there a couple times, just couldn’t keep up. So after that restart, Sheppard got away from us a little bit. I rode the bottom for a couple laps and that let me get by Mike, just ran out of time to go get Sheppard.”

Mike Marlar completed the podium and once again grabbed the points lead away from Chris Madden, who ended up breaking a left-front ball joint on lap eight. But it was certainly not handed to him, as Marlar had his hands full in the closing laps with Devin Moran all over him.

A tire compound decision may have been the losing factor, Marlar explained, as a lack of grip off the corner seemed to hinder the Delk Equipment No. 157 a bit in the long run.

“After a few laps, I would lose my steering capabilities,” Marlar said. “That was making me have to run a weird line. I actually got by Brandon two or three times, I think I got the lead and then I would start pushing and he would get back by me.”

Now with the points lead, Marlar is just trying to stay consistent.

“In racing, we can do all we can do as a person,” Marlar said. “Then it’s up to fate and materials. Anything can happen, we’ve just got to do the best we can do every night.”

Next up for the Outlaws is a two-day show in Chillicothe, Ohio at the Atomic Speedway for the Outlaw Invasion that was rained-out from earlier this season. September 28 and 29 are the dates; check out our FAQs page for all the details.