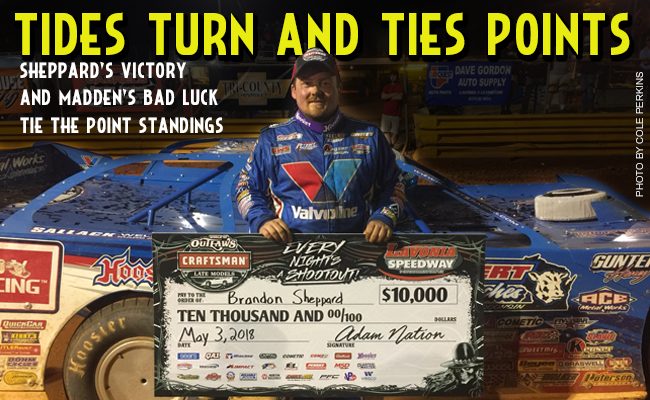 LAVONIA, GA– May 3, 2018– Brandon Sheppard led flag-to-flag in front of a packed house at Lavonia Speedway to claim his third World of Outlaws Craftsman Late Model Series feature win of the 2018 season.

The New Berlin, Ill. driver entered the event at Lavonia 40-points behind Chris Madden in the Series point standings. Unfortunately for Madden, on the half-way mark of the feature he suffered from a broken rear end which took him out of the remainder of the race. Sheppard and Madden are now tied for first in the point standings with 986 points.

“There’s a lot of ups and downs in this sport and I had some bad luck last week. Madden had some bad luck this week. It’s going to be tight for a long time I’d say,” said Sheppard. “We won’t get spread out until well past mid-season. It’s still early and we just have to keep working hard and digging. We want to win every night so as long as we can do that or come close, then we’ll be alright in the end.”

“We are really fortunate this year. We’ve been really good. I guess we’re headed towards where we were last year,” continued Sheppard.” You know, this is what it’s all about. There’s ups and there’s downs in racing week-in and week-out and we have to keep hanging no matter what happens.”

Sheppard started on the outside of pole sitter Devin Moran for the 50-lap event. On the first lap, the Rocket1 Racing driver commanded the lead. Lap-one had three separate cautions occur but Sheppard was able to defend the top spot during the restarts. Two additional cautions happened later in the feature, on lap four and lap 25, and although it erased the ground Sheppard had created over the field, he was never seriously challenged for the position either time.

“Lapped traffic was tricky,” said Sheppard. “I was trying to move around there and see where I could and couldn’t go. It just depended on how low the guy was getting in front of me and how much dust he was throwing up. I could run high two laps and the third lap it would be cleaned up enough and I could make a good one then the next time I come around it was dirty again. I have to thank all of these fans for coming out. It’s a Thursday night and I’m sure a lot of people took off work to come here. It’s cool to be able to race in front of a big crowd at a track that I’ve never been to before.”

Mike Marlar claimed the second position from Moran during the lap 25 restart. The driver of Winfield, TN maneuvered from fourth to second in just one lap. The closest distance between Sheppard and Marlar was 0.512 seconds with only seven laps remaining yet, once again, Sheppard was able to escape the charge.

“Brandon was good,” said Marlar. “I had a few strong points but he could really enter wide and turn back left really nice. You know, this week we built us a new car. I have to thank Josh and Jerry. We started on Sunday with a frame so I have a really awesome crew… We struggled a little bit there for a week or two we were running an old car and it’s been really good. It had 90-something races and won a bunch of them with it. But you know, everybody has new brooms right now and they’re sweeping a little better.”

Moran settled for third after having a fast car all night. The 2017 Rookie of the Year was the PFC Brakes Fast Time Award winner, won his heat, and started on the pole. Moran has collected two third-place finishes this season including one the previous weekend at Smoky Mountain Speedway. Third place is Moran’s best finish so far.

“We still didn’t get that win that we were looking for,” said Moran. “We were really good in qualifying and in the heat race but we were decent for the feature for the track conditions. We struggled so bad there a couple weeks ago but if we keep doing these podium finishes we’ll stay up front. I just want to say thanks to all the fans for coming out. There was an awesome crowd for a Thursday night.”

The World of Outlaws Craftsman Late Model Series continues its triple-header multi-track weekend on Friday, May 4 at Cherokee Speedway in Gaffney, SC, and on Saturday, May 5 for the fourth annual Billy Clanton Classic at Senoia Raceway in Senoia, GA.