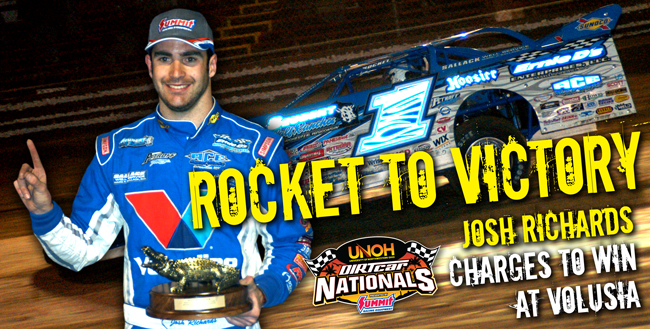 Rampaging forward from the 10th starting spot, Richards passed Steve Francis of Ashland, Ky., for the lead on lap 18 and marched on to a convincing victory in the 30-lap DIRTcar UMP Super Late Model A-Main that opened the full-fender portion of the 42nd UNOH DIRTcar Nationals Presented by Summit Racing Equipment.

Richards, 24, earned $7,000 for his sixth career triumph during the UNOH DIRTcar Nationals but first since 2010 when he captured the World of Outlaws Late Model Series season opener. He won the national tour’s lidlifter held during Volusia’s mid-winter racing meet every year from 2007-2010.

Francis, 45, settled for a runner-up finish in the Bowyer Motorsports Barry Wright car after starting from the pole position and leading laps 1-17. He ended the race trailing Richards’s Valvoline-sponsored Rocket Chassis house car by 1.387 seconds.

Donnie Moran of Dresden, Ohio, started and finished third in a MasterSbilt machine. Scott Bloomquist of Mooresburg, Tenn., also finished in the same position he started, driving his self-built Team Zero car under the checkered flag in fourth place after outdueling Tim McCreadie of Watertown, N.Y., who completed the top five in the Sweeteners Plus Warrior.

Continuing his strong return as a dirt Late Model regular after spending most of the 2012 season competing on the NASCAR Nationwide Series, Richards needed just six laps to crack the top five in Monday’s feature. He held fourth when the race’s lone caution flag – for a homestretch spin by Jason McBride of Carbondale, Ill. – slowed the action on lap 15.

Richards made short work of his remaining rivals after the restart, charging around the outside of Bloomquist and Moran within one circuit and doing the same to Francis on lap 18.

After falling short of Victory Lane at Volusia in 2011 and ’12, Richards was excited to reclaim the spotlight.

“I was a little nervous coming in here because we weren’t that good last year,” said Richards, who moved into a tie for seventh on the alltime UNOH DIRTcar Nationals by Summit Late Model win list with legendary drivers Larry Moore and Freddy Smith. “Even qualifying (on Monday) I didn’t feel great, but we qualified well so I was like, ‘Well, OK, we’re not that far off.’ We made a few changes for the heat race and we kind of got shuffled back and we had some fuel-pressure problems, but we still ran second on Scott (Bloomquist).

“For the feature we made some changes, and it was one of those things where we just went out there and ran hard. It was awesome to get up through there and get a win from 10th.”

Richards, who one year ago started from the pole position in the opening-night UNOH DIRTcar Nationals by Summit feature but tumbled to an eighth-place finish, registered his third victory in the last 10 days. He also won WoO LMS A-Mains on Feb. 9 at Screven Motor Speedway in Sylvania, Ga., and Feb. 17 at Bubba Raceway Park in Ocala, Fla.

Francis, who was victorious in the first Late Model feature of last year’s UNOH DIRTcar Nationals by Summit, was no match for Richards after the race was slowed at its halfway point.

“I didn’t really need that caution there,” said Francis. “But Josh and Mark (Richards) and them guys, their car has been good anyway. We knew in the heat race he was good. He started 10th back there (in the A-Main), but when I looked up at the board and saw he was second, I knew we were probably a sitting duck.”

Finishing in positions 6-10 was Don O’Neal of Martinsville, Ind.; Brady Smith of Solon Springs, Wis., who made the race’s biggest advance coming from the 20th starting spot; outside polesitter Ron Davies of Warren, Pa., who celebrated his 55th birthday on Monday; fifth-starter Eddie Carrier Jr. of Salt Rock, W.Va.; and Stormy Scott of Las Cruces, N.M., who made his first-ever start at Volusia.

With 48 cars signed in for action, group qualifying was utilized to set the starting lineups for six heat races in the first of three DIRTcar UMP Late Model programs during the UNOH DIRTcar Nationals Presented by Summit.

The DIRTcar Nationals Presented by Summit continues on Tuesday night (Feb. 19) with another UMP Late Model program topped by a 30-lap A-Main. The UMP Modifieds will also compete in triple 20-lap features to close out the division’s week-long meet.

BARBERVILLE, FL – Feb. 18, 2013 – The World of Outlaws Late Model Series is idle until Thursday night, but most of the Outlaws are racing tonight in the DIRTcar UMP-sanctioned opener of the 42nd UNOH DIRTcar Nationals Presented by Summit Racing Equipment at Volusia Speedway Park.

A 30-lap A-Main paying $7,000 to win is on tap this evening — and fans can watch all the action live by purchasing a DIRTcar Nationals video subscription at www.DIRTVision.com.

10:50 p.m. – Josh Richards was a man on a mission, surging forward from the 10th starting spot to win the 30-lap DIRTcar UMP Late Model A-Main.

The 24-year-old passed race-long pacesetter Steve Francis for the lead on lap 18 and never looked back. He beat Francis to the finish line by 1.387 seconds.

Provisional spots have gone to defending UNOH DIRTcar Nationals by Summit champion Dennis Erb Jr. (2012 DCN points) and Shannon Babb (2012 UMP national points). If Babb, who dropped out of the third B-Main in a cloud of smoke while running second, is unable to start the A-Main, the UMP points provisional would go to Jason McBride.

The UMP Modified ‘Gator Championship’ feature is halfway through its 30-lap distance. The Late Model A-Main will hit the track after the open-wheel division reaches the checkered flag.

9:25 p.m. – Billy Moyer and his son, Billy Jr., started side-by-side on the front row of the second heat, but both ran into trouble. Moyer Jr. was called for a jump on an opening-lap restart and both Moyers were penalized to the second row; then the father and son collided, setting off a turn-four scramble that sent Brandon Sheppard spinning. The elder Moyer collected himself to run second until spinning in turn two on lap five and immediately heading to the pit area, and Moyer Jr. finished fourth to miss the cut… Casey Roberts was scheduled to start on the front row of the third heat but was a scratch… Jimmy Mars ended up spinning in turn two on the opening lap of the fifth heat. His car’s nosepiece was damaged and he failed to qualify… The biggest battle of the heats was for the final transfer spot in the sixth prelim. Sixteen-year-old Bobby Pierce held off veteran Scott James for the position…

9:15 p.m. – Scott Bloomquist, Ron Davies and Steve Francis were victorious in heats 4-6, respectively, completing the first round of preliminary racing action for the UMP Late Models. Results from the heats are below:

8:45 p.m. – With three of the night’s six eight-lap heats, officials are taking a short break to bring the fields of the next three qualifiers from the upper pit area to the infield.

Dennis Erb Jr., who won a WoO LMS event at Volusia last year, Tim McCreadie and Donnie Moran were victorious in heats 1-3, respectively. The complete orders of finish are below:

The four fastest qualifiers from each group will be inverted to align each of tonight’s six eight-lap heat races. Three cars will transfer from each.

While a total of 48 cars are signed in for action tonight, there are several additional teams in the pit area who are sitting out the opener, including expected WoO travelers Darrell Lanigan, Bub McCool, Morgan Bagley, Eric Wells and Dillon Wood plus Jimmy Owens, Dale McDowell and Vic Coffey.

6:20 p.m. – The first of three consecutive nights of DIRTcar UMP-sanctioned Late Model racing during the UNOH DIRTcar Nationals by Summit is underway as tonight’s field of 48 entered cars have begun taking hot laps around the half-mile oval.