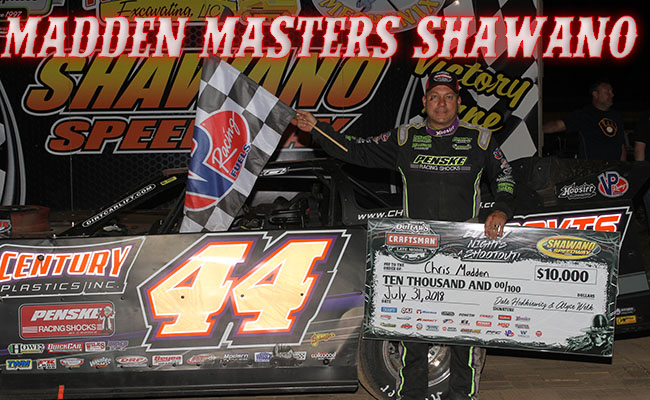 SHAWANO, WI — July 31, 2018 — The World of Outlaws Craftsman® Late Model Series returned to the big half-mile of Shawano Speedway, located west of Green Bay in Shawano, WI, for the next race on the Week of Wisconsin tour on Tuesday, July 31st. The $10,000-to-win Sundrop Shootout also marked the 10th all-time appearance by the most powerful stock cars in the world. When all was said and done after 50 laps, Chris Madden started on the pole and dominated all 50 laps en route to his sixth Feature win of the season. With the victory, the Gray Court, SC standout moved into a tie for the points lead in the chase for the 2018 Series Championship.

We’ve just been trying a lot of different things. But tonight, we came here and got back to base line and got back to what we’ve been doing before, and we had some speed in the car and sure enough, the car really came back to us,” exclaimed the 43-year-old standout after the race with his #44 Century Plastics / Barry Wright Race Cars / Clements Racing Engines machine surrounded by fans in the pits . “I can’t say I haven’t focused on the points, but it’s not my main concern. If we win races, we’re going to win the points. If we run in the top two or three, we’re going to have a shot at winning it. So, we’re just out here doing the best that we can do and be satisfied with what the good Lord gives us,” the Palmetto State driver added.

Madden and Davenport led the field to the green flag to start the 10th annual Sundrop Shootout as Madden powered his way past Davenport to take the lead heading into the first corner. Madden immediately pulled away from the field and opened a large advantage in the early going. Two cautions slowed the pace, both on lap seven as Tyler Bruening slowed on the backstretch. Then when the green flag came back out, Outlaws Rookie title contender, Brent Larson went around and slapped the turn four wall, ending his night early.

On what would be the final restart of the race, Madden again raced out ahead of everyone else while 2015 series champion, Shane Clanton was able to slip past Davenport for second. Clanton tried in vain to reel in Madden, who had built up a large advantage. Madden was able to get away from Clanton and methodically worked his way through lapped traffic in an effort to keep plenty of cars and real estate between himself and Clanton, a former two-time winner at the big ½-mile. Madden kept that comfortable advantage for the remainder of the race and cruised to his sixth Outlaws Feature win of the season and 21st of his career, good for 10th all-time in series history.

“These big tracks, I like these big places. A lot of people don’t, but these types of tracks are where I cut my teeth at on the big high-speed places. There’s a lot of speed and you almost have to drive this place like an asphalt car,” Madden continued. “Thanks to all the sponsors, our families for supporting us. Thank God for giving me the opportunity to come out here and do this and keep me safe, also keeping my family safe at home while I’m gone. Without all these people and all the support we get, we wouldn’t be able to come out here and do this,” he ended.

Finishing a season high second for the fifth time this season would be Clanton in his #25 Weldbank Energy / Capital Race Cars / Clements Racing Engines entry. “We’re just hoping to get that win soon. We’ve got so many seconds this year. We worked real hard after last night at Plymouth and put the car back together today, so this feels really good,” offered the 42-year-old from Zebulon, GA after the race. “This helps us out in points. Every position is two points, so we need all of them we can get. Devin (Moran) has been pretty good for the past month. Hopefully we can capitalize on tonight and adjust what we got and stay up front.”

Davenport, in his #49 Crop Production Services / Longhorn Chassis / Durham Racing Engines entry would complete the podium finishers in third, tying a season high finish with the Outlaws for the Blairsville, GA star. “We wanted to test tonight to make sure we had a good backup car for some upcoming races. Everything worked great. The Andy Durham Ford (Engine) ran great tonight, we still have that one in that car,” the 34-year-old stated after the race. “Got to thank all of my guys for working hard and finding the problems in the race car. Now we know we have two good race cars. I’m excited to get back to Cedar Lake (Speedway). We’ve ran good every time there. We’re going to run our other car with a Cornett in it and see if we can pick us up another crown jewel victory.” He smiled.

Don O’Neal fought off Devin Moran for fourth as Moran cooled off slightly from his recent hot streak, but still garnered his 15th top five finish of the season and complete the top five at Shawano. A.J. Diemel finished sixth in only his second appearance of the season as sole points leader going into the night, Mike Marlar came home in seventh and now shares the points lead with the race winner, Madden. Defending series champion, Brandon Sheppard earned the KSE Hard-Charger award with his 17th to eighth place run as defending race winner and 2011 series champion, Rick Eckert was ninth over Tyler Erb who would round out the top 10.

Earlier in the evening in PFC Brakes Qualifying, Devin Moran won his second in a row, third out of the last four and eighth Fast Qualifier award of his career with a 19.491 and won his Qualifier Heat. Madden and Jonathan Davenport picked up the other Qualifier Heat Race wins.

The Week of Wisconsin ends with the 31st annual USA Nationals weekend at the immaculate 3/8s-mile of Cedar Lake Speedway (WI) located just across the Minnesota/Wisconsin state line and northeast of Minneapolis, MN in New Richmond, WI on Thursday-Friday-Saturday, August 2-3-4th. A full Outlaws show, paying $6,000 to win kicks off the weekend on Thursday, August 2nd while Friday, August 3rd is Qualifying night featuring the unique Double Heat Races format, for the big $50,000 to win main event, the highest paying race on the 2018 Outlaws schedule, on Saturday, August 4th. The races at Cedar Lake will be career events #24 & #25 all-time for the Outlaws.