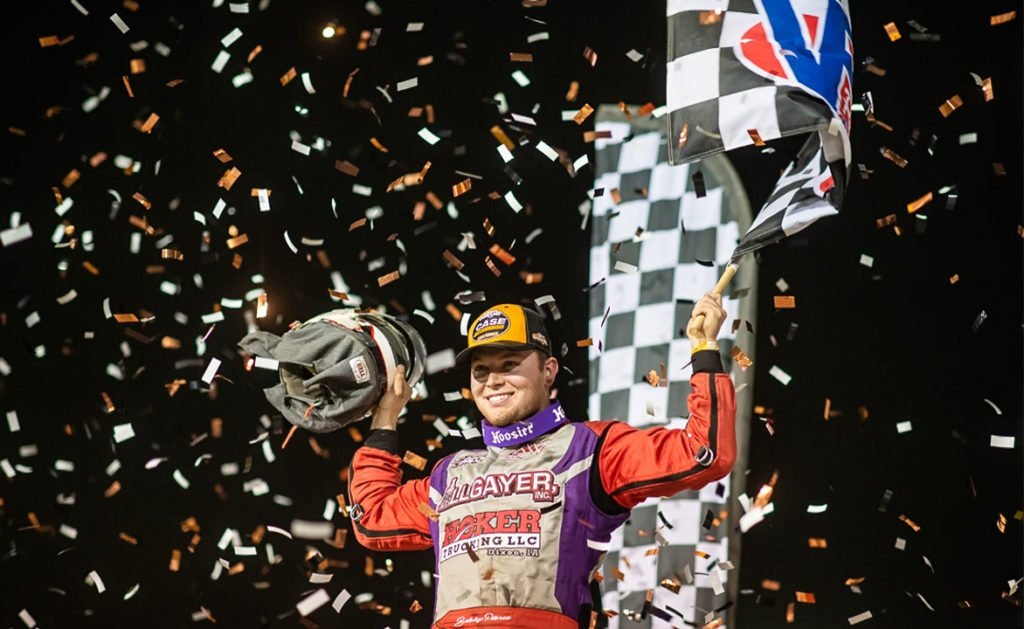 Bobby Pierce had one thing on his mind before the World of Outlaws CASE Construction Equipment Feature Friday at Tri-City Speedway. Win the race off Turn 2.

The “Smooth Operator” accomplished that feat, thundering past Ryan Unzicker and leading all 40 laps for his second Series victory of 2022.

Pierce, who started on the pole, realized the importance of that position before the race began.

“I noticed [the track] wasn’t all that tacky,” Pierce said. “I was glad that I drew the pole and had a good start and had really good restarts.

“It was the perfect night for us. We needed it after all the bad luck we’ve been having and how hard the crew worked the past few days.”

While the Oakwood, IL driver dominated the race, he had concerns toward the end. Pierce was worried about stepping to the outside as the laps wound down.

“I was getting loose off Turn 2, and the crumbs on the bottom were throwing up,” Pierce said. “I figured I might have a good enough gap from second place that if I made a bobble, I could get back down and protect. But I was worried.

“I just had to not make mistakes, and it was my race to lose.”

Pierce’s $10,000 triumph is his fourth career World of Outlaws Victory and second in his home state.

Kyle Bronson crossed the line second, his third top-five of the season with the World of Outlaws CASE Late Models.

The Brandon, FL driver took advantage of his third starting spot to grab second on the first lap.

“It was bottom dominant there for most of the race, but they did everything they can; there were a lot of race cars,” Bronson said. “I kind of slowed down in the middle of the race and took care of my tires. We just gotta be one spot better and gotta learn how to redraw a little better, I guess.”

Ryan Gustin finished third, his second straight Series podium. The “Reaper” fell back a few spots early in the race before a Lap 11 restart when he passed three cars in six laps.

Gustin felt he had the best car in the Feature but couldn’t get by Bronson and Pierce.

“It kind of circled up around the bottom, but that’s part of it,” Gustin said. “It was smooth and slick for the start; it’s just kind of one of them deals. I think we had the best car. We just weren’t able to do anything there.”

From El Paso, IL, Ryan Unzicker finished fourth, his first top-five of the season with the World of Outlaws.

While he felt starting on the outside didn’t help his chances of winning, he’s still happy to walk away with a top-five.

“I told myself driving down here [Friday] that if I ran top-five, I’d be happy as heck,” Unzicker said. “I’m a little bummed, honestly. Anytime you start on the front row and back up a couple of spots, you know it’s still a great run for our team, but it’s obviously, you know, going backward.

“A couple of spots kind of hurt, but it’s great momentum.”

Kyle Hammer, the Rookie of the Race, rounded out the top-five, the second of his World of Outlaws career. He took advantage of his fifth starting spot to hold on to the top-five run.

“We got lucky we started on the bottom,” Hammer said. “They reworked it, and it gave us good traction for the first couple of laps. Honestly, I didn’t expect Gustin to be coming around on the top with everyone running the bottom in front of us, so that was kind of a surprise.

“To be able to settle in and at least get a top-five is a pretty good night for us here.”

UP NEXT: The World of Outlaws CASE Construction Equipment Late Models travel to Missouri on June 24-25 for the inaugural St. Louis Firecracker Faceoff.

If you can’t make it to the tracks, watch all the action live on DIRTVision – either online on with the DIRTVision App.