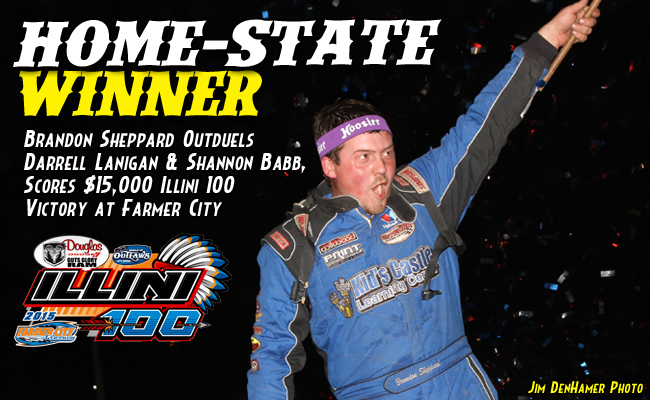 Sheppard, the 22-year-old New Berlin, Ill., driver who cut his teeth at Farmer City and other central Illinois bullrings, advanced from his 12th starting spot in the 75-lap World of Outlaws Late Model Series event and overcame both Darrell Lanigan of Union, Ky., and Shannon Babb of Moweaqua, Ill., to become just the second home-state driver to win at the Illini 100.

“There’s a reason why it’s my favorite racetrack in the country,” said Sheppard, who earned the fifth WoO LMS victory of his young career. “Not only do we run good here, but it usually produces pretty good racing.”

Lanigan settled for second in the Illini 100 finale for the second consecutive year, while Babb, who last year became the first Land of Lincoln driver to win the event, finished third. Bobby Pierce of Oakwood, Ill., was fourth with WoO LMS points leader Shane Clanton of Zebulon, Ga., rounding out the top five.

Sheppard entered the lead battle just before the race’s halfway point as he and Lanigan began to catch Babb and second-running Pierce. Both Sheppard and Lanigan moved around Pierce shortly after halfway, but neither could get clear of the other long enough to make a serious challenge on Babb.

A lap-47 restart gave Sheppard the opportunity he needed. With a strong run off the top of turn two, Sheppard pulled ahead of Lanigan down the back straightaway and drove hard into turn three to slide ahead of Babb exiting turn four.

“I was trying to pace myself as much as possible,” Sheppard said. “But once I got to third and me and Babb and Lanigan were battling it out, I knew if Lanigan got to the lead he was going to be hard to pass. After that restart when he choose the bottom, I didn’t have any choice but to go as hard as I could for them two laps and try to get the lead.”

Sheppard did get to the lead, but his work wasn’t finished. After building nearly a straightway advantage, his car was hampered in the closing laps by damage from contact with the lapped car of Wendell Wallace of Batesville, Ark.

A furious late charge from Lanigan made matters worse, but Sheppard was up to the task. He avoided any more run-ins with slower cars and held on to beat Lanigan by 0.888 seconds at the finish line.

“I was getting real loose after me and Wendell got together and I was a little bit nervous,” Sheppard said. “The top blew off a lot in one and two as the race went on. We just kept going slower and slower and slower, but my crew guy was telling me I was alright.”

Settling for the runner-up finish for the second consecutive year at the Illini 100, Lanigan, who with the result closed to 68 points behind Clanton at the top of the WoO LMS championship chase, was disappointed to again come up short but was overall pleased with his weekend at Farmer City.

“We had a good piece here tonight, just qualified kind of bad,” said Lanigan, the three-time and defending WoO LMS champion. “All in all, the car was pretty awesome in the feature. I think we’ve ran second here two or three times. It’s about like (the Firecracker 100 at) Lernerville, but I like coming here. I like the crowd and I like the racetrack.”

After pulling away from an early battle with fellow front-row starter Chase Junghans of Manhattan, Kan., Babb appeared to be headed for his second Illini 100 victory until he began to fade around halfway. Switching his line around the track allowed him to close back in on Sheppard and Lanigan during the race’s closing laps, but the move came too late.

“I really wish I would’ve moved up a lot sooner on both ends,” said Babb, who raced for the first time in 2015 during Farmer City’s doubleheader Illini 100 weekend. “I rode around the bottom too long and the car got too tight down there. Brandon did a hell of a job and Darrell. Those guys are fun to race with.”

The race’s early portions featured an epic battle at the front between Babb and Junghans. The two No. 18 machines raced side-by-side for much of the race’s opening 20 laps until Babb used the low line to clear Junghans for the lead on lap 22.

The run-in between Junghans and Weaver was the first of the race’s six cautions. A lap-39 tangle between Josh Richards of Shinnston, W.Va., and Jason Feger of Bloomington, Ill., caused the second yellow flag, while a slowing Richards caused the third caution on lap 45.

A spin by Junghans back in the pack brought out the race’s fourth caution, while the fifth yellow flag waved when contact on the front straightway sent Don O’Neal of Martinsville, Ind., spinning from a top-10 position. Rick Eckert of York, Pa., slowed to bring out the final caution on lap 56.

The World of Outlaws Late Model Series returns to action May 1-2 with a North Carolina doubleheader at Friendship Motor Speedway in Elkin, N.C., on Fri., May 1 and Fayetteville (N.C.) Motor Speedway on Sat., May 2. Both events pay $10,000 to the winner.