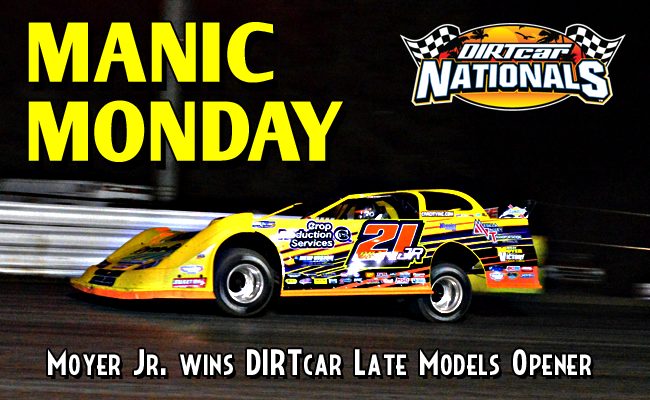 Moyer Jr., a World of Outlaws Craftsman® Late Model Series rookie of the year contender and son of legendary late model driver Billy Moyer Sr., started from the outside of row one in his Crop Production Services/Mesilla Valley Transportation 21JR for the 30-lap, $7,000-to-win feature at Volusia Speedway Park. Moyer easily made his way around pole-sitter Erb once the green flag fell.

Erb, driving the Black Diamond Chassis number 28E, had his hands full with fourth place starter Clanton, whom he battled with side-by-side for most of the race. Clanton utilized the outside line to stay even with the bottom-running Erb as the leader pulled away.

As the laps dwindled down, Erb and Clanton pulled within striking distance of the leader who was having trouble navigating lapped traffic. With 10 laps to go, the top three were separated by less than a second.

“I’ve never ran good in a feature here,” the Batesville, Ark.-native said. “The car was perfect – my dad did a heck of a job. Just having my dad here means more than anything. Growing up he didn’t always get to be there, he had to go out and make a living, so this means a lot.

“I’m really excited, we finally got a Gator and that means a lot to me. The car was phenomenal, I tend to overtighten myself a lot, so it was great having my dad here to help me on the adjustments. We’ll go to work tomorrow and hopefully get another one.”

Erb finished in the runner-up position after doing everything he could to muscle his way around the leader, but came up just short of capturing a coveted Gator trophy.

“I had a really good car and I was running him down there,” Erb said. “[Moyer Jr.] did a really good job of staying on his line and his car was really good. We will take a second place here and build on it for this week.”

Clanton faded during the latter parts of the race as 2014 World of Outlaws Rookie of the Year Frank Heckenast Jr. maneuvered around him for the third position.

“I buried myself after qualifying and had to come from fifth in the heat,” Heckenast Jr. said. “We did a lot better than last year, it took us until the end of the week to get going. I think we found something, so we will work on it, but I am still kind of mad at myself because I thought I could’ve finished better.”

The DIRTcar late models continue on Tuesday and Wednesday before the World of Outlaws Craftsman Late Model Series takes on DIRTcar Nationals on Thursday, Friday and Saturday.

Great seats remain for DIRTcar Nationals and are available by calling 844-DIRT-TIX (347-8849), or by visiting http://www.DIRTcarNationals.com. Infield parking will be available for $10 on a first come, first served basis to all fans with a pit pass and is available for sale at the turn four pit entrance.