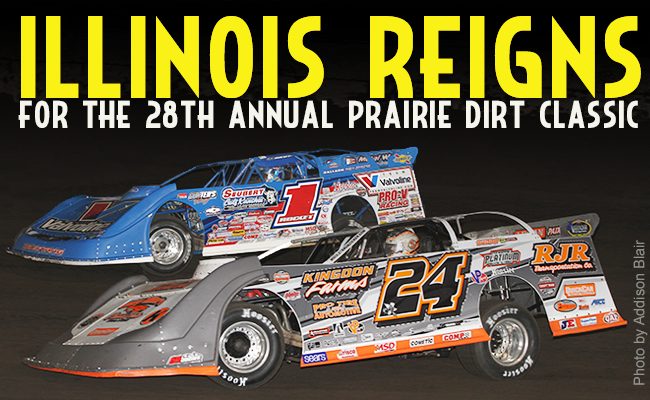 FAIRBURY, IL— July 29, 2017— The World of Outlaws Craftsman® Late Model Series and the team at Fairbury American Legion Speedway made history on Saturday night during the 28th annual Prairie Dirt Classic as the highest paying race to ever take place in the state of Illinois with a $30,000 payout. Brandon Sheppard wheeled his way to victory on Saturday night ultimately breaking a three-year winless streak for Illinois-drivers at the event.

The two-day show saw 65 of the nation’s best Dirt Late Model drivers compete on the Fairbury, Ill stage. The standing room only crowd nearlytripled the size of the all-American city as fans traveled from far and wide to experience one of the most anticipated Dirt Late Model events of the year.

The 28th annual Prairie Dirt Classic did not disappoint as the semi-banked quarter-mile dirt oval produced multiple lanes of racing every time cars hit the track. The 100-lap feature event was no exception, as three different drivers took command of the lead during the race including Shane Clanton, Ryan Unzicker, and eventual winner, Brandon Sheppard.

“This car is awesome every night we take it out of the box,” said Sheppard on his 11th win with the World of Outlaws Craftsman Late Model Series. “I have to thank my crew Dan, Austin, Joel, Mark, little Brian, everyone at Keyser Manufacturing, Durham Racing Engines they all keep this thing going night in and night out. I have to also thank my Dad and my Grandpa. I wouldn’t have a racing career if it wasn’t for them.”

Sheppard led 69 laps of the 100-lap event, taking total control over the lead on lap 40. He was even able to defend his lead after three restarts.

The fight for second and third came down to the last lap as Unzicker passed Moran on lap 99 to finish second in the 29-car feature.

“I tell you what, this feels freaking awesome running second to these guys,” said Unzicker. “It feels like I’m winning a million.”

Earlier in the day during the redraw, Unzicker was explaining to Series Announcer, Rick Eshelman, that he would be satisfied with a top-five finish because he had not made the show the past three years he entered into the Prairie Dirt Classic.

“This thing ran great tonight,” said Unzicker. “I was just thankful to be up there and running with these guys. Our car was pretty decent but these guys are damn good. It was a hell of a racetrack and it was ‘falsy’.

Devin Moran finished two spots shy of sweeping the weekend. On Friday, Moran turned the fastest lap during qualifying with a 12.627-second lap. The Rookie of the Year Contender then went on to lead every lap of the first of four Showdown Features to claim the win, ultimately placing him in the redraw for the 100-lap main event. Moran’s luck continued on Saturday as he pulled the no. one wrench from the Craftsman tool box putting him on the pole for his first time at the Prairie Dirt Classic.

Moran was passed on the first lap by Clanton who started directly behind him in third. Clanton led the first 23-laps of the 100-lap feature before getting passed by relentless track-regular, Unzicker. Within the first six-laps Moran had fallen outside of the top-five but the long-distance race granted him time to find his way back to the front of the pack.

“I wasn’t quite patient enough,” said Moran. “I kind of blew the deck out of it there at the end but congrats to [Sheppard and his crew] they’ve been on their own speed level this year and we are still just trying to play catch up. We got close there tonight but we just fell back too far early in the race and that just killed us. It’s our first time at FALS so we will definitely take a third-place finish.”

The World of Outlaws Craftsman Late Model Series heads to Wisconsin for the toughest stretch of the season: five races in five days. The Wisconsin swing with kickoff at Oshkosh SpeedZone Raceway on Aug. 1 before heading to Shawano Speedway on Aug. 2. The swing will conclude with the highest-paying Outlaw event of the season, the $50,000-to-win USA Nationals at Cedar Lake Speedway on Aug. 3-5.