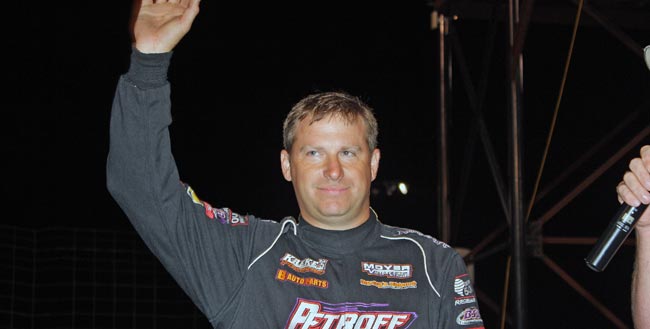 Defending their home-state turf in impressive fashion, drivers hailing from the Land of Lincoln kicked off the historic 24th annual Prairie Dirt Classic weekend by winning four of the six 15-lap heat races that highlighted a high-energy qualifying program.

Moweaqua’s Shannon Babb led the Illinois contingent’s assault on the World of Outlaws Late Model Series event, turning the fastest lap of the four home-grown heat-race victors en route to his triumph in the fifth preliminary. Derek Chandler of Pontiac, Mike Spatola of Manhattan and Kevin Weaver of Gibson City also did their home state proud with heat victories.

The only outside drivers to break the Illinois stranglehold on heat-race checkered flags were Dale McDowell of Chickamauga, Ga., and five-time Prairie Dirt Classic winner Billy Moyer of Batesville, Ark.

The 11 WoO LMS regulars in attendance struggled in the national tour’s first-ever visit to quarter-mile Fairbury oval, claiming just two of the 18 total transfer positions in the heats. Chub Frank of Bear Lake, Pa. (third place in Heat 3) and Shane Clanton of Zebulon, Ga. (second in Heat 5) were the lone World of Outlaws travelers to make the cut.

Among the Outlaws who failed to qualify through a heat were the top two in the current points standings, Josh Richards of Shinnston, W.Va., and Darrell Lanigan of Union, Ky. Both drivers finished fourth in their respective heats.

In all, 13 of the 18 drivers locked into Saturday night’s $20,000-to-win Prairie Dirt Classic 100 are from Illinois – making it abundantly clear that local knowledge of the high-banked bullring is an advantage.

“The more time you put in here, the more it helps you out,” said Babb, who frequented Fairbury early in his career. “I think the thing about this place is there’s not really one certain sweet spot. I think that you can go everywhere (to race) here, so it takes a new guy coming in here a few laps to figure out where he’s at.”

Babb, who owns 10 career WoO LMS A-Main victories but none since September 2010, is confident about his chances of keeping the Prairie Dirt Classic winner’s trophy in its home state.

“The car felt pretty good,” said Babb, a two-time winner of the Prairie Dirt Classic (2002, 2006). “I think it could’ve been better, but we started in the right place tonight – front row outside – and took advantage of it. Now hopefully we’ll make the right decisions and catch some breaks tomorrow (in the 100).”

The drive of the night was authored by 16-year-old Bobby Pierce of Oakwood, Ill., who made a stirring rally to claim the third and final transfer position in Heat 5. The teenage sensation – and son of five-time Prairie Dirt Classic winner Bob Pierce – was running a close third to Babb and Clanton on lap 11 when a run-in with a lapped car caused Clanton to get out of shape and led to Pierce stalling his machine on the inside of turn four. Pierce restarted at the rear and used the outside lane to charge back to third place, which he grabbed on the final circuit.

Fifty-two cars were signed in for the qualifying program, which began over an hour later than scheduled because track crews had to work overtime to sufficiently dry a track surface that was dampened by several afternoon showers.

Frankie Heckenast of Orland Park, Ill., was the fastest overall qualifier, turning a lap of 12.986 seconds in Group ‘B.’ It was the first-ever WoO LMS fast-time honor for Heckenast, who failed to qualify through his heat despite starting from the pole position.

Fairbury’s WoO LMS card on Saturday night (July 27) includes B-Mains, a Non-Qualifiers’ Race and the 100-lap Prairie Dirt Classic. A full UMP Modified show topped by a $3,000-to-win feature is on the undercard of the event, which is slated to start with hot laps at 5:45 p.m. CT.

More information on the Prairie Dirt Classic is available by logging on to www.fairburyspeedway.com.

FAIRBURY, IL – July 26, 2013 – The World of Outlaws Late Model Series ends a two-week break tonight with a first-ever visit to Fairbury American Legion Speedway, a quarter-mile oval that is hosting the biggest event in its history this weekend.

The 24th annual Prairie Dirt Classic — which, for the first time, will pay a whopping $20,000 to win — begins tonight with a qualiying program featuring Ohlins Shocks Time Trials, heat races and a 25-lap ‘Race of Champions’ for former PDC winners and Fairbury track champions. Saturday night’s PDC A-Main will run over the 100-lap distance.

11:10 p.m. CT – Four of the six 15-lap heat races were won by Illinois drivers: Derek Chandler, Mike Spatola, Shannon Babb and Kevin Weaver. The only non-Land of Lincoln victors were Georgia’s Dale McDowell (Heat 1) and Arkansas legend Billy Moyer (Heat 5)…. Of the 11 WoO LMS regulars on hand, only Chub Frank (third in Heat 3) and Shane Clanton (second in Heat 5) were able to transfer to the Prairie Dirt Classic…. The top two drivers in the WoO LMS points standings, Josh Richards and Darrell Lanigan, settled for fourth-place finishers in their respective heats…. The drive of the prelims was turned in by 16-year-old Bobby Pierce, who made a stirring rally to grab the third and final transfer spot in Heat 5. He was running in third place behind Babb and Clanton on lap 11 when he was the innocent victim of Clanton’s scrape with a lapped car, stalling his machine momentarily on the inside of turn four to draw a caution flag. Pierce restarted at the rear of the field but tossed his car around the outside of the track to grab third on the final lap…. Randy Korte passed Jimmy Mars on the last circuit of Heat 6 to snatch the third and final transfer spot….

Complete orders of finish from the heats can be seen here.

Land of Lincoln Leads The Way

Orland Park, Ill.’s Frankie Heckenast was the fastest overall qualifier, turning a lap of 12.986 seconds in Group ‘B’ to earn his first-ever WoO LMS fast-time honor. Dale McDowell of Chickamauga, Ga., topped Group ‘A’ with a lap of 13.068 seconds.

WoO LMS regulars struggled in time trials, with Shane Clanton’s 11th-fastest lap in Group ‘B’ the best of the 11 travelers. Chub Frank (12th-fastest in Group ‘A’) was the second-best Outlaw.

Six 15-lap heats will be hitting the track shortly….

8:30 p.m. CT – Bloomington, Ill.’s Eric Smith was fastest in WoO LMS hot laps, turning a lap of 13.362 seconds on a track surface that become progressively faster throughout the session.

Shane Clanton was second-fastest at 13.421 seconds. Kent Robinson, who is coming off a Late Model victory at Ohio’s Eldora Speedway during Tuesday night’s MudSummer Classic preliminary action, was third-fastest at 13.448 seconds, Jimmy Mars was fourth-fastest at 13.489 seconds and 16-year-old Bobby Pierce was fifth on the speed charts (13.496).

The UMP Modifieds are now qualifying, with WoO LMS time trials next up.

7:35 p.m. CT – Pack vehicles have pulled off the racetrack and the UMP Modified division has been called out to finish off the process of making the surface race-ready. The open-wheel class is moments away from turning up the wick for hot laps, and then the Late Models will hit the speedway for practice.

After the UMP Modified drivers each take one qualifying lap, WoO LMS time trials will begin. The two groups of Late Model qualifying (‘A’ and ‘B’) will set the lineups for tonight’s six 15-lap heat races, which will see the top-three finishers from each advance to tomorrow night’s Prairie Dirt Classic.

Due to the afternoon showers that struck Fairbury, track crews are still running in the racing surface. Officials are hoping to have Late Models and UMP Modifieds hit the speedway for hot laps within a half-hour or so.

5:55 p.m. CT – While today’s weather conditions have been wet and overcast — periodic showers have been hitting Fairbury American Legion Speedway for several hours, pushing back the scheduled start of tonight’s racing program — there’s a definite buzz in the air for the historic track’s biggest weekend ever.

Nearly 50 cars are signed in and waiting for the track surface to be run in for tonight’s action.