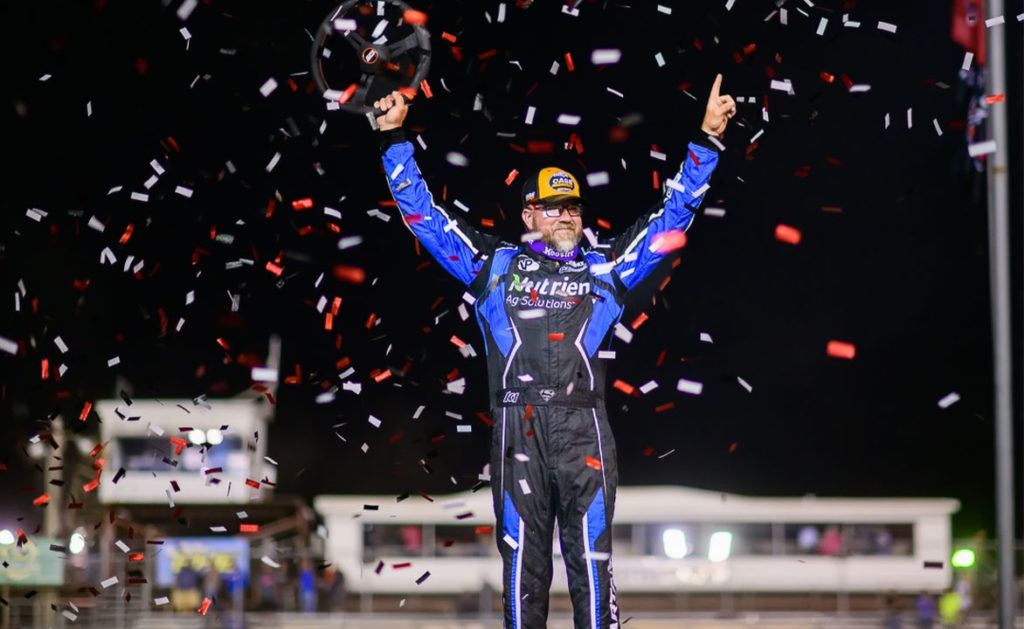 The term “faster than a speeding bullet” has been used to describe Superman since the 1940s. It’s only fitting that Jonathan Davenport lived up to that tagline Monday night at Boone Speedway.

“Superman” wasted no time getting to the front, blasting off from his fourth-place starting position to take the lead from Tyler Bruening on Lap 3. From there, he cruised through the final 47 laps to win the Hawkeye 50—his third World of Outlaws CASE Construction Equipment Late Model Series win of 2022.

The Blairsville, GA, driver stated he had a good feel of the track right before he took the green in the $20,000-to-win Feature.

“The car was really, really good from where we unloaded off the trailer,” Davenport said. “We just made some good, educated guesses since we couldn’t put the finger on what this place reminded us of. We were just going back and forth to three or four different tracks and trying to put everything together.

“I just was feeling the track before we took the green and that there was a little more grip up in the crumbs. There wasn’t quite a cushion, but there were some crumbs up top and some grip there.”

Davenport was surprised how quick the surface changed in just a few laps—a change leading to his pass for the lead.

“It slicked off in like one lap; it was crazy,” Davenport said. “We just happened to turn to the bottom, and [Bruening] went right through that slick and about looped it.

“We were fortunate to get by him, and we just kind of cruised from there.”

The victory is Davenport’s 13th World of Outlaws CASE Late Models win of his career.

However, while “Superman” flew away from the field, several drivers contended for the runner-up spot.

The Carpentersville, IL driver powered on the inside lane to grab second and started reeling in Davenport in traffic before a caution with 10 laps to go.

Erb wasn’t sure how the track would react to his Rocket Chassis at the start of the race.

“I was just happy to start eighth and get to second.”

Mike Marlar, the 2018 Series champion, crossed the line third. He passed Bruening in the closing laps to grab his fourth straight World of Outlaws podium.

The Winfield, TN driver was pleased with how racy the Boone Speedway surface was.

“The racetrack was great tonight,” Marlar said. “We got to race all over, top, bottom, middle, everywhere. I couldn’t ask for a better race surface.

“I was able to pack it in with the crumbs up there, and actually it stayed pretty clean up there. So, I kept rolling it out there, and probably my best shot of the race was late. I was catching up with Dennis toward the end, so definitely, the outside was working.”

Bruening, the 2021 World of Outlaws CASE Late Models Rookie of the Year, finished fourth—his second top five in a row with the Series.

The Decorah, IA driver stated he was happy for a good run in his home state against a stout field of Late Model competitors.

“I didn’t need either of those cautions, to be honest with you. I was in a good rhythm; I was hitting my marks really good, and I was kind of working my way back to [the front].”

Bobby Pierce, who won at Boone in 2021, rounded out the top five.

The Oakwood, IL driver made a late charge on the final restart to leave Iowa with a strong finish.

“The track kind of transitioned to, you know, how you had to run the bottom a certain way,” Pierce said. “I was really good down there if I ran it just perfectly, but I just didn’t have much traction anywhere else.”

Davenport’s efficiency Monday night a Boone made him look as though he was “faster than a speeding bullet.” That speed showed no matter when he unloads at a World of Outlaws CASE Late Models event his competitors need to be at the top of their game to become his kryptonite.

UP NEXT: The Most Powerful Late Models on the Planet head to Fairbury Speedway in Fairbury, IL, for the 32nd Running of the Prairie Dirt Classic, paying $50,000-to-win.