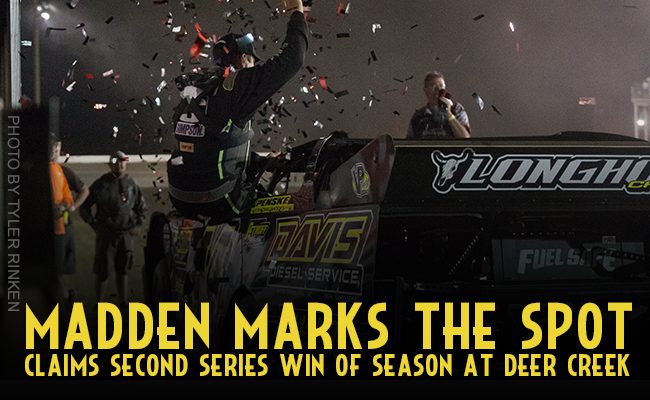 “We had a great car and I would like to thank my guys who worked hard this week to get this thing ready for me,” said Madden. “This win is for my crew member, Brian. His mom passed away earlier this week and he had to leave us.”

The 50-lap feature event saw three different leaders including Rodney Sanders, Devin Moran and Madden. Sanders held on to the lead for the first 22 laps of the feature before being passed by Rookie of the Year contender, Moran, who had made his way to the front from a fourth position start.

Moran held off charges from Sanders, Jimmy Mars and eventually Madden, despite multiple restarts derived from cautions— Joey Coulter with a left rear flat (lap 26), a tangle between Eric Wells, Jason Yaggy, Chris Simpson, and Nick Anvelink (lap 28), and Chad Mahder who got turned around on turn two (lap 39).

On lap 43, Moran and Madden ran door-to-door down the front stretch and into turn one. The close side-by-side action resulted in contact between the pair causing Moran to get spun around in turn two bringing out the yellow flag which ultimately sent the no.9 to the tail of the 24-car field. By the time the checkers fell, Moran had made his way to finish 17th.

“We ran the top there and got to going good and you know guys want to run the bottom and the top and I was there and I hate it for him,” said Madden.

Mars battled with Moran for most of the feature before being passed by Madden for second on lap 38.

“We were probably a third-place car there,” said Mars, who finished second in the feature. “Just kind of a bad deal there between Madden and Moran. We were going to run third and we got second I guess. We will take second and move on to the next race.”

Mike Marlar passed an impressive 19-cars to finish third in the feature at Deer Creek Speedway. Marlar has joined the Series during six races this season and has found his way to the podium four times.

“A wise guy told me today that I would finish on the podium and I don’t know how that happened after such a bad start,” said Marlar. “I would just like to thank this racetrack. This is probably the most racey track I’ve ever been to. This place is awesome and I hope [the fans] really treasure this place. This is an awesome racetrack.”

The field at Deer Creek Speedway for the 38th annual Gopher 50 was stacked with 36 Late Models and a full house of fans. The World of Outlaws Craftsman Late Model Series has an action-packed week coming up with three races in three days at Ogilvie Raceway on July 12, Hibbing Raceway on July 13, and River Cities Speedway on July 14.