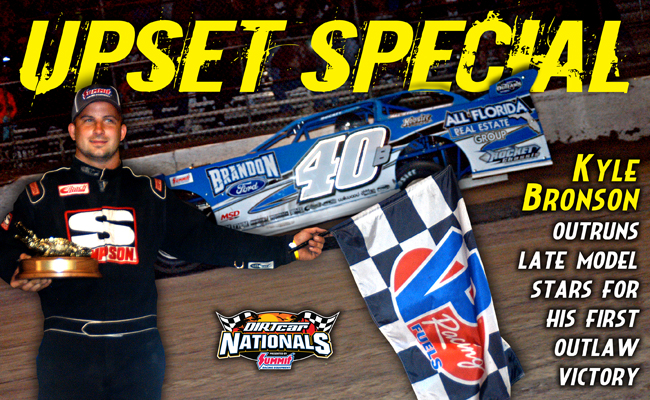 A 23-year-old open-wheel Modified standout in the Sunshine State, Bronson joined Thursday-night victor Casey Roberts of Toccoa, Ga., as unexpected first-time WoO LMS winners during the 43rd DIRTcar Nationals Presented by Summit Racing Equipment. His $10,500 triumph in the finale of the mid-winter motorsports meet also was the second of the week for a home state driver following the win by Ivedent Lloyd Jr. of Ocala, Fla., in the DIRTcar Racing-sanctioned event on Feb. 17.

“This is unbelievable,” said Bronson, whose win came in the just the eighth Super Late Model start of his fledgling racing career. “I’ve never doubted myself, but I dang sure didn’t think I was gonna come here and win the race. If you would’ve asked me (about winning a WoO LMS event) a couple days ago, I would’ve told you that you were crazy. We had our goals set (for the DIRTcar Nationals) to try and make all of (the features).

“I don’t know what to say. I’m so excited I don’t even know how to show it right now.”

Bronson started from the pole position but was outgunned for the lead at the initial green flag by John Blankenship of Williamson, W.Va. Bronson held strong in second, however, and rallied to grab the top spot from Blankenship on lap 17.

Bronson then survived two caution flags, strong challenges from Blankenship and Dale McDowell of Chickamauga, Ga., and a final-corner stumble to secure the milestone score. He crossed the finish line 0.706 of a second in front of two-time WoO LMS champion and current points leader Darrell Lanigan of Union, Ky., who inherited second when McDowell retired on lap 41 due to a broken right-rear caliper but wasn’t able to seriously threaten Bronson.

Blankenship settled for a third-place finish after leading laps 1-16. Scott Bloomquist of Mooresburg, Tenn., slipped out of the top five midway through the race but came back to finish fourth and clinch the overall DIRTcar Nationals by Summit Late Model points title for the first time in his career. Don O’Neal of Martinsville, Ind., completed the top five after starting 10th, earning his best finish of the week in his Clint Bowyer Racing mount.

Bloomquist, 50, emerged as the DIRTcar Nationals by Summit champion after never finishing worse than sixth in the week’s five A-Mains. He received a coveted gator-shaped trophy for his accomplishment.

“We’re proud to get it,” Bloomquist of the unique hardware that has become a trademark of the DIRTcar Nationals by Summit. “We’ve never run every race here during the week, but we decided to do it this year and I felt like we ran really good. We had a little problem with the car tonight that I don’t really want to mention, but we still had a decent run and were good all week.”

Bloomquist – nor anyone else in the talent-laden field – was able to handle Bronson. Running a Rocket car/ProPower engine combination owned by his uncle and aunt, Wayne and Shirlene Hammond of Tampa, Fla., Bronson demonstrated ability that belied his limited experience in open-competition Late Model racing.

When Blankenship jumped out to the early lead, Bronson didn’t lose his composure. He simply took the advice of Rocket Chassis co-owner Mark Richards, who provided valuable setup assistance throughout the week, and remained patient.

“Mark Richards told me at the beginning of the race that Blankenship was gonna drive real hard and he told me not to race him,” said Bronson. “He told me to ride as long as I could until an opportunity showed up. I tried to ride as long as I could, but when I had my opportunity (to make an outside pass for the lead on lap 17) I didn’t want to follow him no more. I kind of wanted to get myself in clean air.”

Moments after assuming command, Bronson was taken out of lapped traffic by a lap-20 caution flag for Chub Frank of Bear Lake, Pa., who slowed in turn three. The race’s only other caution flag, on lap 35 when Shane Clanton of Zebulon, Ga., slowed with a crushed nosepiece sustained when he ran into the back of York, Pa. driver Rick Eckert’s car, also kept Bronson free of slower traffic.

“I usually hate seeing cautions, but I was actually happy to see every caution I seen because it got me back into clean air,” said Bronson, who was under heavy pressure from Blankenship and McDowell when the yellow flag flew on lap 35.

Once McDowell, who passed Blankenship for second place on the lap-35 restart, pulled off on lap 41 – just a few laps before he said he planned to step up his bid for victory – Bronson was effectively home free. His only scare was a slip rounding turn four with the checkered flag waving in front of him.

“I started getting tighter and tighter and kind of jumped the cushion down there, misjudged it,” Bronson said of the final lap. “I was kind of getting ready for a slide job (from a challenger) and actually just missed my corner. Fortunately I was able to gather it back up and hold on.”

Bronson got back in the groove in time to register by far the biggest win of his career, which he launched a mere three years ago. He’s already piled up more than 60 open-wheel Modified victories – including a DIRTcar Nationals by Summit UMP Modified triumph on Feb. 12 – and a handful of wins in spec- and crate-engine Late Model events in Florida, but none compare to this success.

“I just can’t thank all my guys enough, especially (team owners) Wayne and Shirlene (Hammond),” said Bronson, whose two previous WoO LMS A-Main starts resulted in finishes of 24th on Aug. 5, 2013, at Independence (Iowa) Motor Speedway and 25th on Thursday night at Volusia (he failed to qualify for the 2013 USA Nationals at Wisconsin’s Cedar Lake Speedway in his WoO LMS debut). “If it wasn’t for them I wouldn’t be driving this race car. I’d be back at East Bay (Raceway Park in Gibsonton, Fla.) racing Street Stocks.”

With 35 cars entered in the evening’s action, Ohlins Shocks Time Trials were split into ‘A’ and ‘B’ groups. The first half competed for starting positions in heats one and two and the second half racied against the clock to align heats three and four.

Bloomquist turned a lap of 16.726 seconds in Group ‘A’ that was the quickest overall of the night. It was his first WoO LMS fast-time honor of 2014 and the 11th of his career.

The WoO LMS will sit idle for one month before returning to action with a doubleheader on Fri., March 28, at Lonestar Speedway in Kilgore, Texas, and Sat., March 29, at I-30 Speedway in Little Rock, Ark.

10:40 p.m. – Tampa, Fla.’s Kyle Bronson became the latest upset winner of a World of Outlaws Late Model Series event, capturing the 50-lap A-Main for his first-ever victory behind the wheel of a Super Late Model.

A 23-year-old open-wheel Modified standout in the Sunshine State, Bronson started from the pole position but was outgunned for the lead at the initial green flag by John Blankenship. Bronson held strong in second, however, and rallied to grab the top spot from Blankenship on lap 17.

Bronson survived two caution flags, strong challenges from Blankenship and Dale McDowell and a final-corner stumble to secure the milestone triumph. He crossed the finish line 0.706 of a second in front of two-time WoO LMS champion Darrell Lanigan, who inherited second when McDowell retired on lap 41 but wasn’t able to seriously threaten Bronson.

Blankenship settled for a third-place finish after leading laps 1-16. Scott Bloomquist slipped out of the top five midway through the race but came back to finish fourth and clinch the overall DIRTcar Nationals by Summit Late Model points title for the first time in his career. Don O’Neal completed the top five after starting 10th.

The DIRTcar Big-Block Modified B-Mains ended moments ago, setting the stage for the 50-lap WoO LMS headliner. The field is now forming for the A-Main.

9:05 p.m. – Scott Bloomqusit, Darrell Lanigan, Dale McDowell and Frankie Heckenast Jr. were victorious in the four 10-lap heat races…. Bloomquist authored the most dominant drive in the first heat, beating Dennis Erb Jr. to the finish line by 5.385 seconds…. Lanigan’s second-heat triumph came by a solid 4.017 seconds over Tim McCreadie, who made the redraw for the feature in what is shaping up as his best run of the week…. After scoring podium finishes from mid-pack starting spots on Wednesday and Thursday, McDowell assured himself a better position for the green flag with a triumph in Heat 3…. Heckenast outdueled Floridian Kyle Bronson for the lead and marched on to win the fourth heat. The 23-year-old Bronson, however, drew the pole position for the A-Main…. John Blankenship will start second in the 50-lapper, followed by McDowell, Erb, Bloomquist, Heckenast, McCreadie and Lanigan….

Bloomer on the attack

7:30 p.m. – With his late-race defeat in Thursday night’s WoO LMS A-Main still fresh in his mind, Scott Bloomquist blitzed the field in Ohlins Shocks Time Trials, turning a lap of 16.726 seconds in Group ‘A’ that was the overall fastest of the qualifying session.

Dale McDowell, who has come from mid-pack to earn podium finishes in the last two DCN events, was fastest in Group ‘B’ with a lap of 17.238 seconds.

Bloomquist and McDowell will be joined by Darrell Lanigan and Kyle Bronson as polesitters in tonight’s four 10-lap heat races. The top-four finishers from each prelim will transfer to the A-Main, with the top-two drivers across the finish line redrawing for the first eight starting spots in the feature.

Heats for the DIRTcar Big-Block Modifeds will kick off tonight’s racing action momentarily, with the WoO LMS heats to follow.

6:30 p.m. – It’s been a DIRTcar Nationals by Summit to remember for the dirt Late Model division, which has seen three of the week’s four full-fender features captured by first-time DCN winners.

And adding even more uniqueness to the ultra-competitive meet, the three first-time DCN winners — Ivedent Lloyd Jr. of Ocala, Fla. (Monday), Kenny Pettyjohn of Millsboro, Del. (Tuesday) and Casey Roberts of Toccoa, Ga. (Thursday) — are not fulltime professional drivers. Lloyd operates a machine shop, Pettyjohn is the owner of the KPR speed shop (a Rocket Chassis dealer) and Roberts is an auto mechanic by trade. The week’s lone winner who makes his living driving a dirt Late Model is Scott Bloomquist, who topped Wednesday night’s DIRTcar Late Model A-Main.

If the trend of first-time DCN winners continues tonight, it would make the first time since 2004 that four drivers broke through for first-ever DCN victories. That year’s first-timers were Shannon Babb, Tim McCreadie, Greg Johnson and Jackie Boggs.

6:10 p.m. – Hot laps are underway for the 35 dirt Late Models signed in to compete in tonight’s WoO LMS program, which draws to a close the 43rd DIRTcar Nationals by Summit.

The Volusia pit area were left a bit muddy by the late-afternoon thunderstorms that washed out last night’s action, but no additional rain hit the speedway today and the sun actually came out late in the afternoon, assisting in the drying process.