The veteran Dirt Late Model racer from Mooresburg, Tenn., made up for all that lost time with a fantastic performance in Friday’s 25-lap main event, outdueling Brian Shirley of Chatham, Ill., to claim a $6,000 victory in the first leg of a World of Outlaws Late Model Series doubleheader weekend at Farmer City’s quarter-mile oval.

The Illini 100 weekend continues on Saturday with another complete WoO LMS slate of racing highlighted by the 75-lap, $15,000-to-win Illini 100 finale.

Making his first appearance at Farmer City since 2002, Bloomquist recovered from a poor qualifying effort during Friday’s preliminary action to win his heat race from the fourth spot then roared to the front of the A-Main from his sixth starting position before overcoming Shirley in a tight back-and-forth battle.

“It’s been a long time since we’ve been here,” said Bloomquist, who drove a Reece Monuments-sponsored Sweet-Bloomquist machine to the victory. “The track was real racy. It had one little hole in the middle of one and two that seemed to mess other guys up, but we could float right through it.”

Shirley settled for second after starting from the pole and twice leading the race. He was followed by Tim McCreadie of Watertown, N.Y., who ran close to the leaders for most of the distance but never could mount a strong enough charge to make a serious bid for the lead. Don O’Neal of Martinsville, Ind., was fourth at the finish, while three-time WoO LMS champion Josh Richards of Shinnston, W.Va., advanced from his 18th starting spot to round out the top five finishers.

Bloomquist established himself as a contender with a three-wide move from sixth to fourth on the race’s opening lap. He then made quick work of Mike Marlar of Winfield, Tenn., to take the third spot.

Taking full advantage of the race’s only restart with three laps completed, Bloomquist powered around McCreadie in turns one and two to grab second, then crossed to the bottom groove down the back straightaway to pull even with Shirley in turns three and four.

Bloomquist completed the pass for the lead the next time through turns one and two and began pulling away. But Shirley battled back during the race’s middle portions and retook the lead with a high-side pass on lap 15.

Shirley never could quite break free from Bloomquist after edging ahead, and a bout with turn-four cushion gave Bloomquist the chance to pull back ahead on lap 18. Bloomquist never looked back from there, pulling to an advantage of 1.595 seconds at the finish line.

“This is one of the ones that you can say was fun,” said Bloomquist, the 2004 WoO LMS champion who claimed the 27th series victory of his career and first since February of 2013. “Once I saw him out there, I stayed focus and tried just to get more out of the bottom. I knew I could pick it up a notch because I was kind of in a zone just trying not to tear the tires up.

“When he got by I said piss on the tires and just went after it. The car responded and the tires stayed good.”

Shirley, a veteran of the Illinois bullrings and a former DIRTcar UMP Summer Nationals champion, was doing his best to turn back Bloomquist’s bid to retake the lead in piloting his Riggs Motorsports Rocket Chassis around the track’s high line, but a fit with the turn-four cushion on lap 18 cost him.

“We got beat by one of the best guys in the business,” said Shirley, whose lone WoO LMS victory came at Lincoln (Ill.) Speedway in 2007. “I hit (the cushion) one time and that really cost me a lot of time. It’s just one of those things that you flirt with when you’re up there running it.

“All in all, we’ll just do what we can to get the car better next time and see what tomorrow brings.”

The race’s only caution appeared with three laps complete when Boom Briggs of Bear Lake, Pa., and Chase Junghans of Manhattan, Kan., tangled in turns three and four.

WoO LMS points leader Shane Clanton of Zebulon, Ga., saw his streak of eight consecutive top-five finishes to start the season come to end with a 23rd-place finish. Clanton, who won four races during the tour’s seven-race trek through Georgia and Florida in February, saw his lead in the championship chase cut from 92 points entering Friday’s event to 74 points over defending series champion Darrell Lanigan of Union, Ky., who finished 14th and 80 points over Richards.

Pit gates open at noon with grandstand gates opening at 1 p.m. More information on the Illini 100 at Farmer City Raceway is available by logging on to www.farmercityracing.com. 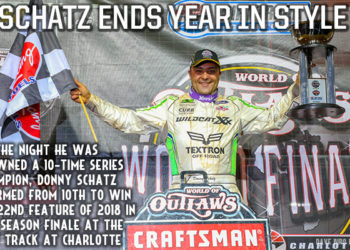 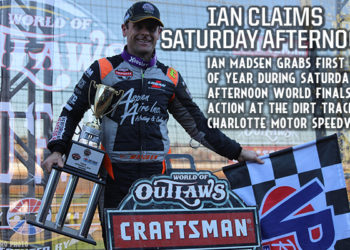 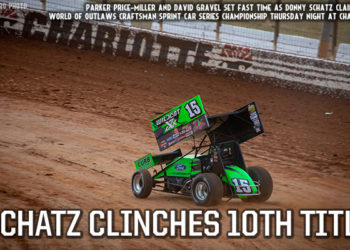