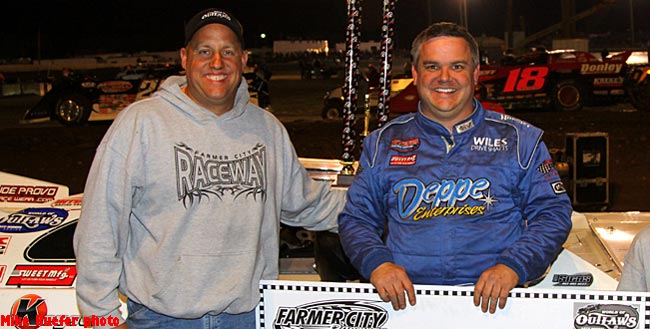 Racing in front of a standing-room-only crowd, Mars roared off the outside pole starting spot to grab the lead at the initial green flag and never relinquished the position. He turned back repeated challenges from Lanigan during the race’s final circuits to pocket the $20,000 top prize.

“I’ve never really been all that good here at Farmer City where I’ve been in contention to win,” said Mars, who recorded his first-ever triumph at the quarter-mile fairgrounds oval. “So to come out of here with a win – to me, it’s a true honor.”

Mars, 40, drove his Mars Race Car across the finish line 0.308 of a second in front of Lanigan, who advanced from the sixth starting spot in his Rocket mount and retained his WoO LMS points lead. Shannon Babb of Moweaqua, Ill., finished a distant third in a Victory Circle machine, defending WoO LMS champion Rick Eckert of York, Pa., placed fourth in a Team Zero by Bloomquist car and Brian Birkhofer of Muscatine, Iowa, was fifth in an MB Customs chassis.

In a blistering-fast race that was slowed by just two caution flags, Lanigan surged to second place on a lap-22 restart and took up the chase of Mars. The 2008 WoO LMS titlist was on Mars’s rear bumper when the second caution flew on lap 80 and made several bids over the remaining distance but couldn’t pull off a pass.
{vimeo}39565743{/vimeo}
Mars knew Lanigan was nipping at his heels, but he never made a mistake en route to his fifth career WoO LMS victory. It was his third triumph in a 100-lap event on the national tour, joining his 2009 and 2011 victories in the Firecracker 100 at Lernerville Speedway in Sarver, Pa.

“I couldn’t keep my momentum up as much as I wanted to on the bottom and I’d get a little loose off (turn) two,” said Mars, whose previous Illini 100 finishes at Farmer City included a fourth in 2009 and 12th in 2010. “My car was really flawless early on when the track was completely slick, but it started to get a little bit narrow and I couldn’t turn quite as good as I needed to. I was just trying to protect it as much as I could.

“But Darrell’s a good driver, we race hard against each other and we respect each other, so I’d have to say I think it would’ve been a clean pass (if he made a move). It wouldn’t have been anything other than that.”

Lanigan, 41, settled for another runner-up finish in a 100-lap WoO LMS show. His only century-grind victory on the circuit came in last year’s ‘Cash Cow 100’ at Columbus (Miss.) Speedway.

“We had an excellent car,” said Lanigan, whose previous best finish in the Illini 100 was seventh, in 2009. “I just wish we could’ve started a little closer to the front. Once we got to second it got tough to make a move. I tried everything I could but I wasn’t getting by (Mars) unless he made a mistake.”

Babb, 38, fell short of a coveted checkered flag in the Illini 100 for the fourth time. While he remained the only driver to finish among the top five in each of the event’s editions, he desperately craves a victory in his home state’s richest race.

Babb started third but ran in the fourth position for the first 58 laps of the event. He finally regained third when he overtook Vic Coffey of Caledonia, N.Y., and his legion of fans were roused when the lap-80 caution flag – for a tangle in turns one and two involving Coffey and two-time Illini 100 winner Billy Moyer of Batesville, Ark., who spun together while battling for fourth – gave him a shot at the leaders.

But Babb was unable to find any traction in the track’s upper lane on the restart and gradually lost ground to Mars and Lanigan, leaving him nearly a straightaway behind at the finish.

“The top (groove) always looks good there,” said Babb, whose previous Illini 100 finishes were second in 2008 and 2010 and fifth in ’09. “But it was wishful thinking. There just wasn’t nothing up there at all.

“We have to be happy with third tonight. Those two guys (Mars and Lanigan) did a helluva job. I got to watch a good race up front.”

Saturday night’s program began with a pair of 20-lap B-Mains won by Tim McCreadie of Watertown, N.Y., and Jason Feger of Bloomington, Ill.

The WoO LMS is idle until embarking on a Southeastern swing to North Alabama Speedway in Tuscumbia, Ala., on Fri., April 27, and Tazewell (Tenn.) Speedway on Sat., April 28.