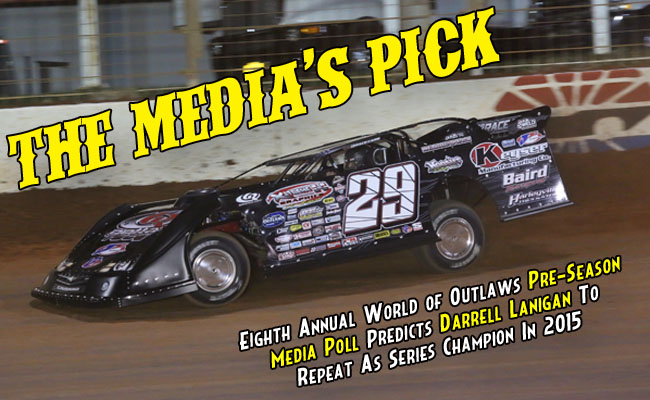 Lanigan will begin his quest to become the first four-time WoO LMS champion this weekend (Feb. 6-7) during the Winter Freeze at Screven Motor Speedway in Sylvania, Ga. The season-opening doubleheader kicks off a busy stretch of World of Outlaws racing in Georgia and Florida that also includes two series events during the Bubba Army Winternationals Feb. 14-15 at Bubba Raceway Park in Ocala, Fla., and three events during the DIRTcar Nationals Feb. 19-21 at Volusia Speedway Park in Barberville, Fla.

A total of 40 writers, photographers and broadcasters who cover the WoO LMS participated in this year’s Media Poll, which asked the press members to predict the top-five finishers in the tour’s 2015 points standings. Points were distributed to each driver named on the ballots using a 5-4-3-2-1 system.

Lanigan once again dominated the voting, earning 190 of a possible 200 points to top fellow three-time WoO LMS champion Josh Richards’ 154-point total. The driver of the GottaRace.com No. 29 Club 29 Race Car had his name appear on all 40 ballots, earning a poll-best 32 first-place, six second-place and two third-place votes.

The majority of poll participants also predicted Lanigan will again lead the series in victories in 2015, with 30 respondents picking him to win the most WoO LMS A-Mains. Of those who picked Lanigan to win the most series races, the average number of wins was 12.3. Eight ballots tapped Richards to win the most A-Mains, while one selected 2006 WoO LMS champion Tim McCreadie of Watertown, N.Y., and another picked 2011 series champ Rick Eckert of York, Pa.

While the media doesn’t expect Lanigan to match his record-setting 2014 win pace, they do expect him to walk away with a number of big-money victories this season. He was voted the favorite to win two of the circuit’s three richest events: the Prairie Dirt Classic on July 24-26 at Fairbury (Ill.) American Legion Speedway ($26,000); and the USA Nationals on July 31 – Aug. 1 at Cedar Lake Speedway in New Richmond, Wis. ($50,000). He just missed being the favorite to also win the Firecracker 100 on June 25-27 at Lernerville Speedway in Sarver, Pa. ($30,000 to win), losing out to Richards by just one vote.

Lanigan’s overwhelming popularity as the media’s championship favorite is likely aided in part by uncertainly in Richards’ performance level as he returns to the Valvoline-sponsored No.1 Rocket Chassis house car after sitting out all but the final two series events last season due to medical reasons. Richards, who joins Lanigan as the only three-time modern-era WoO LMS champions, did still receive six of the possible 40 first-place votes. Appearing on all but one ballot, Richards received 25 second-place and eight third-place votes.

McCreadie and Eckert each received a single first-place vote. McCreadie, who pilots the Sweeteners Plus No. 39 Rocket, also earned seven second-place votes, 20 third-place, 11 fourth-place and one fifth-place vote for a score of 116 points. He was the only driver other than Lanigan to be included on all 40 ballots.

After finishing second in the 2014 series standings while filling in for Richards in the Rocket house car, Eckert enters 2015 with a new team backed by Paul Crowl and Shawn and Lisa Martin of Viper Motorsports. One media member predicted Eckert to drive his new No. 7v MasterSbilt by Huey machine to the WoO LMS championship. Eckert also received eight third-place, 14 fourth-place and 12 fifth-place votes in appearing on 35 ballots for a total of 69 points.

Most press members expect Shane Clanton of Zebulon, Ga., to have a rebound season in the Weldbank Energy No. 25 Capital Race Car. Coming off a disappointing seventh-place points finish during a winless 2014 season, Clanton appeared on 21 ballots in earning the fifth spot in the poll with 35 points from two second-place, eight fourth-place and 11 fifth-place votes.

After turning heads with a solid fourth-place points finish in 2014, Morgan Bagley of Longview, Texas, was sixth in this year’s poll with 23 points. The driver of the P&W Sales No. 14m Black Diamond by Club 29 ride appeared on 16 ballots with one third-place, five fourth-place and 10 fifth-place votes. Former WoO LMS Rookie of the Year Eric Wells of Hazard, Ky., was seventh in the poll. The driver of the Wells Motorsports No. 18 Team Zero by Bloomquist car earned five points with one third-place and two fifth-place votes.

Three drivers tied for the poll’s eighth spot with two points each. Frank Heckenast Jr. of Frankfort, Ill., the 2014 Rookie of the Year who drives the Heckenast Racing No. 99JR Club 29 machine received a single fourth-place vote. He was matched by a pair of 2015 Rookie of the Year candidates in Mason Zeigler of Chalk Hill, Pa., and Jason Jameson of Lawrenceburg, Ind. Zeigler, who plans to follow the tour in his MZR No. 25Z Longhorn Chassis, received one fourth-place vote, while Jameson, who will race as a teammate to Lanigan in a No. 12 Club 29 machine, received a pair of fifth-place votes.

Series veteran Chub Frank of Bear Lake, Pa., and second-year competitor Chase Junghans of Manhattan, Kan., were the only other drivers to appear on a ballot with a single fifth-place vote coming in for each driver.

Richards was selected 13 times in voting for the winner of the Firecracker 100, a race he won in 2013. Lanigan, who claimed his first Firecracker 100 victory last season, was selected by 12 voters. Other drivers earning multiple votes as potential winners of the summer-starting event were Scott Bloomquist of Mooresburg, Tenn., (nine) and McCreadie (two). Receiving single votes were Eckert, Frank and Jimmy Owens of Newport, Tenn.

Lanigan also topped the USA Nationals voting, receiving nine selections to beat Bloomquist and Richards, who both had six votes. Lanigan won the prestigious event in 2012, Richards won in 2011 and Bloomquist is a five-time USA Nationals winner. Also earning multiple votes toward a USA Nationals victory were McCreadie (four), who won the race in 2013, Jimmy Mars of Menomonie, Wis., (four), Pierce (four) and Owens (three), who won last year’s race. Eckert, Clanton and Davenport were each selected once.

Screven Motor Speedway’s Winter Freeze kicks off the chase for the 2015 WoO LMS title with a pair of $10,000-to-win events Friday (Feb. 6) and Saturday (Feb. 7). Both events feature complete WoO LMS programs of time trials, heat races, last-chance races and A-Mains. More information about the Winter Freeze is available online at www.screvenmotorsports.com or by calling the track at 912-857-4884.